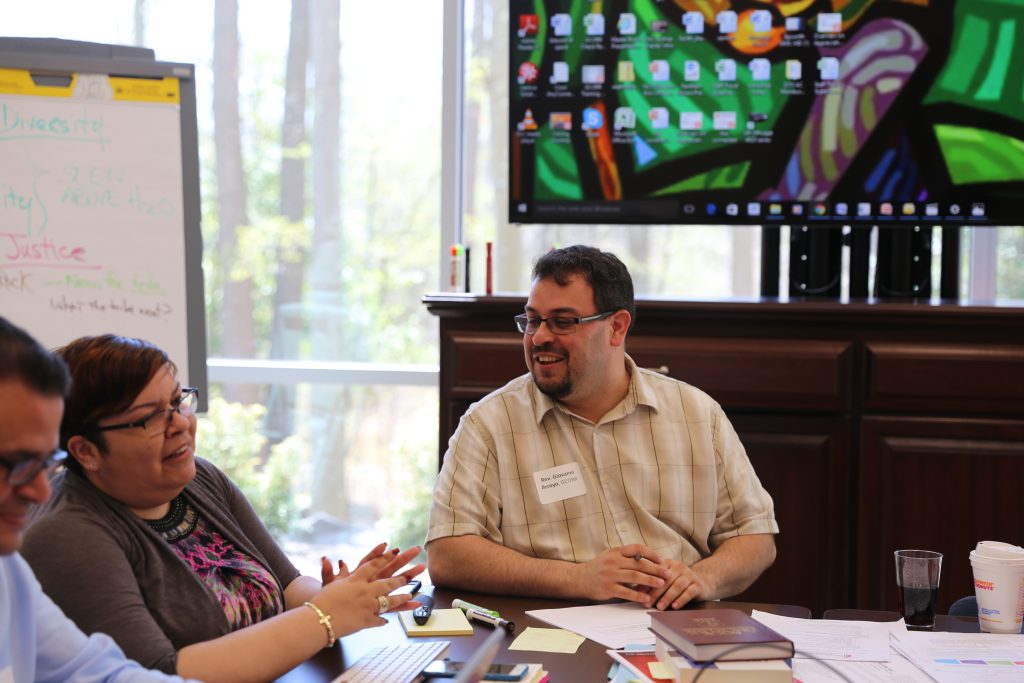 Rev. Giovanni Arroyo, Team Leader for Program Ministries of The General Commission on Religion and Race facilitates a meeting of the GNJ Cultural Competency Task Force at the Mission and Resource Center. Photo by Josh Kinney

A Cultural Competency Task Force made up of a diverse, wide-ranging collective of leaders from across GNJ, will propose an Executive Summary of a 10-year strategic plan at the 2017 Annual Conference in Wildwood. The plan’s goal is to develop GNJ leadership capacity and intercultural competence skills to lead a systemic shift from diversity to inclusion.

“Intercultural competence is critical to our mission of making disciples for the transformation of the world,” said Rev. Hector Burgos, Director of Connectional Ministries and a member of the Task Force. “It’s at the center of fruitful discipleship.”

Burgos said that the members of the task force, who represent the rich diversity of GNJ, have engaged the undertaking with “great passion and openness of mind and heart” with insights and wisdom providing focus, clarity and direction.

“It has truly been a privilege to help facilitate their work,” said Burgos. “My hope is that in the years to come, we grow as a connectional body in intercultural competence in such way that it becomes part of our DNA.  Intercultural competence allows us to be in relationship and ministry in our complex and diverse mission field so our congregations reflect God’s intended diversity already present in our communities and so all can live into their God-given potential.”

Rev. Giovanni Arroyo, a Provisional Elder of the Baltimore-Washington Annual Conference who serves on staff of The General Commission on Religion and Race, has led and facilitated the task force, acting as a resource for GNJ.

“Within this group there is a commitment to give our best,” said Giovanni. “It feels like what church should be.”

The conversations and vulnerability brought to the discussions from various ages, backgrounds and races have contributed to an understanding of the lenses through which many in the group view the world and their experiences.

“The receptiveness to hearing each other has been very powerful,” he added.

“How do we develop leaders that are culturally competent and able to work across a diverse spectrum?” Giovanni asked the group. “We need to work toward changing the culture of GNJ so that cultural competency is embraced in all that we do.”

The group meetings have created a theological framework as to why intercultural competency is important, and has engaged in a 10 year vision of what that could look like.

“We’ve had hard conversations,” Giovanni honestly expressed. “We’ve hit walls and had to stop to pray and discern.”

For most GNJ churches, the challenge is not a desire for diversity of race, rather there is often resistance to making the changes needed that make such diversity more likely. Churches typically realize their need for greater diversity, even in locations where the surrounding population is virtually from one race.

“All churches have gaps between the makeup of their churches and communities, whether it’s race, age, gender, education, economic status or a range of other differences,” said Giovanni. “Diversity is clearly an issue for all churches in the decades to come as the U.S. continues its greatest change in the diversity of its population in centuries. If we are to develop attitudes and actions that are necessary to live as authentic Christians in a complex and diverse world, we will need to effectively interact across differences.”

For GNJ, the benefit of being a highly diverse conference is the potential for intercultural competent leaders that can connect across those differences. The task force identified four specific audiences to build contextual cultural competency: clergy, laity, BOOM (Board of Ordained Ministry) and GNJ leadership and staff.

“As a team, we have a covenant among each other because we all come from different perspectives,” explained Giovanni. “No one is right or wrong and all are honored and respected.”

Deep conversations regarding forgiveness, justice, and reconciliation have been had among task force members.

“All of the participants in this process struggled with our own definition of what cultural competency is all about and engaged in conversation about what it is not,” said GNJ Lay Leader and task force team member, Rosa Williams. “This process was sometimes painful, but encouraged self-examination and I would venture that I left the table looking at cultural competency in a new light.” Williams believes that the ten-year strategic plan for GNJ is one that over time can change the cultural landscape of the conference.

“I know that GNJ is one of the most culturally diverse conferences in the United States,” said Lopez. “For that reason the work of this task force is of vital importance. We need to raise awareness among our people about the cultural diversity between us as a conference. We need to learn more from each other and increase collaboration between different caucuses and ethnic committees. I believe that we have common goals, and for that reason, we should work together and pool our resources.”

Lopez expressed concerns over cross-cultural appointments and immigration issues in the church.

“A lot needs to be done,” he said. “But the good news is that we already took the first step, we are working hard on a plan for the next ten years and we know that great things will come out the implementation of that plan.”

GNJ Director of Mission and task force team member, Nicole Caldwell-Gross, approached the first meeting with caution and skepticism but came away encouraged.

“It wasn’t just lip service,” she said. “These people genuinely struggled together and were committed to genuinely struggling together. I am encouraged by the fact that I live and work with people who are not afraid to take on something for the long haul and recognize that this isn’t a quick fix but requires our deep engagement and commitment over several years. I’m ready to continue this journey and let God lead it and walk alongside other leaders who are committed to doing the same thing.”

Within GNJ, 114 of 511 congregations are multi-cultural, which is defined as those with at least 30% of their membership being of a different race. Nine languages are spoken on any given Sunday during worship in local GNJ churches and there are 146 cross-racial, cross-cultural appointments. Amid GNJ’s forward leaning commitment to diversity, there is significant room to grow, with racial ethnic diversity representing 22% of conference membership, yet almost 50% for the state’s population.

Bishop John Schol commented, “GNJ needs to be shaped by the great diversity of our region as was the early Christian church as reported in Acts 10.”

The executive summary of the plan will be available in May to accompany legislation that is being presented for vote of the Annual Conference.