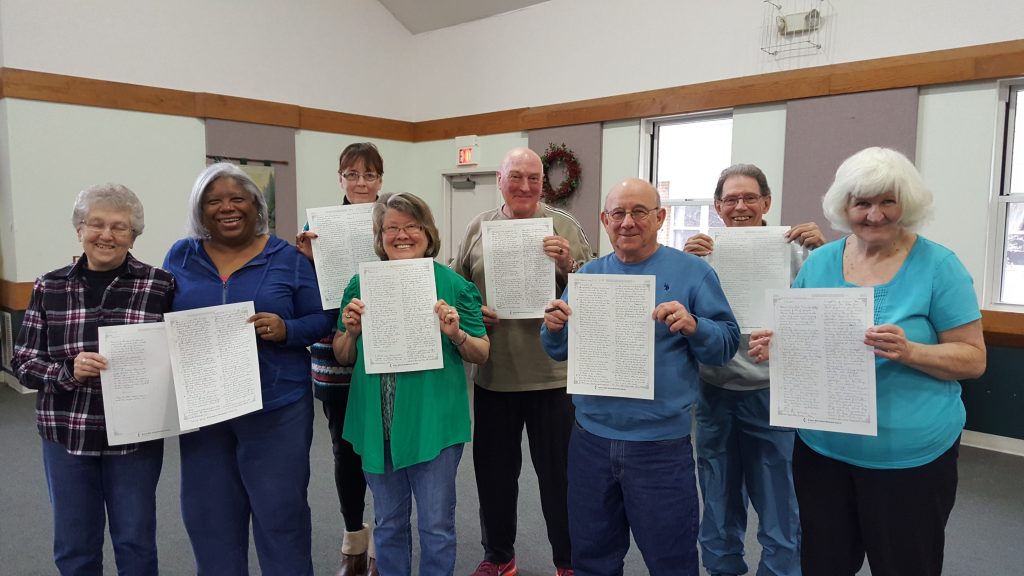 Before Guttenberg invented the printing press and produced the first typeset Bible in 1455 A.D., Bibles were painstakingly reproduced by hand. However, all were in Latin as was Guttenberg’s printed version. Early transcribers who dared circulate English language manuscripts of scripture in the 1380s were condemned by Rome; one was even burned at the stake in 1415 with English Bibles as kindling. It would be another 100 years for the Word to be accessible when Martin Luther translated the New Testament into German in 1522; the first complete English Bible was finally printed in 1535.

Now, many years and a variety of translations later, the advent of copiers, laser printers, and electronics have the Bible literally at our fingertips. Why then would someone want to step back in time and replicate the Bible in longhand?

The congregation at Browns Mills UMC was challenged by their pastor, Rev. Daeil Min, to do just that. Daeil was inspired by a similar project 30 members of the Westwood KUMC had completed a few years ago by writing the entire Bible in both Korean and English to mark the church’s  30th anniversary. Min had met Rev. Hark Bum Chang at a meeting and he had shared what his church had accomplished and how it deepened their faith. Two members even went so far as to begin personal projects to copy the Bible on their own as gifts for their children.

Min also had firsthand knowledge in how writing heightens learning. He began teaching himself English by copying a 400 page grammar book, not only once but twice; giving him a comprehensive view of the language instead of doing repetitive, isolated lessons. Scholars agree the motor skill of writing aids comprehension. We not only see what we are writing, we have to process the meaning of the words into our mind. We are not just copying letters in sequence but grasping the context of them in combination. They are actualized in our brain before our hand can execute the written form. So, we see, know and feel each character, word, phrase, sentence, paragraph and chapter. Writing is experiential.

Much like his learning exercise, Min thought the Bible project would be a way to become much more intimate with scripture as well as engage the members in a meaningful, collective Lenten meditation with individual devotions. It would also produce tangible evidence of the time and love invested in such a group effort.

Members of Browns Mills began meeting every Wednesday evening and Saturday morning in March for two hours of writing and fellowship. Between ten and 15 people attend each session for the shared experience that adds to the unity of the congregation. All ages contribute. The Sunday school children are writing Thessalonians; an eight year old is among them. A grandmother is writing along with her 11-year-old granddaughter. Two college students are squeezing this project in along with their studies at Drew University. One man with Parkinson’s disease has found the writing therapeutic, physically and mentally. All have learned more about each other, themselves, and the Bible through this project.

Each participant was asked to sign up for specific books they wanted to transcribe. But, those who did not get their desired sections felt they learned more by writing those books they were less familiar with. Sheila Hill asked for Psalms, but was given Leviticus. As she wrote it, it was no longer just a boring list of regulations, but became careful instructions to God’s beloved children. Candy Newhouse is writing Ezra and is finding that politics haven’t changed much but the amount of gold and silver to build a church certainly has.

The pages are large, 10×14”, divided in two columns with the church name at the bottom. As in Westwood, the completed pages at Browns Mill will be bound; the project is slated to be completed by this summer. The result will be an imposing volume instead of a compact pew Bible. However, another aspect of the project is how unique each contributor is. As our handwriting is distinctive, each page will literally have the signature and personality of the individual who so patiently wrote it. Future generations will be able to reflect on certain passages and recognize the source by the penmanship. Like the Bible itself, this reflects that many people actually contributed to it. And, not unlike a church, each member has a voice yet is truly an integral part of the whole.