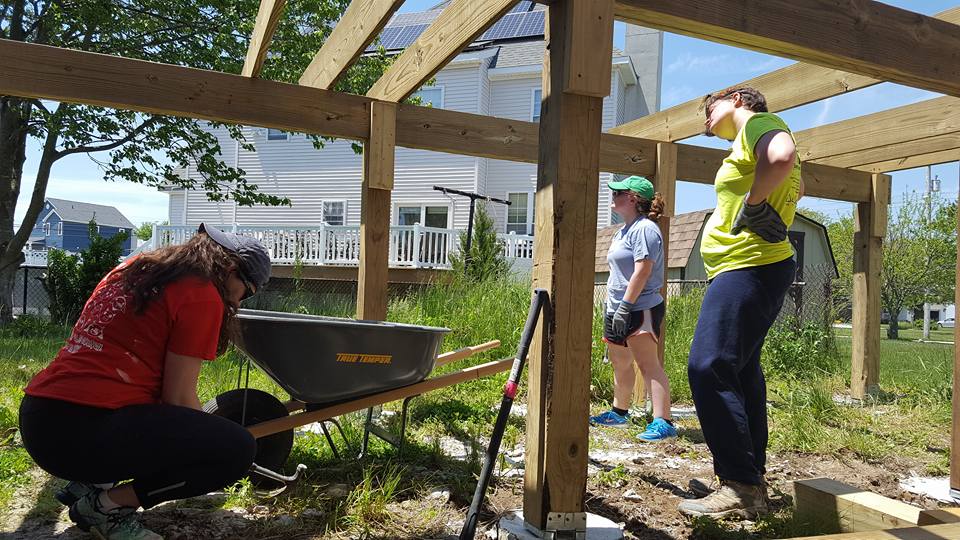 Students from the University of Mary Washington’s Campus Christian Community in Fredericksburg, VA, spent an inspiring, faith-growing week working with A Future With Hope in Brigantine and Toms River. Photo provided

BRIGANTINE / TOMS RIVER – Standing in the ocean with the waves gushing and swirling around her feet, Grace Rice found it hard to believe the very same water could turn violent enough to wipe out the home she had spent the day working on.

Last May, Rice was one of five students and two leaders on a mission trip to help with A Future With Hope’s Superstorm Sandy recovery efforts in Brigantine and Toms River. The group from Campus Christian Community at the University of Mary Washington in Fredericksburg, VA, spent a week painting, spackling, reflecting, and praying; grappling with the challenges of the ongoing rebuilding process at the Jersey Shore.

“It was surprising for us to see how much work there still is to be done even though it has been almost five years since the storm,” said Rev. Shannon Waite, Campus Minister. “On our first day, we learned that there are still roughly 3,000 people without homes.”

Waite described meeting one of the home owners as a moving part of the experience.

“It was wonderful to see the excitement that he had to have the students there working on some of the finishing touches to his home,” she said. “After years of living on friends’ couches and apart from his wife, who was disabled and moved in with her mother an hour away, he was finally going to be able to move back into his home with his wife just a few days after we finished!”

The energy was contagious for the group, leaving New Jersey “grateful” and “inspired.” In the midst of their work, the group members were given a list of questions designed to help them get to know each other and go deeper in their faith.

“When you are off the worksite it’s hard to remember that the community is still rebuilding from the storm and it’s even harder to remember when you live several states away,” said Rice, who had returned for a second year on the mission. “Throughout the year I did not give Superstorm Sandy recovery efforts much thought at all. Going back helped the reality of the situation sink in.”

Rice expressed frustration at the start of the trip because she felt the group’s work didn’t seem “big or important” but later came to appreciate what they had done after seeing the happiness in the families they had helped firsthand.

“Leaving New Jersey encouraged me to work on putting others before myself and to continue being a light,” she said.

Katie Hartraft said the mission trip was the best conclusion she could have ever had to her freshmen year of college.

“The trip brought with it lots of smiles, sore muscles, and laughter,” she said. “Our tight-knit group worked very cohesively together. No one was an outlier – we all played off each other’s strengths while poking fun and sharing laughs everywhere in-between.”

For a while, Hartraft had debated on going on the trip.

“It was a much more fulfilling experience than I had previously imagined,” she said.

There is more work to do. Those interested in rebuilding homes and renewing hope for New Jersey families are encouraged to take part in one of these fulfilling experiences by visiting www.afuturewithhope.org/volunteer