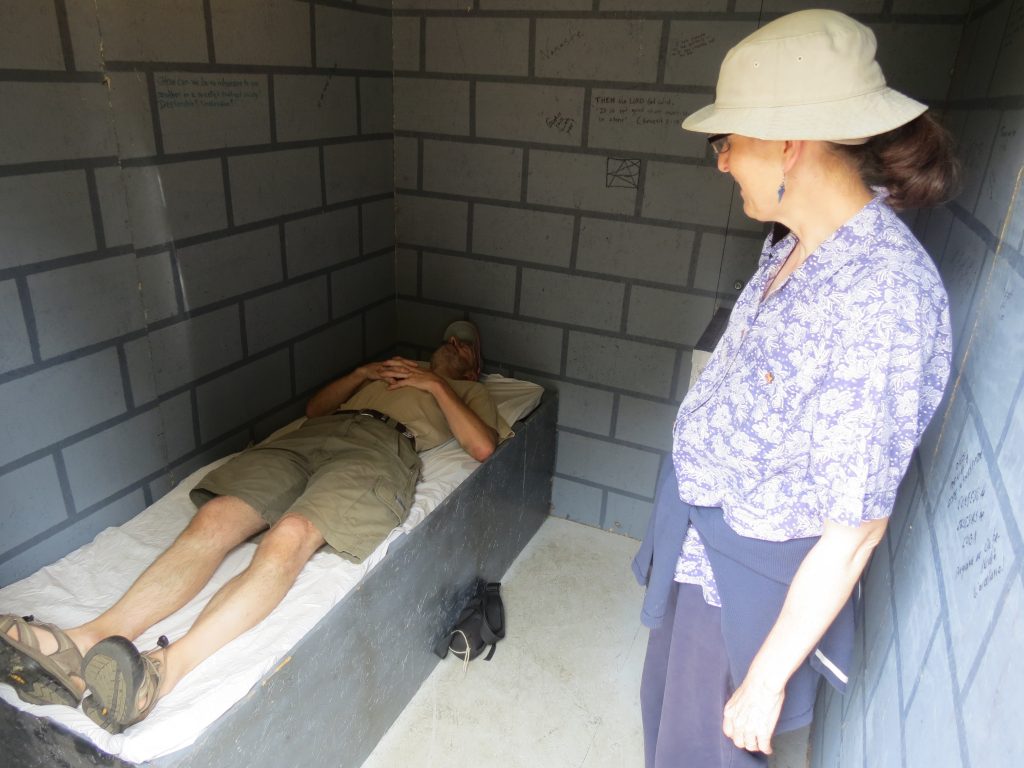 In September, Waterloo UMC in Sussex County continued the United Methodists Church’s long tradition of raising concern for social justice  by hosting a Solitary Confinement Awareness Conference.  Pastor Tim Nicinski, who had previously worked in law enforcement, was inspired to organize the event after attending the Criminal Justice Reform Forum which was hosted Senator Cory Booker  and included the participation of  Bishop John Schol last year.  At that meeting, he learned about how incarceration and solitary confinement disproportionately impact low income people and people of color.  He has continued to learn about the traumatic effects of solitary confinement and mass incarceration, an often ineffective deterrent to crime.

At the historic Waterloo Village state park, where the church is located, visitors were able to step inside and experience a life-size replica of a solitary confinement cell.  The cell was complete with a soundtrack of screams, banging, and noise recorded in an actual prison.  The contrast between the loud, confining, windowless cell and the wide open space, fresh air, and peace of the canal village was striking.

The conference was co-sponsored by the National Religious Campaign Against Torture, American Friends Service Committee, and the Campaign to End the New Jim Crow.  These organizations seek to share the many devastating stories, like that of Anthony Graves.  Anthony was arrested at 26 years old and spent 18 ½ years in prison, including 16 years in solitary confinement for a crime he did not commit.  The United Nations’ top experts on the human rights of people in detention define solitary confinement exceeding 15 days as torture.  Anthony was pardoned and released in 2010, as the 138th exonerated death row inmate in America.

Participants watched the  documentary “Breaking Down the Box” and heard  from Susan MacDonnell, a volunteer with the Campaign to End the New Jim Crow.  They  learned about the mental health effects of isolation as a result of solitary confinement including insomnia, paranoia, uncontrolled feelings of rage and fear, an increased risk of suicide, and post-traumatic stress disorder  Extended isolation and minimal social interaction can actually alter space and depth perception and directional positioning.  .

In the United States, the  criminal justice system is currently based on retribution for crime.  The  United Methodist Church’s Social Principles support restorative justice.

MacDonnell, who has her M.Div. from Drew University, became passionate about prison reform while taking a “Beloved Community” class held at the Edna Mahan Correctional Facility.  She shared information about the current status of New Jersey legislation and how to contact state representatives in support of system reform and limiting the use of solitary confinement.  To learn more, MacDonnell recommends reading ‘The New Jim Crow’ by Michelle Alexander.  You can take action by contacting elected officials and visiting the website for the National Religious Campaign against torture at  www.nrcat.org.