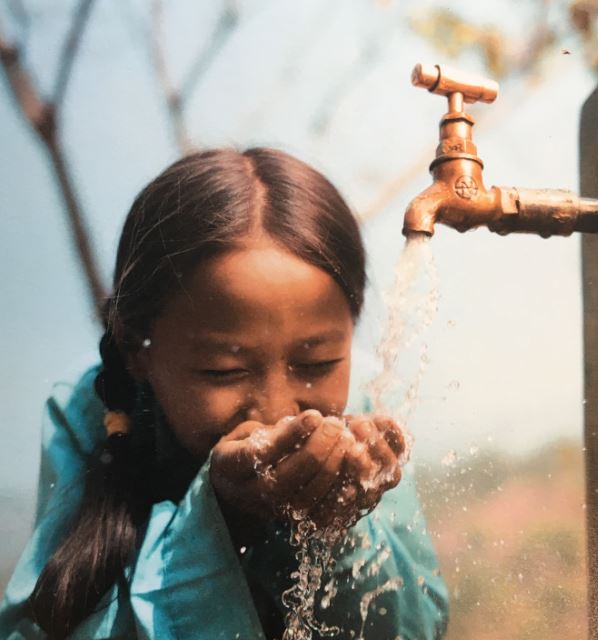 A young girl drinks from a newly installed well similar to the one Ballard UMC has raised funds for to create a miracle for the people of Malawai in Southeast Africa. Photo provided by Ballard UMC

ASBURY PARK – As an active 28-year member of the Ballard United Methodist Church in Asbury Park, Margaret Barton was a dedicated woman who listened and answered God’s calling at a young age. Her vision as a servant of her strong faith was to become a missionary and she was later sent to Liberia where she taught young girls a variety of skills. Although her father was not pleased with her decision to embark on such a long journey across the sea, leaving her friends and family behind, Barton knew it was God’s will and set forth to serve others.

When Barton passed away in April 2014, her beloved church knew they wanted to “do something special” in memory of their dear friend and treasured church member. As a result, Ballard UMC embarked upon their own journey to build a well in memory of Barton.  They partnered with Charity Water, a non-profit organization which brings clean and safe drinking water to people in developing nations, realizing that there are 663 million people on this planet who don’t have clean water.

“After Margaret’s death we thought what better tribute to her than to build a well which would provide pure, safe water so essential to life for an entire village in Africa, continuing her missionary work of serving God and serving others,” Virginia Richart, a 65-year Ballard UMC member and President of their United Methodist Women (UMW) group, said. “We had heard about building wells from Farmingdale UMC President Donna Jordon when she spoke at one of our meetings prior to Margaret’s passing. We decided that it would be a great way to remember Margaret since she served as a missionary in Liberia.”

It has taken over three years to reach the church’s goal of $8,000.  . The well-building process has already begun and will be located in Malawi, Southeast Africa, providing fresh, clean water to over 200 people. According to Richart, Charity Water will keep the church informed as work progresses and upon the well’s completion the church hopes to hold a celebration.

“After her time in Liberia, Margaret returned to the U.S. and worked for the Board of Global Ministries in New York and continued to devote her life to the betterment of others,” said Richart. “While employed by the United Methodist Homes of New Jersey, her ministry continued as she traveled throughout the state helping people find and make their transition to another way of life. She was compassionate and devoted to studying the Bible.”

Richart said she and Barton were close friends and prayer partners. She called Barton “straight as an arrow” who knew “the rules were the rules.”

“She was in her 80’s when she passed away but lived her life following the Ten Commandments to the letter. Although she was small in stature, she stood tall for the downtrodden. She was so gentle, kind and full of compassion. She loved butterflies and when anyone saw a butterfly we always thought of Margaret,” she added.

Richart said that the task of the well project was a bit daunting at times but church members knew God would see them through it.

“There were times when we wondered what we were thinking for such a small group to take on such a huge task. But when that happened we knew that God would provide and give us the courage to keep on keeping on,” she said. “Building a well to provide fresh, clean water means children can attend school instead of walking miles.”

Richart believes that building a well is a unique way to remember Barton’s life because her calling was to help people “who had nothing.”

Richart continued, “She felt called to help the women and the children in Liberia. She did all she could while there. Building this well in her memory is a distinctive way of extending her work beyond her life. I am sure Margaret is smiling right now.”

Ballard UMC is located at 1515 4th Avenue in Asbury Park. For more information about Charity Water visit their website at charitywater.org