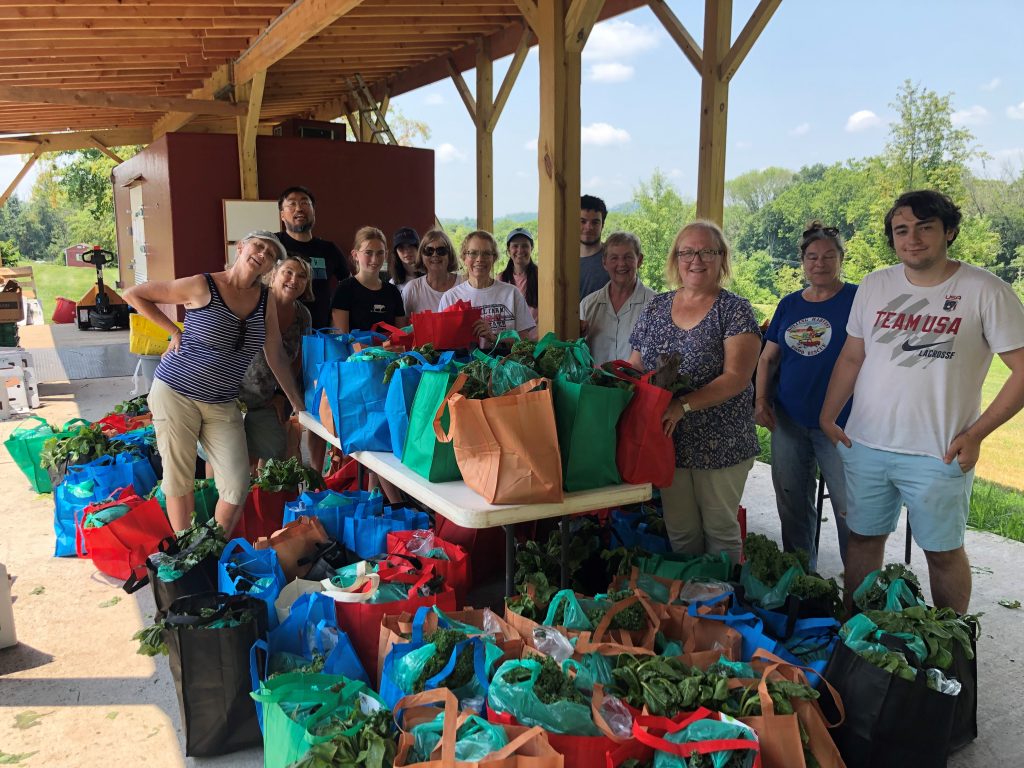 “They gave us beets!” exclaimed a senior citizen as she pulled a bunch out of her  allotment bag.  “And they’re the golden kind!  When told the beets were organic, she heartily responded, “God Bless you!”

Produce included: potatoes, jalapeno peppers, beets, kale, lettuce, tomatoes, potatoes, radishes, cucumbers and squash, all obtained from local farms including Titusville’s Gravity Hill Farm, Zone 7 Farms as well as corn from the None Such Farm. In addition, cartons of organic eggs were provided by Alderfer Farms. All this food is purchased at cost most of the time, and some of the farmers donate their products.

The day before distribution, 14 PUMC Missions members met at Gravity Hill Farm to assemble the 100 bags for distribution. The team worked well together, enjoying the lively Christian fellowship of “kindred minds” with others from the local community. Within two hours, the many large bags were filled and stacked into Rolling Harvest’s new refrigerated truck that would keep the produce cool overnight until transport the next day.

Early the next morning, the first distribution team of three mission members from PUMC began unloading Rolling Harvest’s truck at Homefront’s Lawrenceville headquarters. They arranged the 100 shopping bags onto long tables near the loading docks, transforming the entire area into an oasis of color.

Midmorning, the second distribution team of four mission members and Rev. Joseph Jueng, began handing out the large shopping bags plus smaller bags of corn and cartons of eggs to 75 Homefront families. The other 25 bags and extra boxes of corn were later moved to the Ewing Homefront Family Campus and distributed to residents there.

From 11:00 a.m. to 2:00 p.m., the bustle and noise of nearby busy streets hardly penetrated the calm and peace of the Homefront distribution area. Families were consistently pleasant and polite; their children appeared well cared for and relaxed. Whether giving or receiving, each participant lived in the moment, enjoying positive experiences and blessings of being human. All were grateful for the Rolling Harvest Farmers Market experience.

To find out more about this mission, visit http://rollingharvest.org and www.homefrontnj.org.