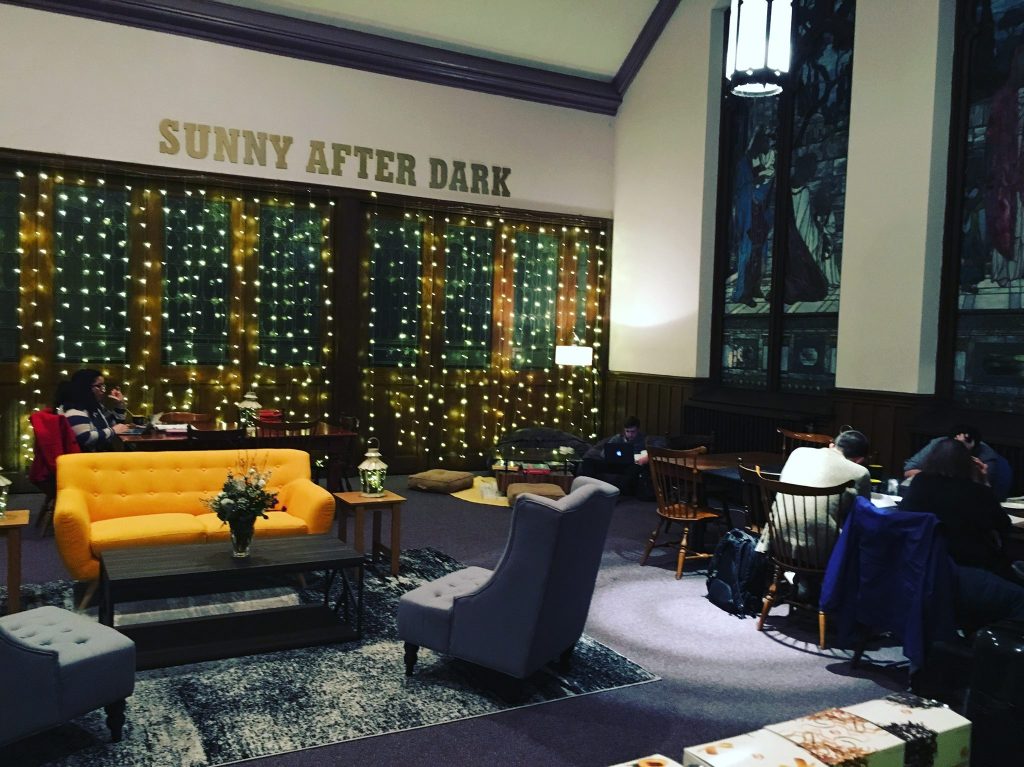 What initially opened for Princeton University students as a night-owl operation has quickly become a welcoming place for not only undergraduates and graduates, but the community at large.

Everyone is welcome at The Feed Truck Cafe, according to Erik “Skitch” Matson, Wesley Foundation Director at Princeton University and Youth Pastor at Princeton UMC. The Cafe, a project of Feed Truck Ministries Inc., a Christian non-profit organization, in cooperation with Kingston UMC and supported by GNJ along with the General Board of Higher Education and Ministry of the UMC, is an extension of The Feed Truck ministry that exists to foster spiritual engagement and a love of neighbor among young adults in Central New Jersey, particularly on or around the college campuses of Mercer County.

Housed within Princeton UMC, The Feed Truck Cafe is located across the street from Princeton University in the heart of the town’s downtown.

Hot coffee, cold brewed coffee, espresso drinks and bakery items from local businesses are just some of the items on the menu. At The Feed Truck Cafe, Matson said, “We want to provide a place of sanctuary for students where they can thrive academically, socially, and spiritually.”

“Not only is The Cafe located literally in a church sanctuary, we want the cafe to be a place of sanctuary in the sense that it is a safe place where people are able to be exactly who they are, with no strings attached, and know that they are loved and valued,” he said. “By opening our doors on Thursday, Friday and Saturday nights, we are providing an alcohol-free space for the community to engage in relationships as well as an anxiety-free space for students to study for finals.”

“We have had a Bible study going on in one corner, while final papers were furiously written in the other corner,” he added.

The Feed Truck Cafe started as a conversation between key players in the United Methodist Church around the Princeton area. Because Princeton UMC’s building is directly across from campus, there were hopes to engage more students in the local church and to increase the revenue of The Feed Truck during the times it went into “hibernation;” the winter months.

Support for the project came from Greater New Jersey, Kingston UMC, The Feed Truck and the Wesley Foundation at Princeton University.

According to Matson, there are other cafes in the United States, such as the Princeton one, but none that “we know of in New Jersey.”

“California, Texas, and Florida have had flourishing cafes in churches that create welcoming environments for young adults and others. While we aren’t new to the national scene, we believe we are the first of hopefully many similar endeavors in Greater New Jersey,” Matson said.

The missional outreach projects of The Feed Truck Ministries, Inc. are typically built on three pillars – food, work, and neighbor. The pilot project, The Feed Truck, based at Kingston UMC, is a vehicle for ministry to and with young adults in the Kingston/Princeton area. The Feed Truck Cafe, located at Princeton UMC in downtown Princeton, is a pop-up cafe founded on the same three pillars, according to Matson, but specifically geared toward the students of Princeton University who live just across the street.

Matson, who said he has worked in camp, college, and youth ministry during the past ten years, “has had engagement with many young people across the country.”

“Just about every church is wondering how to get young people into the pews on Sunday mornings and how to connect with the local community to make sure that others know the church is present for and with the community. The Cafe is seeking to connect with both of these,” Matson said. “While we don’t expect that every young person who walks into The Feed Truck Cafe will automatically show up at church on Sunday mornings, we do know that by creating a warm, welcoming and safe environment that is housed within the church, we are creating a connection for that person that tells them they are loved and welcomed in this place.