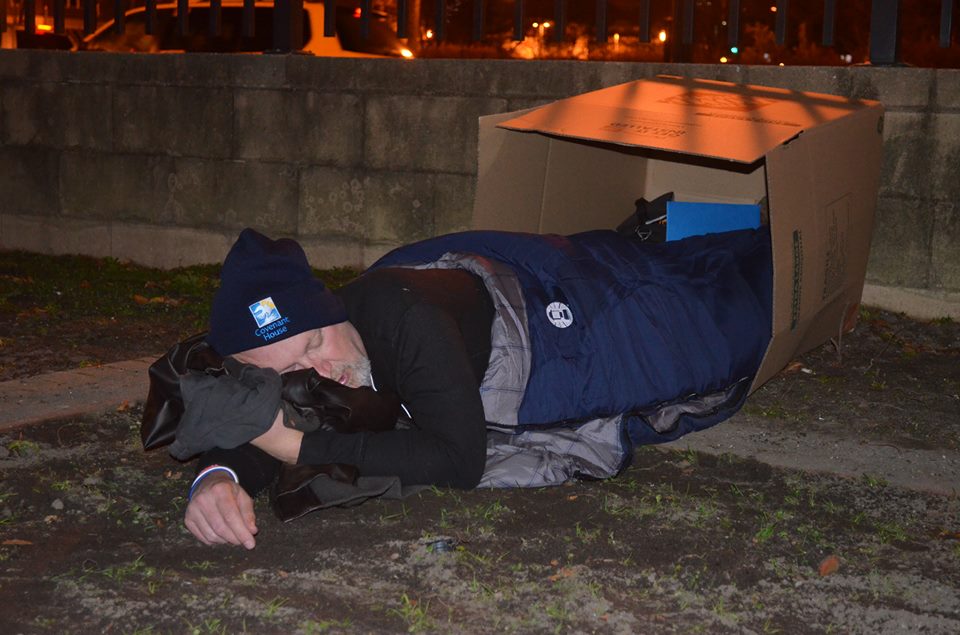 Rev. Delaney’s home for the night was a two part box. Legs are slid into one of the boxes first and while the second box is pulled over the head until the two boxes meet, providing 360 degrees of shelter. Photo provided

WESTVILLE – Pastor Dave Delaney of St. Paul’s UMC in West Deptford joined Dee and Ish, the owners of the Piston Diner in Westville to sleep in cardboard boxes on the street on Oct. 26. They did so as part of a nationwide demonstration on behalf of Covenant House, a nonprofit organization serving homeless young people in the U.S. and Canada.

In an effort to raise awareness of the plight of homeless youth, Delaney took to the street and documented his experience on social media, reaching hundreds of friends and followers.

“These kids have mental health issues, some already have drug issues,” said Delaney. “But some are just your average, everyday kid. For some of them, maybe their home life is not good.”

Since 1972, Covenant House has been opening doors to homeless kids and now stands as a powerful human rights movement for vulnerable youth in 31 cities across six countries. For more than four decades, the organization has helped transform and save the lives of more than 1 million homeless, runaway and trafficked young people offering support services to those in need.

Joan Tapken Benedict posted pictures to her Facebook account of Delaney setting up his cardboard box outside the Piston Diner.

“Trying it on to make sure it fits,” she wrote. “Stay warm Pastor Delaney. Luv your spirit and the way you’re always out there for the less fortunate.”

In the wake of the recent disasters brought forth by hurricanes, Delaney said its “easy to forget that each night teenagers are on city streets across America living in danger.”

After many years working with teens, the cause has inspired Delaney who has no problem begging friends for support.

“As I’ve gotten older, I’ve come to realize the importance of using the time we have to help others,” he said. “I try to do my best to be a voice for those who are hurting in the world, for the disadvantaged, the helpless, and the disabled. I have always tried to not just be a man of words but one of actions who won’t hesitate to go out on the streets, into the dirty corners where the hurting sleep, and to continue to wrap my arms around those whose lives have been impacted by poverty, mental illness, and drug abuse.”

Having seen, listened to, and held young men and women in their late teens and early twenties living out on the streets and officiating at their funerals, Delaney said he knows that each person reached by Covenant House has a chance to survive.

“Sadly, lost kids are still on the streets of the wealthiest nation in the world, waking up in their boxes, abandoned buildings, cars that no longer can be driven,” said Delaney. “But Covenant House staff will be looking to find and rescue them and that’s why I sleep out.”

“Pastor Dave is taking care of the hard part – sleeping in the cold outdoors tonight,” said churchgoer Gary Rutter. He continued, “And I’ll be doing the easy part – eating a nice hot meal in the warm Piston Diner in support of this vital mission project.”

“You can always find Pastor Dave on the front line,” said Johnny Ordille. “Putting himself out there to help those in need.”

For the last five years, Delaney has slept out to raise awareness and funds for the cause he’s passionate about. This year, he expanded the sleep out because his friends decided to join him as a preview to Covenant House’s national sleep out on Nov. 16-17, where Delaney will sleep out on the streets of Atlantic City.

“I tear up knowing kids are back on the streets tonight,” he said. “They’re desperately needing a loving face and voice encouraging them to come to Covenant House.”

Find out more at www.covenanthouse.org