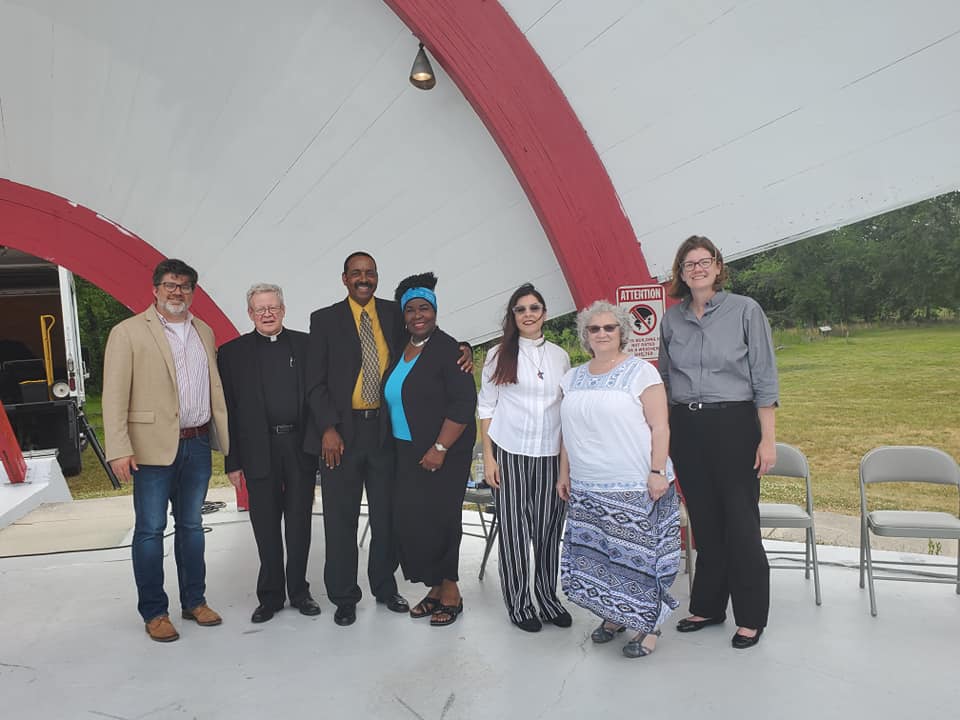 “Where the treasure is, there will also be your heart.”—Matthew 6:21

It was June 2019, and Yeika Huertas was full of hope and loads of missional experience as she traveled by herself from her hometown of Arecibo, Puerto Rico, one of the oldest colonial towns founded in 1616 to a town founded more than two hundred years later in Cumberland County, NJ, called Vineland, also known as “The Land of Accidents.” Her daughter, Alanis stayed in Puerto Rico to attend college, and her husband, Carlos would come one year later.

Just months earlier she had been appointed as a senior pastor at First UMC in Vineland. Clearly those who decided on her cross-cultural appointment saw something in Huertas that made them realize that she was the right fit. It quickly became apparent to me that they were right.

“I started just before the pandemic hit, so it was definitely a learning experience in so many ways,” said Rev. Huertas, a pastor since 2011 who speaks of her commitment to God often with love.

Two years later, she is opening her church and her heart to those in need every Wednesday morning from 9:00-11:00 a.m. as part of the Vineland Ministerium’s Emergency Food Bank. When needed, they also deliver food outside that designated time and share additional items during the holidays.

The Clothes Closet Ministries offers a complete clothes closet to the public. It has men’s, women’s and children’s clothing. Children’s clothes are in sizes from infant through teen. There also are shoes in all sizes, and the clothing is gently worn and free.

“We try to be as nimble in this ministry as possible,” said Huertas.

First UMC’s mission is to support a thrift store with used clothing and a food pantry, partnering with Spirit and Truth Ministries, a nonprofit that has assisted the poor and homeless in Vineland and surrounding areas for over 25 years. The church became one of A Future With Hope’s Hope Centers in 2020 after receiving a grant from Global Ministries.

“We try to be pertinent to our community every day,” said Huertas, who is an elder in full connection with Puerto Rico Methodist Conference and received a M. Div. from Puerto Rico Evangelical Seminary in 2011. The demographic of her community is mostly Hispanic (primarily Mexican) and Black.

“We provide the kitchen and the social hall for their soup kitchen, where they cook and offer hot meals, serving at noon Monday through Friday,” said Huertas, who added that they also provide monthly activities in our parking lot and provide portable showers and bathrooms, a vaccination site and other services.

Huertas added that many in her community are plagued by unemployment and a lack of school preparation, which further exacerbates their current situation.

Having served youth ministries, Walks to Emmaus, Chrysalis from the Upper Room, as a missionary within and outside of Puerto Rico and as superintendent of Northwest Region, Huertas is clearly comfortable working with marginalized communities and embraces love, mercy, justice and dignity every day.

“There’s hope. There are still people who are willing to fight for change,” said Huertas. “I don’t have any doubt that I’m here because of God.”

Part of her career was spent in Honduras working with a poor community, many of whom were handicapped children. She also helped in the aftermath of Hurricane Maria in Puerto Rico.

In addition to the Hope Center, Huertas said once a month she and her church host a grieving forum where they read the names aloud of those who have died. In an effort to make it an ecumenical service, she invites other clergy including a local rabbi, a monsignor, a Lutheran pastor and two Baptists.

Huertas is passionate about Christian education, Wesleyan traditions and teachings, social justice, children and pastoral care. In her free time, she is also a pet lover and Star Wars’ fan, loving to quote Yoda, “A Jedi must have the deepest commitment, the most serious mind.”