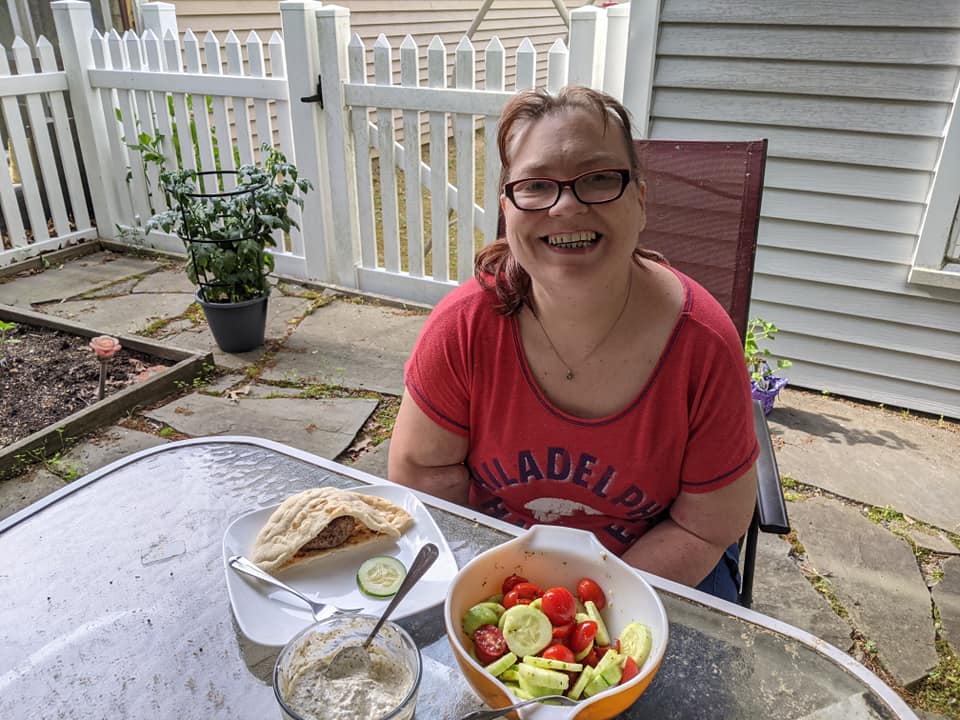 Each day for 12 consecutive hours, Megan Delaney is attached to a long plastic tube so that she can stay alive.

Peritoneal dialysis involves using the peritoneum in her abdomen as the membrane through which fluid and dissolved substances are exchanged with the blood. Through a surgically inserted catheter, excess fluid is removed, electrolyte problems are corrected, and toxins are removed. Her mother, Donna administers it each day so that Megan can stay alive. Twice a day she also needs to be weighed to ensure that she is maintaining her weight and not putting too much stress on her kidneys.

Megan was born with two small kidneys, in addition to cerebral palsy with a significant educational disability and a seizure disorder, but none of this ever stops her from smiling or showing people they matter each and every day. You might also catch her playing with her dog, Tyler, gifting her homemade braids she makes or watching one of her favorite movies, “The Hunchback of Notre Dame.”

“Megan is renowned for her hugs,” her father told me one day recently. “When she can’t think of what to say, she gives a hug,” said Rev. Dave Delaney of St. Paul’s UMC Deptford. Donna called them “hugs that you don’t forget.”

All 4’11” of this 36-year-old shows the love of God wherever she goes and with whomever she meets. Hugs aren’t possible for her 88-year-old grandmother in Florida, so Megan instead calls her four times a day, so she never forgets that she cares.

“She has hugged senators, governors, celebrities, Academy Award winners and congressman as well as homeless people and prostitutes, all with the same genuine love,” said Dave who along with his wife, Donna are determined to locate a living donor for their child, in between doing ministry for Dave and caring for others with chronic illnesses like Parkinson’s for Donna.

They set up a Facebook page called “Kidney Hugs 4 Megan” to get more visibility for their cause and to share photos of Megan. Between the three of them, there is never a shortage of love, laughter and yes, hugs, even the one-armed ones.

“There’s not an ounce of bias, dislike, prejudice or hate in Megan,” said the father of two. He recalled how while working at a nursing home for about 11 years, Megan poured out her heart to dying patients so much so that she earned the reputation of being the most loving employee, one that was mutually missed during the pandemic.

“The hugs make me feel better too,” said Megan. “When I lost my two friends, I was pretty upset, and hugs helped.”

Megan was born with her umbilical cord wrapped around her neck. Eighteen months later she suffered a massive seizure. In her early-20s during a visit to her neurologist, it was discovered that her kidneys were small and ceasing to function normally.

Since that day, she has been on a waiting list for a kidney transplant from a healthy donor with the same Type O+ blood.

Underneath all the smiles and compassion are frustration and worry. “Few people understand how it is,” said Dave who works every day to make sure Megan’s life is as normal as possible. In between teasing, water gun fights and attending Philadelphia athletic events much to Dave’s chagrin as a Buffalo fan, they cook together, creating masterpieces from around the world in the kitchen.

But in addition to the waiting list for a kidney is another list—the list that continues to grow of things she plans to do once she receives her new kidney.

When asked what she is going to do first, Megan said, “I want to sleep over someone’s house,” most likely at the house of her sister, Colleen, so she can also spend time with her nephew, Ryan. “Then I want to go to church.” The young woman, a champion of the less fortunate, also dreams of going to Paris one day to see Notre Dame.

Dave recalled how 10 years ago he, Donna and Megan attended a Peter, Paul & Mary concert in Ocean Grove. Peter Yarrow, likely seeing the beauty of Megan within, introduced himself, inviting Megan to sit next to him while he gave out autographs. He even asked her up on stage to sing “Puff the Magic Dragon” with him.

“I was so scared standing on stage,” said Megan.

But two years later while at another one of their concerts, Peter recognized Megan and even remembered her name. “This is the kind of impression that Megan has on others,” said Dave, who remembered how once again, Peter asked Megan to assist with autographs, a mission she embraced with a smile and conviction.

When asked what makes her happy, Megan said, “My family makes me happy…and getting to pet a pig.”

“We are waiting for the greatest gift that Megan deserves to receive, but it’s one we can’t buy.  We can only hope that one of you has a gift ready to share with her,” said Dave.

It was once said, “The purity of a person’s heart and soul can be quickly measured by how they regard animals.” Megan’s heart is pure, kind and charitable. Her indelible smile, infectious laugh and intense sense of loyalty and passion for living and loving others resonates in the hearts of those who have had the pleasure of meeting her.

Please visit Megan’s FB page at “Kidney Hugs 4 Megan.” It can be reached at www.facebook.com/KidneyHugs4Megan. Register to be a donor or just share this with everyone you know!

Sidebar: What is involved?

Currently, there are about 100,000 people waiting for a healthy kidney. The kidney donation process involves the surgical removal of one kidney from a healthy donor and transplanted into a recipient in need. In a healthy, approved donor, the remaining kidney is able to compensate for the removed kidney by increasing its functioning capacity. A kidney from a living donor lasts about twice as long as one from a deceased donor…and it’s more likely to avoid being on kidney dialysis.

It’s important to recognize there can be benefits to the donor, as well as the recipient. Some of these are: