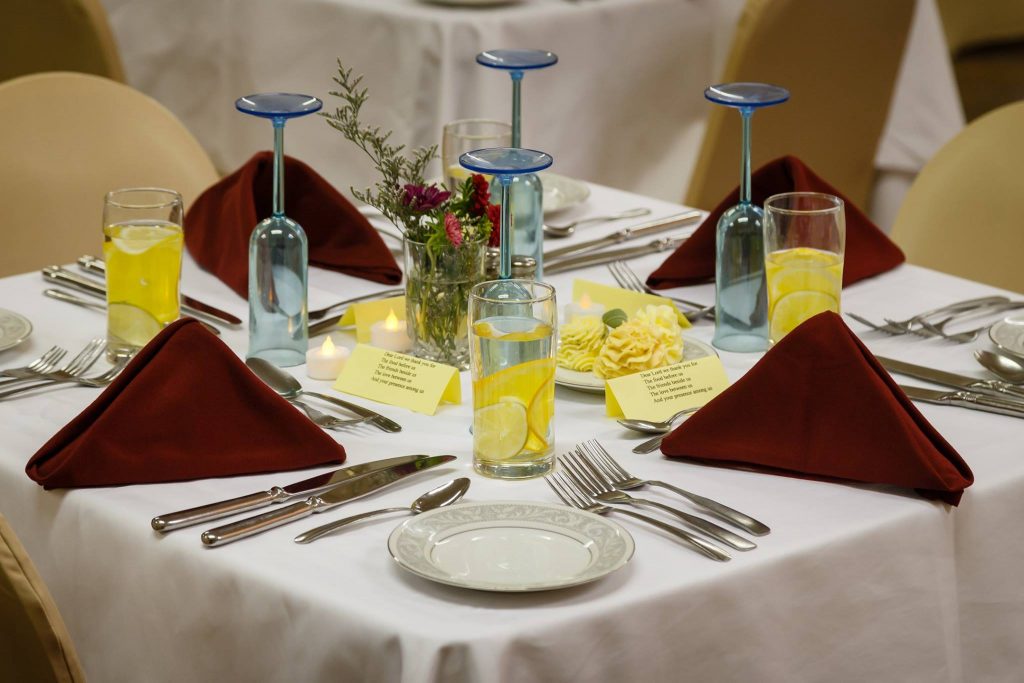 Central UMC in Linwood transforms a four-star dining experience raising funds for mission in the community and becoming a staple of the neighborhood. Photo provided

LINWOOD – Transforming a 100-year-old church hall into a four-star dining experience is no easy feat. But that’s exactly what church members and volunteers from Central United Methodist Church in Linwood did recently when they held their bi-annual mission dinner in the church’s Adams Hall.

For James Murphy, Central UMC member and co-founder of the “gourmet dinner,” it has been more than five years since the vision for such a dinner came to him one Sunday after church.

“I was looking at the kitchen and the space and God said to me, ‘why don’t you do a sit-down dinner and give the proceeds to the church’s mission?’ But the vision did not come to life until I volunteered to serve God. I helped cook at our chicken barbeque event and ran into our pastor. Little did I know that he would mention my name three months later for a church consecration luncheon,” said Murphy. “I met four people at a meeting for the luncheon and mentioned that it was God who brought me to this meeting and told them my vision for the gourmet dinner. It was there I met Sal DeRose  and he, John Pozza, Bob Palamaro, Terrie Moore and Gary McGuire started the dinner with me.”

That was five years ago and now thirteen dinners later, Central UMC has helped raise more than $40,000 for local charities. Their most recent gourmet dinner at ‘Missions Restaurant’ raised $6,230 for charities including The Community Food Bank of New Jersey, The Church Scholarship Program, Kitchen Improvements, Habitat for Humanity and the Murica family who lost everything to a house fire. All of the proceeds from the dinners go to select charities. In years past other charities who have benefited include The Rescue Mission, Red Bird Mission, Missionaries in Uganda, Sister Jean’s Kitchen and the Special Olympics.

“This is a special event for us because we serve amazing food for the price with exceptional service,” said Murphy. “We get to give back to our community. It helps reach beyond the church’s walls and the local community has heard about our gourmet dinners. The church is an active partner in giving back to many charities in our community.”

More than 87 people helped to make this last mission dinner a huge success. Preparation begins three months in advance and the dinner itself takes about two full days to prepare, according to Murphy.

“It also takes two days to transform Adams Hall into a gourmet dinner setting and 87 people volunteered to help set up, prep, cook, wash dishes, polish silverware, run the dinner and clean up,” he said. “We have eight chefs in the church congregation and ten chefs in the kitchen, fifteen servers, a maître d’ and six beverage servers. My role is in helping plan the menu with John Pozza, coordinate, secure donations of food, staffing, prep, plate, cook, talk to guests and help wherever is needed.”

The mission dinner is a hot ticket in town, typically selling out all 120 seats in 30 minutes on a Sunday after church services. The cost for the dinner is $45.00 per person and anyone can attend. The food for the evening is donated and provided by over 20 local businesses and restaurants.

Murphy, who is a chef and a graduate of Johnson and Wales in Providence, Rhode Island, added that the event’s continual success for the past five years means more than words can express.

“The purpose of our dinner is to serve gourmet food and raise money for God’s Kingdom. We started out with this purpose and goal but what came out of it was more than I could have imagined. The fellowship from these dinners is amazing,” he said. “This is the true glory of God working to build relationships. God has glorified this event. Without God it would not be what it is.”

For more information about the Central UMC in Linwood contact the church at 609-927-4882.