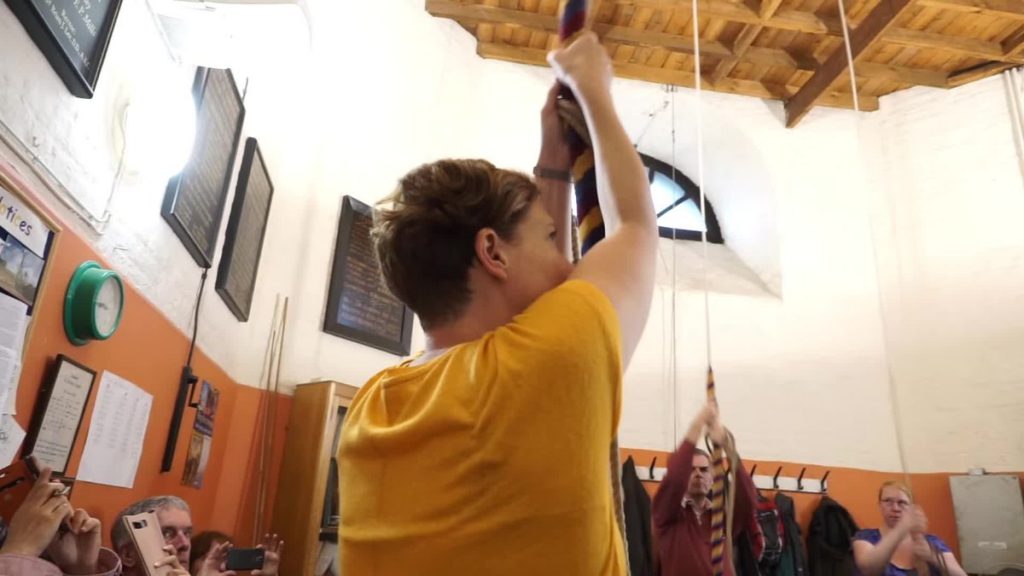 She had been looking forward to it for years and now it wasn’t possible. Ten-year-old Arnella, was finally tall enough. In her church, down the street from her home, in the center of the village children took turns ringing the bell on Christmas Eve. She had watched her older brother and sister line up on past Christmas Eves to ring the bell. Children had to be tall enough to grab the rope. Finally she could reach it. This was her year!!!

She loved the Christmas Eve worship service. It was a time when church family gathered, she reconnected with those  she’d grown up with and she was welcomed by a fresh evergreen she helped decorate. Everyone with a candle, being lit from the Christ candle, each holding it aloft as together “Silent Night” was sang and then the older children rang the bell. The tolling of it, not only echoing off the nearby mountains but also her heart.

This year she would be at the front of the line, and the pastor had promised her that she would be first to ring the bell on Christmas Eve.

In the evening her dad came into her bedroom and shared that the rest of the family was heading down the street to church for Christmas Eve worship. They would pray for her. He left her some tea by her bed and said they’d be back in a while, as he closed her bedroom door.

Arnella could see her family going down the street as she looked out the window. Her brother was making a snowball to toss at her sister. She could see her church glowing with light in the night as people streamed into it.

As she lay in bed, she envisioned just where they must be in worship–the Bible reading from Luke’s gospel and the singing of the Christmas carols. As it neared the top of the hour, she became sullen, a tear traced her cheek. In her mind’s eye she could see the other children lining up to ring the bell and here she was, alone and in her sickbed.

She hadn’t bothered to turn on the light in her room but lay in the shadows waiting to hear the bell toll–a ring she had longed to make happen.

Suddenly there was a knock at her bedroom door and then it opened. It was her father! He was followed by her mother and then her sister and brother and…. There were more people lining the stairs. She recognized her Sunday School teacher, Thelma Jones and Gary who would pull her pigtail. And there was Pastor Kate too.

Everyone seemed to be beaming, like the candles they must have just lighted near the service’s end. They all chimed in. Pull the rope! Give it a tug!!!!

She pulled the rope, and then those in the human chain to her bedroom also pulled–her father, her family, Mrs. Jones, Gary, Pastor Kate…. The rope tightened, and after several seconds she heard the church bell ring!!!!!!

It was a startling and beautiful sound. She wondered how or who was ringing the bell. She gave the rope in her hand another tug; then after a moment the church bell, again, rang. Her father invited her to look out the window. There coming out the front door of her house, winding down the street and into the door of the church, were all those from her congregation. They were each holding a piece of the rope or really bunch of ropes tied together. She gave her rope another pull, and her father pulled with those in line doing the same. Watching out the window she could see the “tug” that she started move down the line; as people passed on her “pull” they would look up to her window and wave. The bell again rang out news of Jesus’ birth.  Her heart was full… Joy to the world the Lord is COME!!!

This year due to COVID-19 your congregation may be worshipping online or outdoors or having services that require a reservation due to social distancing. It is a different Christmas!!! And as one of my favorite Christmas stories here conveys, we are bound together by God’s love, and TOGETHER we ring in the news of God with us, Emmanuel!

Instead of finding more pieces of rope to tie together, how about calling another in your congregation or sending an old-fashioned or perhaps handmade Christmas card? Staying connected and keeping people tied in has never been more important.

Many in your congregation and family are experiencing the deep yearning of favorite traditions and are missing “live nativities,” Christmas pageants and cantatas. And you are creative, resourceful and can find ways to do something new or a different way—you’ve proven that you are in the past several months! Pull together and tie in those being impacted the most by this pandemic. Find ways to give people something to hold onto as we pull together.

My grandparents would share memories of their “best Christmases,” when they would get a simple tin cup and an orange.  My Dad’s mom remembered the Christmas her brother didn’t come home because he died from pneumonia and measles or swine flu in basic training early in World War I. And that Christmas my grandmother, her parents and brother and sisters were in their little country church, where news of God’s gift in Jesus Christ rang out and became real for them in heart wrenching new ways. This is not all there is; heaven is real, and LOVE came down for Christmas. This Advent and Christmas, may we be tied together by our faith and the knowledge that “Heaven came down and glory fills our soul!”