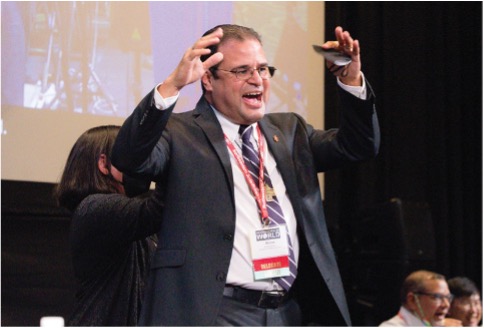 Burgos was the first bishop elected at the Nov. 2-4 meeting after Delegates elected Burgos on the third ballot. He received 94 votes outof 150 valid ballots cast. He needed 90 to be elected.

Standing at the podium with his wife, Jazelis, Burgos thanked her for being his support and strength during his time in ministry and during this episcopal journey.

“Friends, some of you heard me say that I’m coming to this with my eyes wide open,” he said. “Open your eyes … look for the blessings and opportunities God has for us. Friends, the world needs us … all of us. Let’s go and reform the world, In Christ’s name.”

His two-year term of service begins Jan. 1. In the United States, bishops are elected to serve for life.

Burgos was the endorsed candidate of MARCHA, the Hispanic/Latino Caucus of The United Methodist Church.

“At this pivotal time in the history of our denomination,” he said in an email interview prior to his election.“I am called by God to offer myself to lead in the office of bishop in the footsteps of the prophet Nehemiah, whom God called to lead the people to rebuild and renew the community during challenging and uncertain times. I humbly can say that I am a leader with strong faith; with a pastoral heart that values, affirms, andcares for all people – especially the most vulnerable.”

Burgos has served as Superintendent of the Central District in the Greater New Jersey Annual Conference since 2019. Prior to that, he served as their Director of Connectional Ministries from 2015 to 2019.

He also has served as Interim Executive Director, Next Generation Ministries, in the Greater New Jersey Annual Conference; Director of Worship and Urban Ministries in Greater New Jersey; lead pastor at Oasis UMC in Pleasantville, New Jersey, from 2009 to 2014, and as Associate Pastor, First UMC in Tuckerton and Assistant Pastor at West Creek UMC.

In The United Methodist Church, bishops are ordained elders who are called to “lead and oversee the spiritual and temporal affairs of The United Methodist Church.” Bishops, in consultation with district superintendents, are responsible for appointing clergy. They also preside at annual conferences, jurisdictional conferences and General Conference, the denomination’s top law-making assembly.

He and other new bishops are coming aboard as the denomination deals with the continuing fallout of the COVID-19 pandemic and rising congregational disaffiliations amid a denominational splintering.