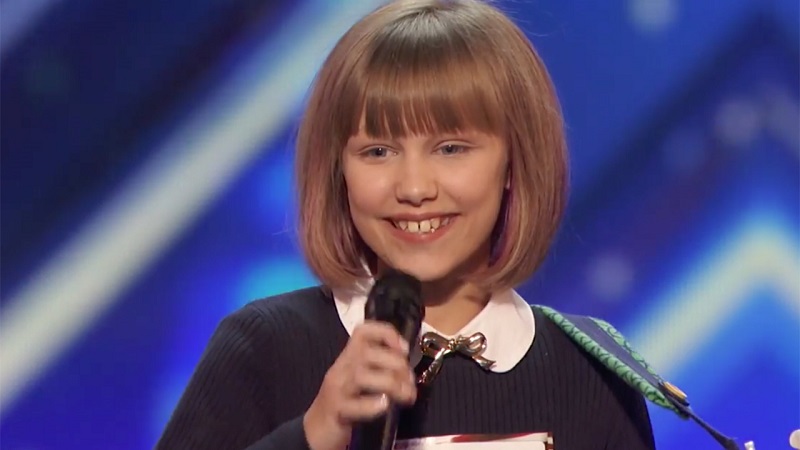 Grace VanderWaal from Archer UMC stuns the nation with her magnificent performance on America's Got Talent. Photo provided.

Grace VanderWaal. Let that name sink in. Write it down. Save this article. The 12-year-old musical prodigy from Archer UMC in Allendale wowed the nation last spring on the debut of NBC’s America’s Got Talent. Along with her ukulele, VanderWaal confidently and spectacularly performed an original song she wrote titled “I Don’t Know My Name.” From that moment on, her name went viral, the video clip of her jaw-dropping performance garnering more than 60 million views.

The judges gasped in astonishment as VanderWaal received a standing ovation followed by judge Howie Mandel calling her a “miracle” and hitting his “golden buzzer” sending the newfound artist straight to the live show. Confetti rained down onto the stage as her family swarmed the awestruck young artist. From Reese Witherspoon to Justin Bieber, fans and celebrities took to social media to share their admiration for the young singer-songwriter. Even former American Idol judge Simon Cowell gushed over VanderWaal’s performance, calling her “the next Taylor Swift.” That from the man who discovered One Direction.

Coming from a family with a deep love and appreciation for music, VanderWaal has been singing since the age of three.

“Instead of telling stories, she would sing them,” said her mother, Tina. “She’s very theatrical and has always loved to entertain.”

Last year, VanderWaal used her birthday money to buy a ukulele. Two weeks later she learned a song and performed for her parents.

“We were stunned,” exclaimed her mother. Since then, the ukulele has helped VanderWaal find a voice, compose music, and put a song to paper. Last summer, VanderWaal’s mother brought her daughter to an America’s Got Talent audition at Queens College in New York.

“I thought it would be a fun learning experience for Grace,” she said. “We weren’t necessarily counting on making it through.”

Several months later, VanderWaal received news that she had been selected to audition in Los Angeles on national television in front of celebrity judges.

“We went into it so half-heartedly, just for the experience,” said Mrs. VanderWaal when speaking about the audition at Queens College. “We were just so amazed when we heard the news!”

Before her television debut, VanderWaal frequented the open mic nights at The Bean Runner Café in Peekskill, NY. Her first performance floored the tiny, close-knit community audience and became her support system, encouraging her with each new show at the café. Every month VanderWaal returned to the quaint, small-town coffee shop with two songs. From poetry slams, acting, music, and singing, The Bean Runner crowd exposed VanderWaal to a wide-ranging of diversity and talent while solidifying her confidence.

“The open mic nights prepared Grace for what she was able to do on television,” her mother said. From a tiny café to a sold-out theater audience with cameras broadcasting to millions across the world, VanderWaal kept her cool, performing her best in front of strangers as opposed to an audience of friends or family.

As a member of the Archer UMC youth choir, VanderWaal also sings solos during the summer services. Having known Grace her whole life, the congregation wasn’t surprised that her musical talent was met with such warm reception on the national stage.

“Our church is just such an amazing spot,” said Mrs. VanderWaal. “They have been so supportive of her, and it’s really an inspiring community to be a part of.”

From her family to the congregation at Archer UMC, Greater New Jersey and the nation watch with anticipation and excitement as VanderWaal’s story continues to be sung.