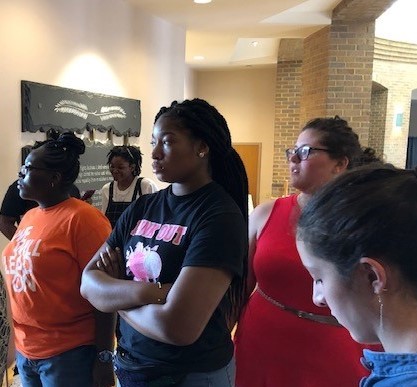 The Joshua Generation, a program sponsored by Next Gen and funded by the General Commission on Race and Religion, has been led by Rev. Brenda Ehlers, Associate Pastor for Children, Youth and Educational Ministries at Morrow Church in Maplewood. The group of 14 New Jersey high school students began meeting in 2018 to study social justice and learn about civil rights leaders who have shaped our history.

“We’re all about racial justice. There is no shortage of hard work that still needs to be done,” said Ehlers who has been supporting her church and community toward a stronger sense of stewardship and justice ministries for the past 16 years.

The year-long program began with a list of books including “Between the World and Me” by Ta-Nehisi Coates and “The Fire This Time: A New Generation Speaks about Race” by Jesmyn Ward and monthly Zoom calls to discuss each one.

Following a training session in May, five chaperones led the high school students in late June on a pilgrimage down south to retrace steps taken by some of their heroes and other lesser-known activists while learning about their faith and their place in this world.

“Everyone should have some type of exposure to this,” said Kerwin Webb, who is a recent graduate of Princeton’s M.Div. program and the Youth Program Coordinator for Next Generation Ministries. “If you don’t know your history, you can easily repeat it. We’re hoping to be voices for those who can’t speak.”

The pilgrimage started in Atlanta where the group visited the childhood home of Martin Luther King Jr and the Ebenezer Baptist Church where Dr. King and his father were associate pastor and pastor, respectively, and where his sister, Christine King Farris is still a member.

Also that weekend the group visited the National Center for Civil & Human Rights where they experienced an interactive simulation of the historic Woolworth’s lunch counter from North Carolina where African Americans defied the racism they faced by organizing peaceful sit-ins.

“It was hard to bear, but I was committed to getting through it until the end,” said Webb, a Birmingham, AL, native who explained that the simulated lunch counter recreated things like kicking and yelling to allow participants to feel a fraction of what African Americans felt in the 1960s.

The next stop was Birmingham where the group visited Kelly Ingram Park and the 16th Street Baptist Church, a place that served as a central staging ground for many demonstrations in the 1960s and where high school students held hands to protect each other from attack dogs and fire hoses as ordered by former Commissioner of Public Safety Bull Connor.

The pilgrimage continued onto Jackson, MS. There they met with the chief of staff in the mayor’s office and then visited the barn where the iconic 14-year-old Emmitt Till was lynched before traveling to the home of the civil rights activist Medgar Evers.

The killing of Till and the ensuing lies reflected how insidious the problem was, said Ehlers.

“It changed the trajectory of the Civil Rights Movement…It also showed how complicated the silence of evil can be.”

The remainder of the trip included a stop at the Fannie Lou Hamers Memorial Garden in Ruleville, Cleveland where segregated high schools still existed until 2017 because of divisive practices administrators used, and then the Southern Poverty Law Center in Montgomery. Also in the city where Dr. King finished his famous nonviolent walk from Selma that day, the group visited the lynching memorial designed by the Equal Justice Initiative that draws attention to the more than four thousand African Americans lynched from 1877 to 1950.

As the students tried to digest everything they saw and heard, the chaperones led a discussion every night so that they all could share their hearts and listen to the hearts of other students. They spoke about how each experience impacted them, sometimes shedding a tear. They also kept journals along the way to preserve their most personal thoughts.
Ehlers remarked how after every person they interviewed along their journey, how hopeful they were in spite of the adversity or abject racism they faced.

“Everyone saw hope in the conversations that ensued from the violence, racial slurs or discrimination.”

Following the end of the journey, each student was encouraged to reflect on the experience and work on securing mini-grants to support their respective communities.