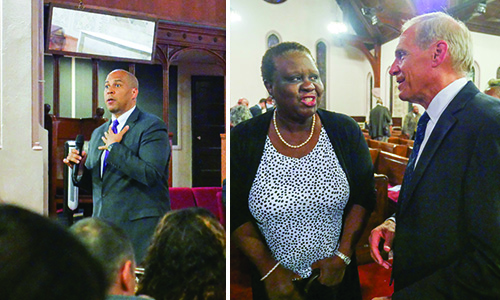 Click here to the opening statement by Bishop Schol

Participation in the forum, which focused on race, religion and criminal justice, reinforces the commitment Greater New Jersey United Methodists made to equal justice under the law, racial justice, institutional racism and white privilege in resolutions passed at the 2015 Annual Conference.

“The criminal justice system more often emphasizes punishment over rehabilitation and applies the law unevenly while our faith traditions and moral sensibilities call for restorative justice and applying laws equally and fairly,” Schol said. “This is an issue that is important for all of us and it affects our communities in countless ways.”

The speakers in the forum shared statistics on the criminal justice system in the United States to demonstrate the need for action:

Booker gave the keynote address, explaining to the captive audience why criminal justice reform is such an important issue. “We have five percent of the population in the world, but we have one quarter of the world’s prison population,” Booker said. “We are the incarceration nation. We are spending $4 trillion per year dealing with this problem.”

Booker pointed out that when examining the problem within the African American community, the numbers are even more stunning.
“The system is profoundly against poor people and people of color,” Booker said. “A person of color is 3.7 times more likely to be arrested than a person who is white.”

After Booker’s address he joined a five person forum that answered questions submitted by the audience. Others on the panel were Paul Fishman, U.S. Attorney for the State of New Jersey; Jiles Ship, a New Jersey native who is president of the National Organization of Black Law Enforcement; Rev. Charles Boyer, pastor of Bethel African American Methodist Episcopal Church in Woodbury, N.J.; and Rev. Craig Hirshberg, of the Unitarian Universalist Ministry of N.J.

The panel was in agreement that the problem encompasses the entire process, from who we choose to arrest and prosecute to how we treat people in prison to the societal issues that occur once a prisoner is released. They referenced the book, “The New Jim Crow” by Michelle Alexander, which points out disparities in the justice system and how it affects people of color. GNJ leadership, including the extended cabinet is currently reading and discussing the book.

“People have to see that we have a system that is a big reason for our problems,” said Vanessa Wilson, the Greater New Jersey Chairperson for the Commission on Religion and Race, who attended Tuesday’s event. “I’m glad we are staying on this issue because the first thing you have to do is get educated.”

Prison ministry has been a part of Methodisim from the beginning. Many GNJ churches continue to be involved in prison ministry, but the larger issues of criminal justice reform is a problem facing all churches. “We, as a church, need to address these problems and educate the people in our churches,” said Greater New Jersey Lay Leader Rosa Williams, who was also in attendance Tuesday. “It’s the whole church’s problem, too.”

While Booker says it can be challenging to change laws in Washington, he says continually pushing for change in criminal justice reform will remain a major priority for him. He also joined other panelists in offering suggestions for people to act. Read the book “The New Jim Crow” to get educated on the issues, use social media to share your concerns and get others involved, volunteer with mentor programs for at risk youth, create support programs for people leaving the prison system and support community policing. “I am a prisoner of hope,” said Booker, the former mayor of Newark. “I believe that we will see change, and to me, it’s just a matter of how far that change will go.”