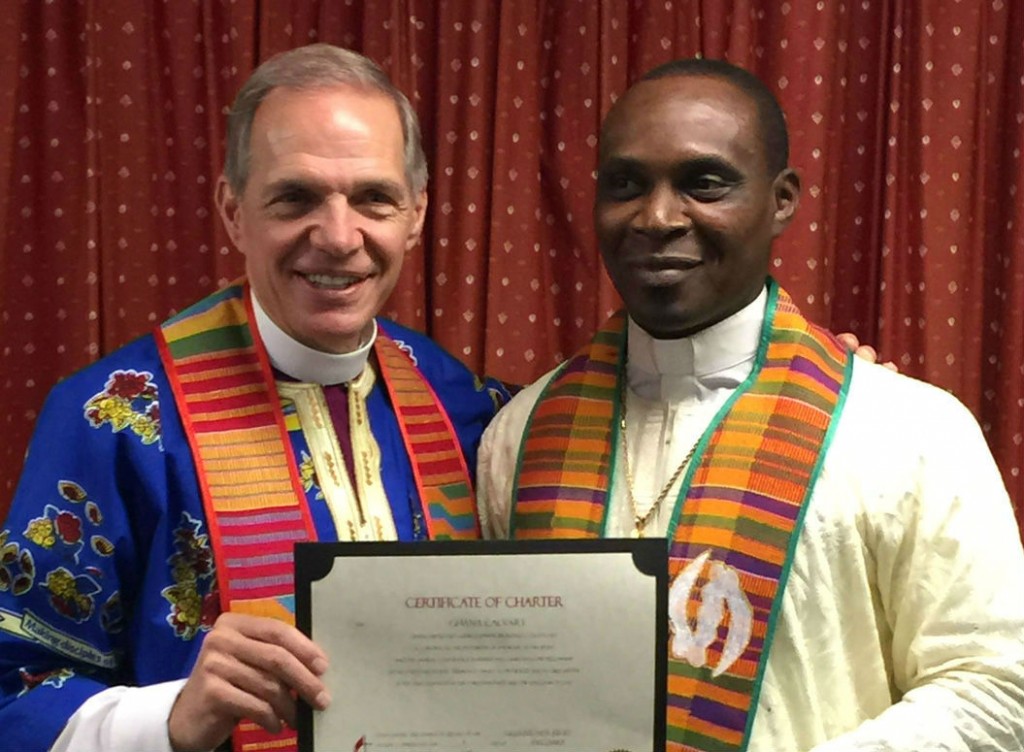 In June of 2006, a small group of Ghanian immigrants in New Jersey began studying scripture, worshipping at different houses every week, Bibles in hand. No fewer than 20 people attended on a weekly basis, and as they grew, they began searching for a place to hold worship services.

On Oct. 1, 2006, the congregation celebrated its first Sunday service in the borrowed basement of a church with 78 people, including children, attending.

Now, nearly 10 years later and 250 members strong, Ghana Calvary United Methodist Church has received its official charter into the United Methodist denomination. On Dec. 6, 2015, the congregation celebrated its journey toward full membership in the UMC by worshiping together and sharing lunch with Gateway North District Superintendent Manuel Sardinas and Bishop John Schol. It was, in many ways, a final recognition of homecoming for the community.

From the beginning, there was a shared desire to move toward membership in the United Methodist Church, in large part because of the lack of well-organized churches in the Ghanian community. According to founding pastor Rev. Nathan Addo-Nartey, many Ghanian Methodists found themselves attending different churches, such as charismatic or Pentecostal communities, once they settled in the United States.

“Since becoming a United Methodist church,” Addo-Nartey said, “some of those members are coming back and realizing that there is now a well-structured community for them.”

Located in Irvington, N.J., Ghana Calvary has a vibrant and active youth community and a strong mission-oriented ministry. Every summer young adults from the congregation serve in a local food pantry. They have also raised funds to support education efforts in Ghana, sending between 70-100 school bags packed with much-needed books and supplies for young learners.

Through The Guild, another church ministry, the congregation raises funds to support mission work abroad. Last year it coordinated a fundraiser through UMCOR (United Methodist Committee on Relief) for a water project in Ghana, and it has already purchased a water tank for Osu Children’s Home, an orphanage in Accra, Ghana.

Worship services on Sunday mornings are held primarily in English (with about 25 percent of the services being conducted in various Ghanian languages). Services integrate traditional Ghanian ways of worship with contemporary elements.

“We want to raise our children to continue in the same faith and culture,” Addo-Nartey said. “We don’t want them to lose their identity as Christians, as members of the United Methodist Church, as American citizens and as Ghanians.”

The main mission of the church, Addo-Nartey says, is to reach out to the local Ghanian community through the United Methodist tradition. Because of the church’s strong roots in the Ghanian immigrant community, one of its central ministries is serving and supporting immigrants, especially those without legal documentation.

When two church members were detained, for instance, Ghana Calvary took up a special offering to loan them money for bonds, then supported them through the process of attaining green cards. When other Ghanian members received letters of deportation, the pastor intervened with letters of support, helping them to remain in the United States.

Now, Ghana Calvary is trying to extend the support of its faith community to all immigrant communities which may be facing similar situations. It hopes to partner with immigration lawyers as well as other churches that are committed to supporting immigrants and detainees.

“There are a lot of people who come, who can help do ministry, but because of lack of proper documentation they cannot be officially involved in ministry,” Addo-Nartey said. “My number one passion is to help those who are struggling with immigration status. By the grace of God we’ve been able to support them.”