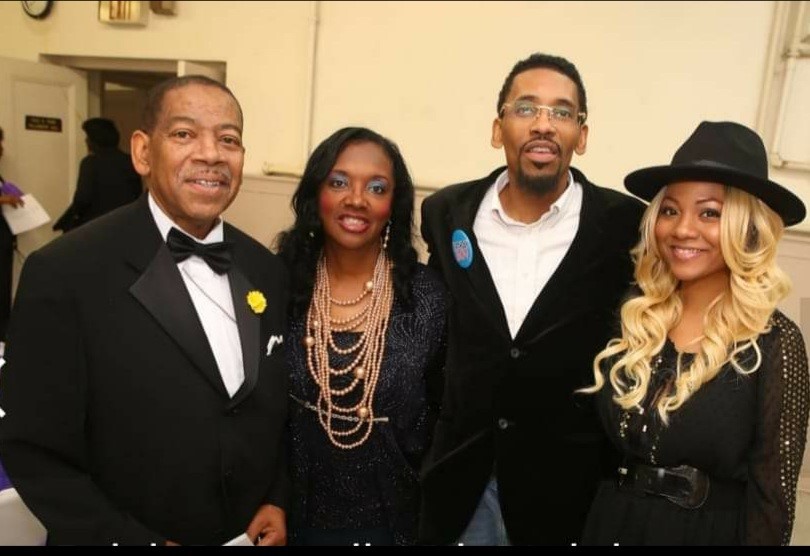 We continue our series on GNJ Clergy Families with a profile on the Terrell Family of Newark, NJ.

“With courage, born of success achieved in the past, with a keen sense of the responsibility which we shall continue to assume, we look forward to a future large with promise and hope.”—Mary Church Terrell (1863-1954)*

The city of Newark was named in the 1600s after the New Ark of the Covenant, that gold wooden chest described in the Book of Exodus that holds the two stone tablets of the Ten Commandments. Following many transformations over the years, Newark is the most populous city in New Jersey with nearly 300,000 residents and second only to Jersey City in diversity.

But in the past several months the pandemic has strangled the city with death and food insecurity. At one point, Newark became the number one city in New Jersey with COVID-19 cases. But the city rich in history and cultural diversity is shouldering the burden with strength and courage as many leaders of the city open their hearts and minds to the radical change facing it.

Rev. Dr. Lloyd Terrell is one of those bright leaders. He looks at every day as a good day, one full of opportunity. As the pastor for the historic Franklin-St. John’s UMC in Newark for the second time in his nearly 40-year career, he embraces the challenges he faces but appreciates the hope that each day brings.

When asked where his optimistic attitude is derived from, Dr. Terrell said, “I was born Black.” He fondly recalled his days as a child growing up in Akron, OH, surrounded by a group of pastors who inspired him and imparted in him the passion he has for ministry still today. “Those memories keep me motivated to serve God.”

This dedication and sincere heart clearly rubbed off on the four children he and his wife, Margarite, had, including his son, Rev. Dr. Ralph Terrell, who now leads both St. Matthews and Trinity UMCs, two churches also in Newark with distinctly different congregations. He said, “ The church is so much a part of my life. I’m having the time of my life at churches in the city I grew up in.”

Now the father of five with his wife, Radeyah, who he turns to often for inspiration and guidance, Ralph looks back on his childhood with gratitude, grateful for the wonderful experiences as well as the lessons learned.

“My father and mother always told me, ‘remember that you’re Terrell’” as he recalled the biggest piece of advice his father gave him and his siblings. “He told us that before you do something, ask yourself these three questions: does it shame God; does it shame your parents; and does it shame me. I still follow this advice today.”

After moving from Akron to serve in a church in Iowa and then back to Newark to continue his education at Drew University, Lloyd served the church on Maple Avenue from 1984 to 2001 before becoming a district superintendent for the Gateway North District for five years. During this time, he grew the church to about 500 people and added one of the first church credit unions. He encouraged congregants to embrace the church’s rich history, part of which included the merger of two churches, one predominantly White and the other predominantly Black.

“It was never fully integrated. They needed to know their history,” said Lloyd.

He noted also that although the more famous W.E.B. DuBois may have been the first Black to receive a Ph.D. from Harvard, John Wesley Edward Bowen, or J.W.E. for short, was the first Black in the United States to earn a Ph.D. in theology in 1887. The son of a slave, Bowen was the pastor of St. John’s Methodist Episcopal Church in the late-1880s. (see Note below).

With deep pride for those whose footsteps he follows, Lloyd also told his congregation about the courageous church member, Mary Colson Woody, who was the first woman funeral director licensed by the State of New Jersey in Orange, NJ.

“St. John’s didn’t know their history, and they needed this to move forward,” said Lloyd, who also noted that many of the doctors at Beth Israel Hospital when it first opened in 1889 were also members as was Emily Miles, known as the “the grand dame of black style in Newark.”

With that history to carry him, Lloyd leads his congregation toward outstanding outward ministry. Every Wednesday they distribute food from their pantry to about 100-200 people, most of whom are the working poor who are struggling to put food on their tables.

“I’m grateful we can be there to help these people,” Lloyd said, adding that every family receives about $75-125 worth of emergency food.

On the other side of town, Ralph is also doing ministries through his two churches by identifying needs in the community and then meeting them with their hard work and blessings.

“We have a sincere heart for the community,” said Ralph. “People want to be part of a church that is making a difference.” Ralph added that in 2020 they provided more than 375 boxes of fresh fruits and vegetables and fed an entire meal to more than 50 families in the community. Their ministries also included raising $3,000 so that they were able to hand out laptops to children in their congregation. Other donations have included book bags, school supplies and grocery store gift cards.

In August, Ralph and his congregations stretched their missional limits all the way to Houston where Rev. Dr. Rudy Rasmus, who is also the editor of I’m Black. I’m Christian. I’m Methodist (see page 9), organized a fundraiser with singer Beyonce who once sang in his church’s choir. Sales of her album enabled the congregations in Newark to provide diapers to single mothers in Newark.

Like his father, Ralph is both pastoral and vigilant, always searching for creative ways to help others with his own conviction and voice. This circuitous route has been part of his life since childhood as his curiosity and his “mischievous and gregarious” ways, as described by his father, led him down different paths along the way.

As a child, Ralph recalled, his father’s church thrived. “Our church could rival anything the community was doing. I held every position there was. You name it, I did it.”

At home, he and his siblings, Lloyd, Alice and Zelma, would play “church,” with Ralph often playing the role of preacher.

“He would play the preacher with fire and brimstone, like telling them to clean their rooms,” Lloyd recalled with a laugh. “I didn’t want them to hear my voice, but rather the voice of God…He was just trying to find his way.”

“Although I had a calling all my life, my calling was more of a gradual one,” said Ralph who later went on to receive a M.Div. from Drew University and a D.Min. from the Graduate Theological Foundation in Mishawaka, IN.

“I was rebelling and trying to find my way. In the end, I had to meet God for myself. It was in those years in Augusta that I had my come to Jesus moment. I came home as an alcoholic.”

He added, “I called my dad ‘the fixer,’ but he couldn’t fix this one. Only one who could was God,” said Ralph who now as a recovered alcoholic helps those in his congregations and communities who have been plagued with addictions by sharing his story. “It resonates with many, and there’s a level of accountability for me that I need. And I have my own voice,” something his parents always wanted for their “live wire” who managed to bring laughter to delicate situations.

Known affectionately as “Daddy Terrell” by his five grandchildren ranging in age from four to 17, Kyla, Yohan, Ralph Jr., Preston and Ronald, Lloyd seems to treasure his memories and relish those moments when he can be with his family while he serves God.

Although his heart is heavy recently from doing so many funerals and mourning the loss of former Trinity UMC pastor, Rev. Sherrie Dobbs Johnson, Ralph is still hopeful for the future and sees Newark as a city poised to accept some radical change. And like rapper Jay-Z, who Ralph also names as one of his influences in ministry because of his courage and amazing endurance in the face of adversity, “Life is for living.”

Full of vitality, both Lloyd and Ralph seem to be in the best place where they can transform lives, in the city that has been called Gateway City and Renaissance Newark as they look toward “a future large with promise and hope.”

Note: In 1893 John Wesley Edward Bowen began teaching historical theology at Gammon Theological Seminary, soon becoming Gammon’s first full-time African American professor. As secretary of the Stewart Missionary Foundation for Africa at Gammon, he edited the Stewart Missionary Magazine. Bowen envisioned a new and liberated “Negro” to build a new nation. As part of that vision, he launched and edited The Voice of the Negro in 1904 with Jesse Max Barber. Bowen served as president of Gammon from 1906 to 1910. He witnessed a race riot his first year as president, during which he offered the seminary as shelter for blacks and was, himself, beaten and arrested. He became head of the Church History department, retired in 1926, and continued to teach until a year before his death in 1933.

*Although Ralph and Lloyd are not related to Mary Church Terrell, one of the first African American women to earn a college degree who was a national activist for civil rights and suffrage, Ralph is the nephew of Judge Mary Gooden Terrell of Washington, D.C.