Easter is about tragedy triumphed by a miracle and that’s what Elim United Methodist Church and the Manantial de Vida Pentecostal congregation celebrated last Sunday. The two congregations came together with the community to hold a combined worship service in the church parking lot to give thanks for their own Easter miracle. On Easter Sunday, a few hours after the Elim congregation finished its Easter service and just as the Manantial de Vida Pentecostal service was starting, the ceiling of the church collapsed. 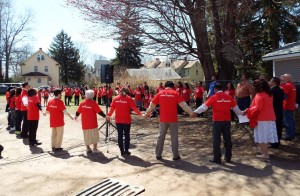 While 14 people were taken to the hospital after the ceiling collapse, all were treated and released by Easter Sunday night. So there was reason to celebrate the following Sunday. “The mayor, police chief and fire chief, all agreed it was a miracle and that God really protected the congregation,” said Elim UMC pastor Rev. Leo Park. “I saw what happened. I wonder myself, how did all of those people come out of it?”
The two congregations came together for a joint community service in the parking lot. “The idea was from our congregation and there were two main things that we wanted to do,” said Park. “First, we wanted to thank God for what He has done for us on Easter Sunday. Many people asked why this happened. We don’t know why. But we do know what God has done for us and we thank God for His protection.“The second reason was to comfort the members of the Hispanic congregation. We are the owner of the building and we are brothers and sisters in Christ. We felt the call to comfort them.”
Park said most of the service was done in Spanish, with small parts being done in English and in Korean. Rahway Mayor Samson Steinman also spoke to the 300 people in attendance. “He gave a powerful speech,” Park said. “He acknowledged that God truly protected the congregation. It was a powerful service.“ Park believes God’s power was a part of the entire process, which included one woman who appeared to be seriously injured at first, but was released from the hospital Sunday night. Park and Gateway North District Superintendent Manny Sardinas made hospital visits to those who were injured. “It was miracle after miracle,” Park said. “We had more than 75 people that came out of that disaster without anyone being seriously injured. As I was walking out of the emergency room after the last person was released, I just lifted up both hands to praise God.”
Other United Methodists in the conference came out in full support of the two congregations both by joining in the service and by offering hospitality. Woodbridge UMC will host the Elim congregation and Trinity UMC in Rahway will host the Manatial de Vida congregation until decisions are made about the building. Park believes miracles for the approximately 150-year-old Elim church are not finished.
“We hope to repair it,” Park said. “I believe another resurrection will happen in that building.” Park said the building, which is insured, has been undergoing inspections to make sure the rest of it is safe so that it can be declared a safe zone. Once that happens, he said, volunteers will clear out the fallen ceiling, a 30-foot square piece that was made of plaster, tin and wood. “When we do cleanup we will need help,” he said. “Right now, there is no time estimate for when we can start getting it fixed.”

And there is no estimate of how many more miracles just might happen at Elim UMC.