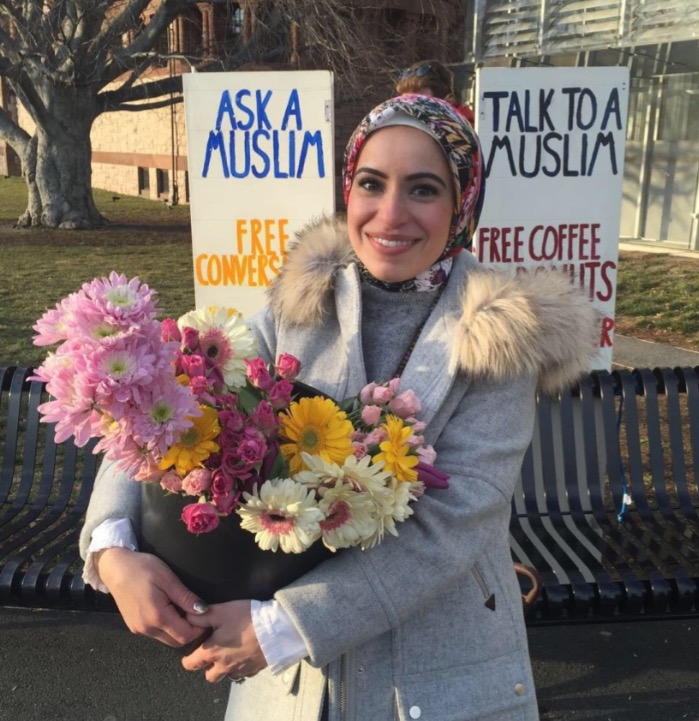 Mona Haydar, a Muslim poet, activist, practioner of Permaculture, and mediator spoke at the UMC at Demarest’s fall forum on Oct. 16 under the banner of “Love Always.” Photo provided

Mona Haydar and Sebastian Robins put signs on their car, stocked up on donuts and coffee and invited neighbors in their Cambridge, MA community to “Ask a Muslim.”

Haydar explains that they wanted to replace the existing social narrative that connects Islam with terrorism. “I’m just like you,” she says. “People want to equate terror with Islam. It is a fictional creation of our imagination. Terrorists comprise .004% of a faith made up of 2 billion people. The fact that Sebastian and I are out there helps change the narrative and humanizes Muslims.”

Noting the extensive news coverage they received, Haydar, who is a performance poet and activist, laughs saying, “When giving away donuts and coffee makes the news, surely it is a sign that we need more love in the world.”

Rev. Myung Sun Han of the UMC at Demarest invited Haydar to speak at the church’s fall forum on October 16. “Every fall, we invite one or two speakers who share about relevant social issues in prophetic ways,” he explains. “When I learned that Mona was a Master of Divinity Student at Union Theological Seminary in New York City, it was a great opportunity for our community to engage in interfaith dialogue with her.”

Am I Affirming Life?

Weaving together stories of faith, poetic expression, womanist theology and experiences of being a Muslim American, Haydar’s easy-going and open demeanor created space for respectful and enlightening conversation.

Haydar explained to the group who gathered at the UMC at Demarest that the “Ask a Muslim” initiative was a way for her family to present themselves, not as an authority of Islam, but “what it looks like to me as a practitioner. How I engage in the world in my everyday life.”

She says, “I am a Muslim by way of Abraham. By way of Jesus. By way of Mary, Moses, and Noah – people who brought the same message I am trying to bring.”

She shared that beyond the more overt rituals such as praying five times a day, “glorifying God and asking for God’s help,” her faith directs her to smile at every stranger because “A smile is charity.”

At the core of who she is as a Muslim, is the question, “am I affirming life? Am I creating lasting relationships?” she asks in every aspect of her life. “A Muslim is one who submits to that call to be in relationship with other humans to know God.”

When asked about the significance of wearing hijab, Haydar explains that it is a spiritual discipline. “It is a reminder that I am so much more than this physical body. I’m not a piece of meat who can be consumed by those in the world.”

Noting that all Semitic traditions cover their heads, she continued, “When you sit in prayer, that channel is open. When you are in the world, you need to keep your energy sanctified.”

She shared that she was recently with her young son and two men began talking violently about her, threatening to rip the scarf from her head.

Haydar is concerned stories about violence against Muslims will become normalized. The best thing allies can do is stand with the person being harassed, she suggests. As a Muslim born in the U.S. with Syrian heritage, she says, “Christianity is embedded in U.S. culture and history. We need to heal some of the serious theological God problems we have in order to heal the world.”

She continues, “This is a Uni-verse . . . God’s poem written to us. It is structured so we can know each other to know God. We were made in the image of the creator.”

About Forums at the UMC at Demarest

Several years ago, the UMC at Demarest began holding forums in the fall and during Lent. Inviting speakers from the community, GNJ, and theological school faculty, guest speakers enhance the congregations’ understanding of a range of topics.

Rev. Han says that the fall forum series is focusing on “prophetic” topics including the interfaith conversation with Mona Haydar.  The series opened on October 9. Rev. Dr. Vanessa Wilson, chair of the GNJ Commission on Religion and Race spoke with participants about Cultural Competency. Rev. Han is considering a “pastoral” Lent forum that will focus on grief and healing.

In his closing prayer on October 16, Rev. Han prayed, “Teach us and lead us so that we see each other not as an objective or tool. Help us see each other as fellow human beings created in Your image.”