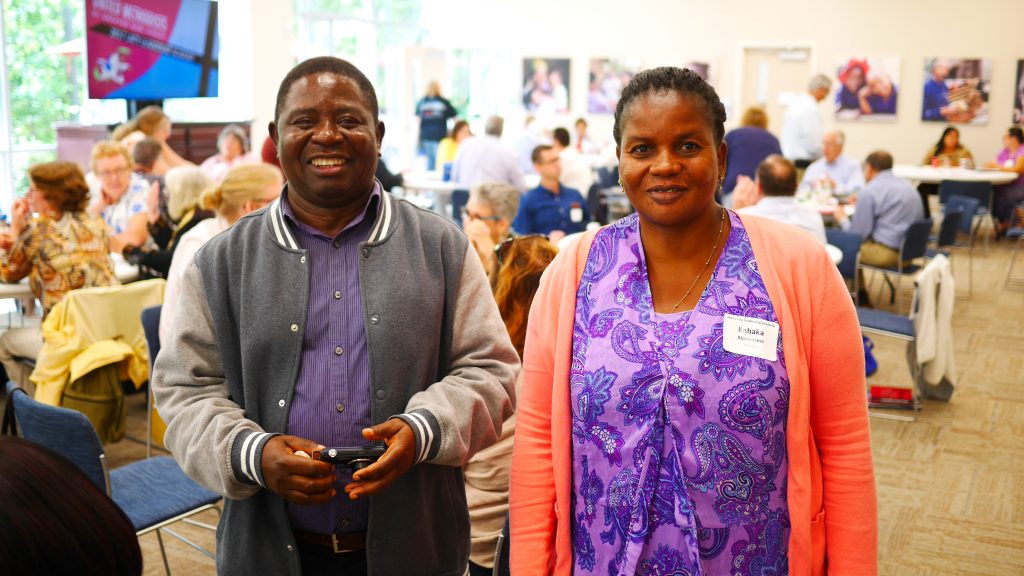 RED BANK – Rev. Mutwale Ntambo Wa Mushidi was called to church plant.  With his wife Kabaka Ndala Alphonsine and four children, he left his home in the Congo by boat and arrived in Tanzania with nothing but the call to ministry.  They didn’t know anyone, didn’t speak the language, and didn’t even have the bare necessities.  Now, 25 years later, there are 68 new United Methodist worshipping communities in Tanzania.

“We left our home in DRC (the Democratic Republic of the Congo) and were told by the bishop, ‘you go start the UMC in Tanzania.’ We left by boat and crossed the deepest lake in Africa,” Mushidi told a group who had gathered at Red Bank UMC.

Janie Schildge, a member of the church, helped organize the event while the missionaries were visiting the U.S. It was the third time they visited the church in the past five years. “We are here to refresh our relationship and to thank you,” Mushidi told them.

Recalling their first days in Tanzania, Mushidi shared that he went out and met his neighbors, who brought the family food and drinking water. He explained to them that he was there to start a United Methodist Church.

He and Alphonsine started a house church with six Tanzanians the first week. “By the second week, we had twenty congregants. Each week we grew as refugees, women, and children, including those who have been orphaned, started attending. And then we started new small churches in the surrounding area.” In the past 25 years, in partnership with six other missionaries, dozens of churches were started around the country with ordained pastors.

Alphonsine, who said, “I always wanted to help children,” taught Sunday school. When she realized that many of the younger children did not have enough money for education, she began a pre-school program that prepares Christian and Muslim children for primary school.

She also teaches women to make handbags and other livelihood projects. They dye batik and sew dresses. “If they don’t have machines, we show them how to farm together and sell some of the food,” she said.

A new ministry in partnership with the denomination’s General Board of Global Ministries is the Tanzania Health Board. After being accepted by the local government, the health board will address public health, teaching women about family planning and how to protect their families from malaria and HIV/AIDS.

With the help of GNJ United Methodist Churches such as Red Bank and Vincent in Nutley, a 15-acre banana plantation was purchased for the conference center. Mushidi and Alphonsine plan to build a new conference center, clinic, and guest house, among other projects. They need to raise $200,000 for a guesthouse that will be a resource for people visiting the area. The income generated will support the projects. “Please come stay with us,” Mushidi invites United Methodists. “You can stay in the guesthouse and volunteer in ministry with local pastors, children, refugees.”

Rev. David LeDuc, the pastor at Vincent first met Alphonsine and Mushidi in 2012. Because GNJ and the North Katanga Conference are sister conferences, supporting Congolese missionaries serving in Tanzania was a natural connection. “We were inspired by their amazing faith and their dedicated mission work,” he said.

Following a mission trip to Tanzania in 2013, LeDuc said, “We dedicated ourselves to helping them raise funds for the Annual Conference Center.”

Churches and individuals who are interested in supporting these missionaries and their ministries can make a gift through the General Board of Global Missions Advance at www.umcmission.org/give