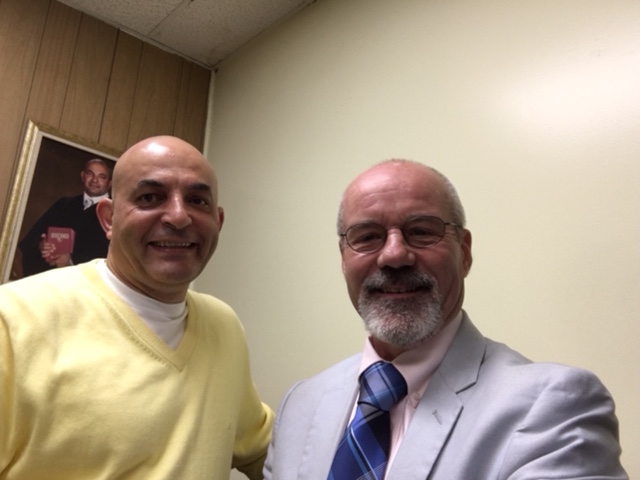 BAYONNE – Rivers of Life was started in 2003 as part of the ministry of the Wesley UMC in Bayonne. Emad Gerges left a successful career as a mechanical engineer in Cairo, Egypt, to respond to a call to ministry that led him to Bayonne. He had started preaching in Egypt even while continuing in secular jobs. Though he had grown up in the Coptic Orthodox Church native to Egypt, as a young adult, he said that he was not at peace and began searching for alternatives. He found a church in Cairo that traced its heritage to British Methodism and he began attending. Soon he became a sought-after preacher. As a lay preacher, he began preaching not only in Egypt, but in Iraq, Libya, Lebanon, Syria, England, and the Sudan. Once he preached before 3,000 people at a revival in Khartoum. Amid the preaching and successful business career, he received a clear call from God to leave his secular work and dedicate his life to full-time ministry. He received invitations from Arabic-speaking Christians in the United States to come.

One of those invitations came from a group of four Arabic-speaking Christians in Bayonne. This group had been renting space at the Wesley UMC. After he visited them they invited him to stay.

“How can I do this?” he prayed to God. “How can I go from preaching to thousands of people to pastoring a group of four?”

After two weeks of prayer, he sensed from God a clear message: “Don’t look at how many people you are preaching to. I need you here.”

Emad spoke no English at the time, however, his wife, Marianne, spoke English fluently. With her help and translation, he met with the pastor of Wesley UMC, Rev. Gary Frieze, and found this church similar in many ways to the Wesleyan church he had joined in Cairo. He and Marianne joined Wesley UMC as members. He met with the District Superintendent, the Reverend Dr. Lloyd Terrell, and soon was giving leadership to the Wesley Arabic-speaking group.

“I would look through the phone book and identify the Christian last names from an Arabic-speaking background and I would send them Christian messages,” he said. “Eventually, I invited people to attend a gathering at Wesley UMC.”

His District Superintendent arranged that he attend licensing school. Afterwards, he enrolled in the Course of Study at Wesley Theological Seminary so that he could be certified as a local pastor.

“The Course of Study program and ESL classes helped me learn English. I was still not fluent, however, when the District Superintendent asked me to serve both the English and Arabic speaking congregations.”

The Superintendent insisted he serve both congregations, even though the English congregants resisted the idea of him becoming their pastor. “Start with translation,” suggested Dr. Terrell, “and once you become more comfortable with the language, begin to preach in English.”

14 years after it started, “Rivers of Life” has grown to an average worship attendance of 200. The English-speaking congregation still gathers for worship every Sunday at 10 a.m. They are a much smaller group, sometimes worshipping about 15 people, but nevertheless faithful members of the church. Pastor Gerges’ family joins him in this ministry. His wife, Marianne, directs the Sunday School program and Youth Mission. Their son, David, now fifteen years old, serves on the praise and worship team playing the keyboards and drums. Their daughter, Joy, 13 years old, helps with the Sunday School and editing videos.

90% of the “Rivers of Life” congregation are Egyptian by birth or heritage. The remaining 10% come from Jordan, Lebanon, and Iraq. Gerges keeps in touch with his well dispersed parish through YouTube video messages that he posts every morning at 6am. He calls these “Faith Messages” and attaches the YouTube links to emails. He also records audio messages for his flock. He also shares the message via Facebook. In addition, the regular Sunday worship service is streamed live from Bayonne to more than 500 viewers from around the world.

Most who attend worship come from Christian origins, including Pentecostal, mainline Protestant, and Coptic Orthodox. It is a great leap from someone of Coptic origins, a Christian Church that has been in Egypt since the earliest centuries of our common era. Their long history and deep-seeded cultural tradition makes transition into a Protestant church difficult. Some Coptics in New Jersey would like to keep it that way. A priest from a nearby Coptic Orthodox Church even warned parishioners not to visit Rivers of Life lest they be barred from communion. This warning, however, only stirred curiosity sending Egyptian Coptics out to visit Pastor Gerges in Bayonne.

Even though many were Christian before coming to Rivers of Life, Gerges and his lay leaders developed a well-defined discipleship system to nurture spiritual growth among parishioners. It usually starts with a personal conversation with the pastor or lay leader. Then, the newcomer receives an Arabic language book that explains what it means to follow Jesus. The next step is an invitation to a small group where he or she learns about the foundations of faith. Gerges administers a test after a person completes the class. The test helps determine a person’s readiness to join the church and what kind of service they would like to do. They are given an application (like a job application) to help identify the appropriate area of service in the life of the faith community.

“I wasn’t expecting many people to complete the applications,” said Gerges. “I was surprised when so many were coming back. We had to work hard to find appropriate places of service for the people.”

Gerges and his lay leadership want to be sure that a newcomer to the church finds the right place to fit into the mission of the church. Whether it is leading youth, serving as a technician in the recording studio, forming part of a volunteer in mission team traveling to a place in need, or making hospital visits, the church wants everyone to feel that they are part of the mission.

Gerges has a larger vision to establish a Center for Arabic-speaking People that would reach out to all refugee people in the New Jersey and New York areas. He envisions this center providing much needed services to immigrants and refugees, helping them navigate life in the United States, from obtaining proper documentation, including drivers’ licenses, to finding the right kind of cemetery to bury a loved one. Often, immigrants find the US practice of burial starkly different from what they have known. This is especially true of immigrants from the Middle East and Asia. He sees a place that would provide hospitality and care, help immigrants learn how to speak English, and find a place to stay for up to two months while they find their bearings in a new land. He also would help immigrants—regardless of where they come from—to find a place to worship in their own language. Gerges and the “Rivers of Life” congregation could use some community partners and fundraisers to help them realize their vision.

When asked how the new governmental administration has affected Arabic-speaking immigrants and refugees, Gerges replied, “People are afraid.” It is much harder to obtain political asylum and get proper documentation nowadays. Many are forced to find work without documents and are at the mercy of employers who pay wages far below the minimum.

It also makes it hard to run a church. Despite having 200 or more in worship, only 2-3% of the members have the means to support the church with tithes. Many others have family in their country of origin who count on them to send funds to help them put food on the table.

“How can I not support someone who sends much needed funds back home?” asked Gerges. “They are a life-line to so many people… But we still have bills to pay, a heating system to get us through the winter, electricity bills, and contributing to the shared ministry of our denomination. It is a big challenge.”

Indeed, the church building that houses Wesley UMC was built in 1848. The parsonage is also very old. Keeping them up and running takes a lot of resources.

“And yet,” says Gerges. “We are blessed by our connection in The United Methodist Church. We are blessed to have a building and to have colleagues in ministry who provide a larger family of faith to belong to. We were blessed when Bishop John Schol visited our worship service shortly after the devastation of Hurricane Sandy.”

Bishop Schol and current District Superintendent, Rev. Manuel Sardiñas, have urged Gerges to plant satellite campuses of Rivers of Life. He plans to respond to that call as soon as he completes his Masters of Arts in Ministry degree at Drew Theological Seminary at the end of 2017.

The Pastor and lay leaders of the church would welcome any help they could receive so that their ministry could continue to provide hope and life to Arabic speaking immigrants and refugees living in the New York area. Persons interested in supporting this ministry should write to Pastor Gerges at Wesley UMC, 970 Avenue C, Bayonne, NJ 07002-3023.

In the meantime, the ministry of transforming lives in the name of Jesus continues. The Muslim woman who found thirst-quenching help continues to be in contact with Gerges and she has found a job. She found something more through the encounter. She found a lifeline to Jesus and a community of faith willing to hear her story. Rivers of Life are flowing through the streets of Bayonne and the wider New York metropolitan area thanks to the ministry of Wesley UMC, its lay leaders, Pastor Emad Gerges, and his family.