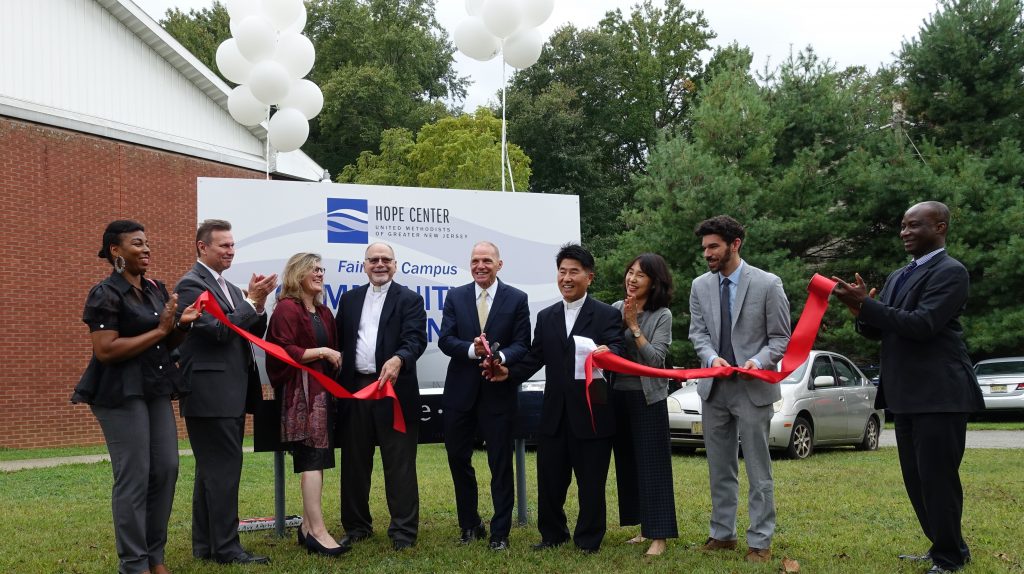 What if there were a place where education thrived, all were welcome to engage and learn and lives were made brighter and more fulfilling? Imagine a place where programs supported the elderly, youth, special needs and the entire community to make it stronger and more sustainable. Jesus would be happy.

At the new Community of Hope Center at Fairfield UMC, a place like this is coming to fruition. The 21st Hope Center as part of A Future with Hope is a place where seeds are being planted for others to nurture and grow, and on September 12, the leaders of Roseland UMC opened the doors to a modernized facility in a ceremony that included the church, conference and community leaders.

“I am proud to be celebrating because of what God is doing,” said Rev. Michael Kim, who has served as Roseland UMC pastor since 2016.

In October 2017, Roseland UMC and Fairfield UMC merged under the guidance of Gateway North District Superintendent Manuel Sardiňas. After the merger, Kim and the congregation were left to consider the future of the Fairfield church buildings which had been run down and dilapidated.

Fast forward two years, and members of the congregation, town officials and project managers gathered in unity to support what promises to be a significant enhancement to Fairfield and the greater area.

“People came together with a vision,” said Bishop John Schol as he congratulated the group for their accomplishments and wished them well. “Hope comes on the wings of spirit, but hope also comes from hands,” Bishop John Schol told the audience that day.

There’s even talk of a greenhouse being added to the property to serve as another learning center for students.

“I can’t wait to come back when people start graduating these programs or get jobs as a result of this,” added Bishop Schol. He added that he hopes five more programs like this are added in GNJ over the next several years.

The first classes, which are being facilitated by Fairfield-based A·cad·e·ME, began in late September and will continue to be enhanced as the program grows.

A Future With Hope Developer Andrea Wren-Hardin echoed the overriding optimism and touted the long-term relationships and sustainability that has been achieved, saying, “I’m excited about the future possibilities.”

One of the catalysts behind the new Hope Center was Ted Mayer, the lay leader of Roseland UMC whose experience in serving the special needs population led him to present this idea to Kim to help others and save a crumbling church.

“People need a place where they could learn a skill without having to go to college. This model gives hope to churches who may be struggling with their identity and their future, creating new vitality.” said Mayer.

The proceeds of this program are in part returned to the church, so that as the program grows, it becomes at a sustainable solution to financial shortfalls that many churches face. The church in Fairfield employs two missionaries who serve as caretakers of the church grounds and help with some of the renovations in exchange for a place to live and a viable career.

Mayer added that the eight-week classes average six to eight students per class and are designed to nurture and develop. Many of them like the horticulture and soon-to-be hydroponics class have been developed to work together, offering students a progressive education that will give them the skills needed to land a job.

“People can make a difference, and they will not only survive. They will follow the Wesleyan Way,” said Mayer.
Mayer said he called on his son, Clarke who had recently embarked on his own filmmaking business after graduating from William Patterson University. His business, called A.cad.e.ME, is focused on providing participants with skills to apply to real world work environments.

The September 12 event exuded promise from church leaders and children alike. Church members Obasi and Phina Obasi, who emigrated to the United States about 10 years ago from Nigeria, were excited about the project and what it would mean to children in the community, including their seven-year-old Nnamdi who was taking advantage of the musical program now offered by the church.

“This center means we can make an impact in the community and set up facilities that can help achieve that goal.”

In 2015 the first six nonprofits completed their grant applications, becoming Hope Centers in January 2016. They were Camp YDP, CUMI (Camden Urban Ministry Initiative), CUMAC, The Neighborhood Center, Christian Outreach Project and Pathways2Prosperity. From the Crisis Room at Aldersgate UMC in East Brunswick to the STEM program at the Asbury UMC in Atlantic City, people throughout GNJ and beyond are still making a difference for many.