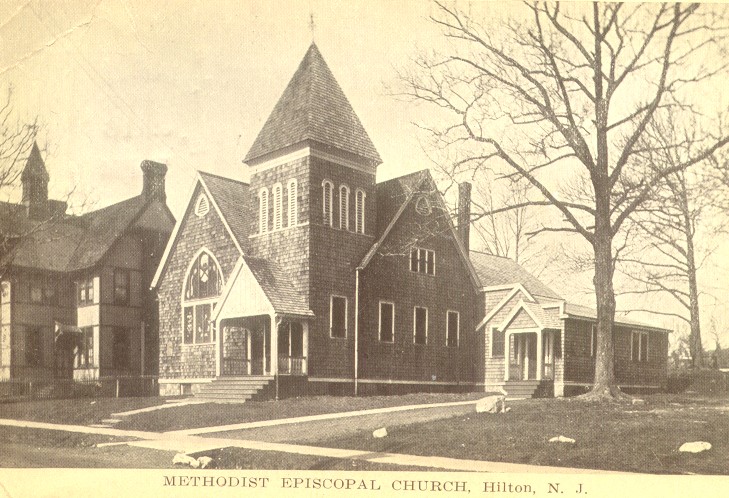 Buildings often fall to the wayside as progress and zoning needs evolve. When this happens with a church building, it is more poignant because it represents a different sort of transition. Physical walls may crumble because of neglect and justify replacement; yet the spirit of an abandoned congregation can never be replaced – or forgotten.

After the closed Hilton UMC in Maplewood was recently sold to a developer, a time capsule was unearthed in the foundation during demolition. It was housed in a cornerstone of the building and purposely made obvious enough as to not be ignored. However, not unlike a tombstone, the cornerstone had a range of a date range 1836-1898 rather than simply the year of construction.

Not unlike a graveyard, Maplewood had its share of history that had long disappeared. Originally purchased from Lenape Native Americans in 1667, Maplewood grew as a bedroom community to Newark Township, one of the three original municipalities that made up Essex County when it was established in 1683. Now, Maplewood is a suburban town that refers to its center as a village, perhaps to recall as quaint a neighborhood feel as can be expected within four densely populated square miles. It is a far cry from the rolling farms that once made up the Hilton section, formerly called Middleville, which bordered the villages of Jefferson and South Orange.

The dates on the cornerstone have significance. The year 1836 refers to the date a vacant Universalist Church chapel, which was once a cider mill, was rented for regular Sabbath services. Purchased in 1838, it was officially named the Middleville Methodist Church. From 1836-1956, 72 pastors served this congregation. Among them is Henry Buttz, who became President of Drew Theological Seminary, which was also the source for other student pastors for Hilton. In 1898, Rev. Jay Goodrich supervised the erection of a newer church building; hence the range of dates on the cornerstone.

At its height in the 1930s, its congregation numbered well over 300; there would be up to five services on a Sunday.  A longtime member described the Hilton UMC in 1936, “the little house of God was the heart and center of a picturesque village.” The congregation was proactive in the community and ran a nutrition program for seniors and housebound residents. The church celebrated its 150th anniversary in 1986. But, a decline in membership and condition of the building took its toll and it was closed in 2012.

What did the parishioners choose to leave as testimony in the time capsule? About 700 people crowded into the Hilton Branch of the Maplewood Library this January 7, to find out.

Among the items selected to put in the time capsule were a copy of The Newark Evening News of July 8, 1898. The front page ran headlines about the U.S. Navy’s siege of Santiago de Cuba during the Spanish-American War and survivors of the La Bourgogne arriving in New York. Inside was an article on the Hilton Church dedication and an ad for Bamberger’s on Market Street in Newark.

Other contents included a copy of the New Testament, handwritten lists of the officers and members of the church, a picture of the church, and a letter dated July 7, 1898. There were business cards for the pastor, the mason and other contractors who built the church, an invitation for the laying of the cornerstone on July 9, 1898 at 4:00 p.m. and an advertisement for services and a revival meeting. Lastly, there was 19 cents: 4 pennies dated 1898, one dime and one nickel.

The items in this time capsule preserve the faith of those who worshipped there. It is almost as if Rev. Goodrich anticipated the demolition of the Hilton Church long before its time. The loss of the building does not change the humanity served by those pews. The time capsule is a reminder that faith continues beyond the building.