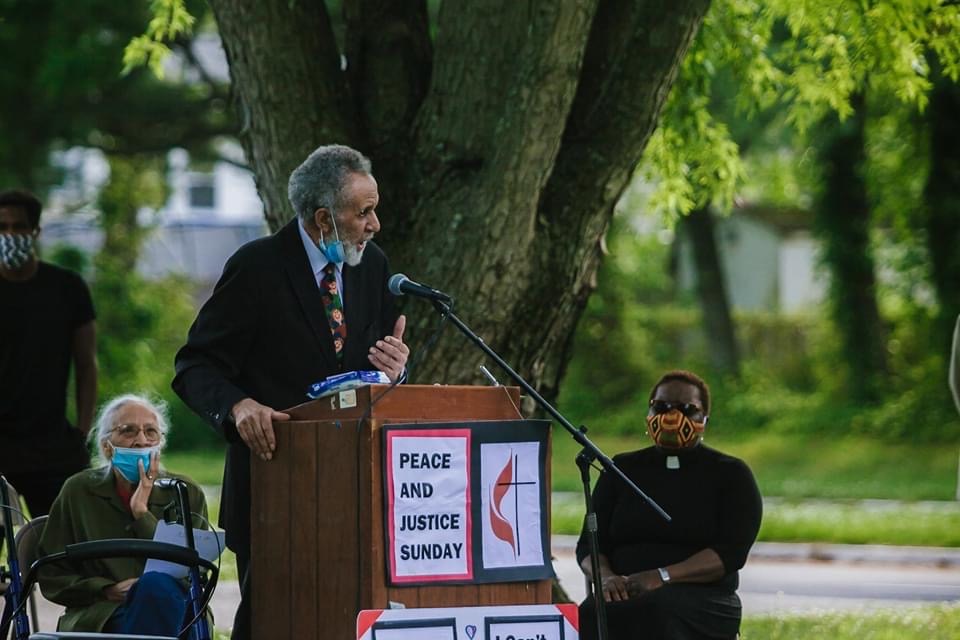 Photo: Rev. Gil Caldwell, retired UMC pastor and a civil rights activist who once walked alongside Martin Luther King Jr, said that church has been silent for too long. Credit: Aaron Wilson Watson, a New York metro area based photographer and film creator

“Black Lives Matter. Silence is not an Option” was the rally cry heard on the afternoon of Sunday, June 7, as clergy and laity throughout the Greater New Jersey Annual Conference gathered both in person at St. Paul UMC in Willingboro and online, to lift their voices to denounce the evil of racism, listen to the stories and pain of Black people and recommit to the critical work of being agents of change and co-creators of the beloved community of God through song, prayer and reflection.

With a majority of GNJ churches buildings remaining closed due to the COVID-19 pandemic, many safety precautions were taken during the outdoor event. Rev. Hector A. Burgos, district superintendent of the Capital District, and organizer of the event, clarified that the rally could not wait until later, because justice cannot wait.

“There’s another destructive virus that requires our immediate attention. That disease is called racism. Silence is not an option. Racism is sin, period,” said Burgos. “Let’s not stop working for justice until Blacks, Brown and other people of color are equally valued and fully embraced as beautifully made in the image of our Creator.”

Bishop John Schol quoted Isaiah 58:12 when addressing the crowd, which reads, “Your people will rebuild the ancient ruins and will raise up the age-old foundations; you will be called Repairer of Broken Walls, Restorer of Streets with Dwellings.” He said that George Floyd was a repairer of the breach and said more people who are white need to lay down their privilege to repair the breach. “Our systems are unjust,” said Schol who led a chant of Black Lives Matter. “This will not be a change that comes person by person, but by changing the systems and our laws.”

Charlene Walker, executive director of Faith in NJ, spoke of one of these systems. She shared a story of her 17-year-old nephew who was recently skateboarding when the police not only stopped him, but also searched him. “Policing was founded off slave patrols,” said Walker. “It’s a system that was founded on racism. Justice is what faith looks like in public. We need to declare in our homes, government and churches that enough is enough; that until black lives matter, we will not be silent.”

Rev. Gil Caldwell, retired UMC pastor and a civil rights activist who once worked alongside Martin Luther King Jr, said that church has been silent for too long as blacks have been enslaved, segregated and lynched. He called upon white people with privilege to have a conscience. “To be anti-racist is to speak out and no longer be quiet,” said Caldwell. “We must turn the nation upside down so it will be right side up.”

“Our eyes and ears were glued to the 86-year-old warrior for justice as he took his hands off his walker and held on the podium while speaking with such great strength and emotion,” said GNJ Director of Worship Lan Wilson.

Many people of color shared their own personal experiences with racism. Rev. Rupert Hall, pastor of Turning Point UMC in Trenton, shared the first time a white classmate called him a “nigger” once the white teacher had left the classroom, not realizing the meaning or impact of his words. Rev. Geralda Aldajuste, pastor of St. Paul UMC and part of the organizing team for the event, shared her experiences of discrimination of a Haitian woman urging that “anger become acts of love” and for those gathered to breathe for those who couldn’t breathe on their own.

Rev. Vanessa Wilson, pastor of both St. Paul in Mt. Holly and Magnolia Road UMC in Pemberton and chair of the GNJ Commission on Religion and Race, spoke of witnessing the police shoot two Black people during the Newark Civil Disturbance in 1967. “It is time for the nation to move forward and continue until we bring justice and equity to all people.”

Rev. Laura Steele spoke of how she and other white siblings of faith had turned their backs on their black and brown siblings. “On behalf of white people everywhere, I am embarrassed. I am sorry. We have failed you,” she said. Steele reflected on how Martin Luther King, Jr. said that it is the silence of friends that is most remembered.

“White silence is a form of violence. It’s our turn to start calling each other out. It’s not enough to just not be racist, we need to be anti-racist.”

Rev. Tanya Lynn Bennett, chair of GNJ Board of Church and Society, confessed that while the rally invitation encouraged a peaceful response, her soul was not at peace due to the recent acts of violence against Black people. “I have no peace; I am angry and determined to walk alongside my black siblings until they experience peace with justice.” The GNJ Board of Church and Society is currently facilitating a pilot justice cohort in the Capital District to address and mobilize people for action on issues of racial healing, desegregation of schools in New Jersey, and equitable access to health services for vulnerable peoples.

Dr. Tiffani A. Worthy, mayor of Willingboro, said it was time to speak up even if that meant risking popularity. “Wherever you find yourself, it is a requirement to speak up and to get uncomfortable for those who don’t have a seat at the table.”

The rally concluded with Rev. Sammy Arroyo, pastor of First UMC in Hightstown, and part of the planning team, calling those gathered to action. “This is a systematic problem that needs a systematic approach,” said Arroyo. “We all need to come together. We need to get to work. It is our responsibility. It is our call. It is our mission if we follow Jesus. The world is watching, and they want to know, ‘where is the church?’”

To see a recent Op-Ed from the New Jersey Coalition of Religious Leaders, visit here.