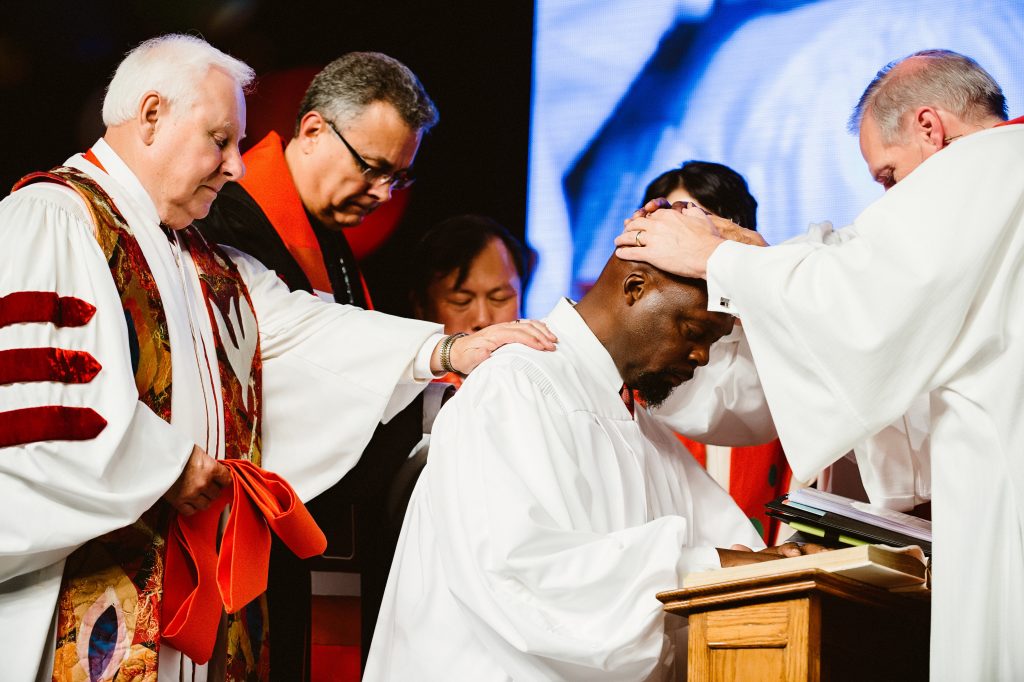 Bishop Schol ordains John E. Randall, Sr. to be an Elder at the 2016 Annual Conference in Wildwood. Photo by Shari DeAngelo

(Wildwood, NJ) – A spirit of imagination filled the Wildwoods Convention Center as more than 1,400 people sang, prayed, and worshiped at a Service of Commissioning and Ordination. The service opened the United Methodist Church of Greater New Jersey’s Annual Conference session on May 22, 2016.

As a representative of her tribe and of her church, she offered Scriptural reference from 1 Corinthians 1:10 saying, “Now I appeal to you, brothers and sisters, by the name of our Lord Jesus Christ, that all of you be in agreement and that there be no divisions among you, but that you be united in the same mind and the same purpose.”

Bishop John R. Schol, accompanied by retired bishops, Solito Toquero, and Ernest S. Lyght, led the gathering in the Service of Commissioning and Ordination. They ordained nine elders to “preach the good word of God and to administer the holy sacraments” and one deacon to “lead in ministries of compassion and justice” into full membership. An additional twelve candidates were commissioned as provisional elders and one as a provisional deacon.

Imagination Begins in the Dark

Bishop Schol framed his message around Ephesians 1:17-19. He encouraged risk taking, telling those gathered that, “the light of God shines through us best when we are stepping into the darkness.”

He asked them, “Can you imagine a church that sees its neighbors as parishioners and is in ministry with those who are homeless, hungry, incarcerated?”

Praising the generous contributions to the Mission Fund, Bishop Schol shared that with the work of Imagine No Malaria, deaths from the disease are being cut in half. Because of the Mission Fund, more than 11,000 volunteers rebuilt 234 homes that were affected by Superstorm Sandy through A Future With Hope. “You have imagined how to gift our Mission Fund so that we can continue imagining no malaria. We can continue rebuilding homes destroyed by Hurricane Sandy.”

Many responded to his challenge and an offering of more than $63,000 was collected during the Ordination and Commissioning Service to support the Mission Fund.

Bishop Schol highlighted new ways of being in ministry.  He lifted up a church with a primarily Anglo congregation that is led by a Korean pastor who is leading a new Hispanic ministry in Morristown. He encouraged church leaders to approach ministry with an imagination that stretches into new areas and has a new voice.

Challenging the church to ask new imaginative questions, he suggested that instead of asking, “’What’s our favorite hymn,’ ask ‘what is the new song God is playing in our heart?’ Instead of asking if the worship should be contemporary or traditional, ask ‘how will our ministry keep people soaring to praise and worship God?’”

“Tonight we invite others to begin the journey with us,” Bishop Schol said, naming each of the candidates for commissioning. And then naming each clergy being ordained, he asked, “Are you ready to imagine what the church can be through your ministry and leadership?  This night I ordain you to be the imaginative leader. I ordain you in the darkness. And invite you to step into the light of God.”

At the close of the ordination service, Bishop Schol urged those gathered to open the bottle they were given when they arrived and blow bubbles “praising God for this group of new clergy, sending them prayers for the future of the church, imagining with me what God wants to do with the United Methodist Church of Greater New Jersey.

As bubbles filled the hall, dozens came forward for prayer and discernment responding to Bishop Schol’s invitation. “Maybe during the worship service you began to feel a movement and God’s calling in your heart for a future of hope. This church imagines you as God’s hope for the future of the church.”