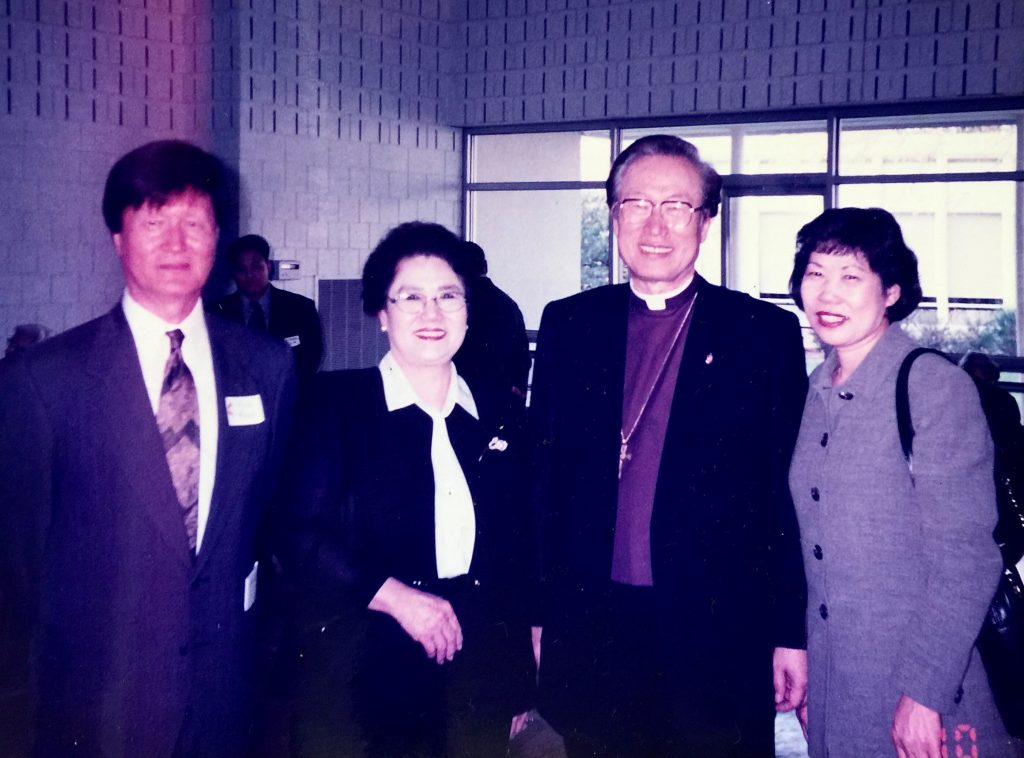 “The loud, boisterous noises of the world make us deaf to the soft, gentle, and loving voice of God. A Christian leader is called to help people hear that voice and so be comforted and consoled.”–Henri J. M. Nouwen, In the Name of Jesus: Reflections on Christian Leadership

It is in those moments spent away from the “boisterous noises of the world” that Rev. Eusun Kim finds peace and helps others to work through their struggles by listening to the “loving voice of God,” whether it is in the sanctuary, over the phone, at the dinner table with his family or during a motorcycle ride.

“We need to turn our attentions to God, rather than our own fear. Faith is fear management. This time gives us the opportunity to lean into God more,” said Eusun who for the past eight years has been the pastor at St. Andrew’s UMC in Spring Lake. In his spare time, he serves as chaplain for the charitable organization known as Blue Knights Law Enforcement Motorcycle Club, Monmouth County, Chapter 15.

Eusun is one of the 12 pastors in his family as well as the husband of GNJ’s Director of Human Resources and Superintending Support Team Jay Kim, who emigrated to the United States along with her family in 1972.

The strong sense of faith and an authenticity that draws people to them began seven decades ago when his grandmother, Woo Jin Kang, who had been widowed much like many Korean women during that time, was so moved by a visit from Methodist missionaries and their generous spirit during the Korean War in the early-1950s that she and her children converted from Buddhism to Christianity.

“That sense of faith filtered down into the rest of our family, including my father,” said Eusun, referring to Bishop Hae Jong Kim, who while working for a U.S. Marine Corps Chaplain as an interpreter, translating sermons before Korean audiences, decided to enter into ministry.

Hae was the first in his family to emigrate to the United States in 1961 at the age of only 17 after studying at a seminary in Seoul. He later facilitated his family’s entry into the country. After earning a Master of Divinity from the Methodist Theological School in Ohio in 1964, he began his pastoral ministry serving various types of churches in the Northern New Jersey Annual Conference.

Letting God guide him down a gentle but deliberate path, Hae founded the Korean Community Church, among the first Korean churches in New Jersey, serving the rapidly growing immigrant population. As a bridge person who facilitated the immigrants’ transition, he worked for the Northern NJ Annual Conference and other agencies developing Korean ministry strategies. He was an advocate for ethnic minority causes as well as having strong links to the Methodist Church in South Korea.

Always by his side for 57 years was his high school sweetheart and Eusun’s mother, Wha-Sei Park Kim, also a caring advocate for many Korean immigrants, including Korean orphans, helping them navigate a new country. Wha-Sei’s smile reflected the abundance of joy she found in life as a servant to God. It gave her great pleasure to serve others, especially her family and faith community, and she relished the opportunity to share her culture with others.

Wha-Sei died September 10 of this year, followed shortly thereafter by Hae’s death on November 3. Their unwavering commitment to each other enhanced and strengthened their ministry, and, as Jay said with affection, it was likely Wha-Sei who called for her husband to meet her in heaven.

In addition to developing 15 Korean churches, Hae became the first immigrant, Korean American bishop in 1995, serving until 2005. He was also the first Korean American district superintendent. He earned a Doctor of Ministry and an honorary Ph.D. from Drew Theological Seminary.

He was an inspiring preacher, storyteller, writer and often expressed himself through painting, poetry, photography and hymn writing. He enjoyed reading, movies, music and traveled the world.

This large dose of spirituality, inspiration and wisdom from his parents was not lost on their children, but as Eusun said, “That calling is always looming in your head as a PK (pastor’s kid). But I needed to detox as a PK to make sure my calling was authentic.”

Eusun said learning that his brother, Eugene had received his calling was a relief to him, allowing him to experience life before worrying about what the next step would be. After studying at Rutgers University, where he first met his wife who also studied there, Eusun started an entry-level job in the secular world working with children. It was here that his calling snuck up on him…it was also after he had proposed to Jay.

Jay, a first generation American, never experienced formal ministry from her parents like Eusun did while growing up in New Jersey, but she did learn what it meant to have a strong faith and be kind and genuine to others. Her father, Kakkoo Kang, and her mother, Yang Soon Kim (a surname she corrected after she proudly told me that Korean women traditionally keep their maiden  names) were founding members of the Calvary Korean Church In East Brunswick. Becoming lay elders, they were instrumental in growing the church into what it has become today.

“I always thought my mom could have gone into ministry. She prayed every morning and was always feeding others in the community,” said Jay who added that her mom’s wish that her daughter marry a pastor came true much to her delight.

A path toward ministry was not what Jay had planned, but she said, “The first time I saw Eusun preach, I saw his true heart.” She added that it is this generous heart that has encouraged their teenage daughters, Sofia and Gabrielle to embrace their faith and lead their lives with kindness. Sofia is currently volunteering for a Washington, DC-based organization that provides outreach for Asian-American survivors of domestic violence, and Gabrielle is still a high school student whose passion is art.

Jay said that teaching Sunday school over the years has filled her desire to be a teacher, adding, “Faith is the cornerstone of how we live. We try to instill that in our girls every day.”

Whether he is counseling church members or his fellow members of Blue Knights who sometimes have had their faiths challenged, Eusun sees each experience as a blessing no matter how different their backgrounds may be from his own. As he continues to lead what happens to be his ninth church, Eusun seems proud to carry on the legacy and the lessons learned that started so many years ago with an absence of judgment and a large amount of compassion and humor. He is grateful for that opportunity.