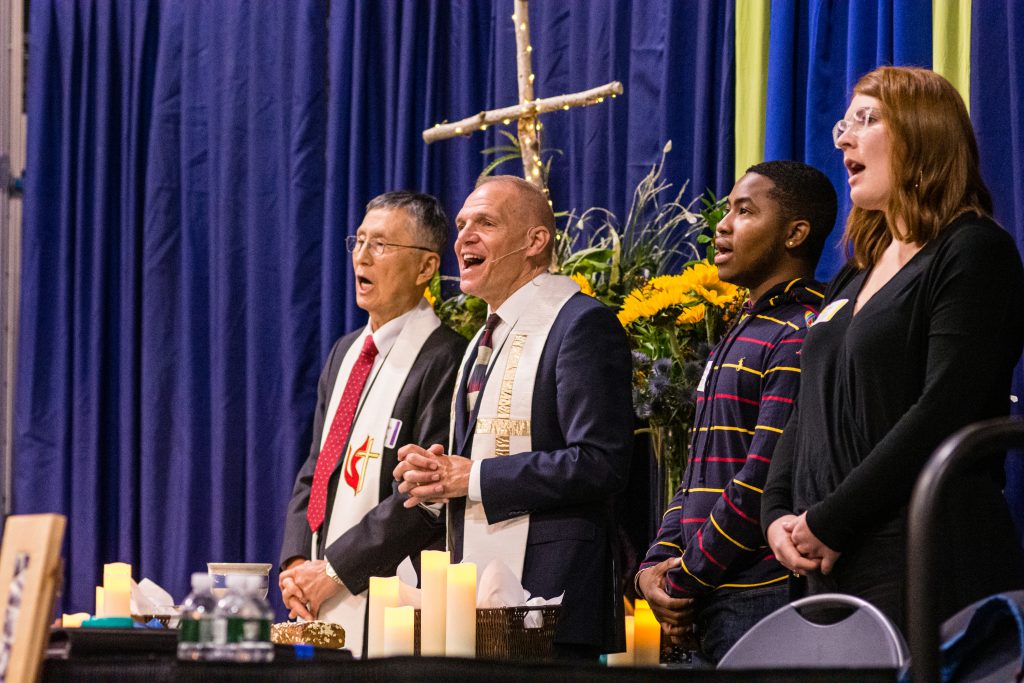 It was an historic day. The energy, conviction and motivating spirit of the people of Greater New Jersey was alive and contagious at the Special Session of the Annual Conference on October 26. From Barryville, NY, to Cape May and from Pennsville to Long Branch, United Methodists gathered to consider the report and recommendations from the GNJ Way Forward Team, which was convened in March to create a path for GNJ congregations to be in ministry with the LGBTQ+ community.

United Methodists from different theological understandings listened with open hearts and open minds—some clad in shirts saying one nation under God and others showing their support of the LGBTQ community by wearing colorful stickers on their cheeks–as the hymn, “Glory to Glory to Glory” graced the Robert J. Collins Arena at Brookdale Community College ahead of the GNJ Way Forward Team sharing its report that was several months in the making.

Overwhelmingly, the majority decided to affirm the recommendations that invited congregations to develop covenants for ministry understanding, some of which would include fully inclusive ministry with the LGBTQ+ community.

Setting the tone for the day were the more personal moments of worship—from the uplifting opening hymns of “Glory to Glory to Glory” and “Falling into You” led by Director of Worship Lan Wilson to the confessional prayer and communion. Many said that those introspective moments that allowed them to also outwardly support one another brought them the solace and strength they needed.

GNJ Way Forward Team member Rev. Jessica Winderweedle and Rev. Michelle Ryoo set the tone of the meeting with Holy Conferencing which focused on choosing words that do no harm and having conversations that reals even when there is disagreement. Winderweedle shared a little of her personal story urging others not to label someone using a noun but rather identify someone using the word that specifies his or her orientation.

A panel of GNJ Way Forward Team members, shared their process for coming to agreement. Rev. Tom Korkuch replied to questions about the change in direction of the team this summer, “We stopped pilot programs because we heard in our listening sessions that people felt like we were telling them what to do. Instead, covenants empower churches. It’s more from the ground up, and it’s voluntary.”

Another Team member who has been serving as a lay leader for 46 years since the inception of the Korean Community Church of New Jersey in Englewood, Michael Hoon Yang said, “We should remain together as Christian brothers and sisters.”

“I recognize we all do not share the same beliefs. Good people of faith will disagree,” said Bishop Schol. “I welcome and thrive in the midst of difference. I learn from difference and continue to be shaped by other ideas, beliefs and understandings. I also recognize that change is difficult – whether it be change within the community that affects the church or change within the church that affects the community.”

Bishop Schol vowed as the bishop that he would not forward any complaints for trial against LGBTQ people who serve the church or those who bless gays and lesbians in marriage, stressing that trials create division.

“Trials push faithful lay and clergy people out of The United Methodist Church. Trials of LGBTQ people and their supporters push out United Methodists with valuable gifts that are needed and wanted by congregations — and I believe by God as well.”

Bob Dietz, chair of the Council for Finance and Administration agreed, “There was a need and a hurt that we needed to address and find a way forward to work side by side in ministry,”

Conference members spoke from the floor from diverse perspectives; however, it quickly became evident that the body was unifying. From an 84-year-old lay leader who had served in the Korean War to a pastor from Guyana, people were seeing every person as a person, as a child of God of sacred worth.

“We’re going to come up with a group that can work together,” said the Navy veteran, James Moreno of Mount Horeb UMC in Warren, who worried about the youth members and their reluctance to be engaged in church. “We’re totally an open church; we have differences, but we are like a family,” he said as he nodded in agreement with his pastor of his church, Rev. George Rodney who emigrated from Guyana 33 years ago.

Sitting right in front of Moreno was another couple from the Wesleyan United Methodist Church in West Berlin, Robert and Lettie-Jane White, who expressed concern for the future of the church but vowed to be vigilant in remaining engaged. The Whites see themselves as traditionalists but acknowledge they worship each week with diverse people, including someone who identifies as transgender.

“We’re going to stick it out,” said Lettie-Jane. “If you leave, you can’t make changes.”

Voicing her support of the action was Skylands District Superintendent Eunice Vega-Perez. “Sometimes we need to break the rules. If we hadn’t, I wouldn’t be standing here today,” said Vega-Perez who emigrated from Puerto Rico. “It used to be that only the man was the head of the house. In my house, we have two heads.”

Many in the conference understood that the issue was complicated, Brett Walker, who leads both the Ebenezer and Hudson United Methodist Churches, said, “When we disobey the Book of Discipline, we open it up for more disobedience. My son is transgender, and I love my son. I would move mountains for him, but we need to be careful.”

“This conversation is hard for a lot of people. My thoughts don’t come from hate,” said Yun who added that the churches that he and Magomero represent, Central and Salem UMCs were among the first churches to merge black and white congregations.

Amid the day of rising emotions, wrestling of beliefs and expressions of hope clashing with expressions of uncertainty, there was ministry, communion, a beautiful prayer room available for all and a moment of silence.

Bishop Schol also spoke to the many in the crowd who worried that creating a path forward on ministry with the LGBTQ+ community was diminishing a commitment to the mission, addressing the matter directly by indicating that he would stay focused on our mission.

“I pledge today that as we seek a way forward in one area, it will not diminish my leadership and efforts to continue to do the work to end privilege, oppression and discrimination.”

As a show of GNJ’s continuing focus on ministry in spite of the concerns over polity, Lay Leader Rosa Williams and Director of Mission Ashley Wilson announced that GNJ would pack half a million meals for the hungry in a conference wide mission project on March 21.

“For those of you who are ready to move forward, I celebrate the next step with you,” said Bishop Schol who urged those who are uncertain to keep asking questions so that all United Methodists can learn and grow together. “God can see us through if we are open to each other.”

For additional information regarding the GNJ Way Forward including videos, the episcopal address and the legislation that was passed, go to the Way Forward pages of GNJ website: www.gnjumc.org.