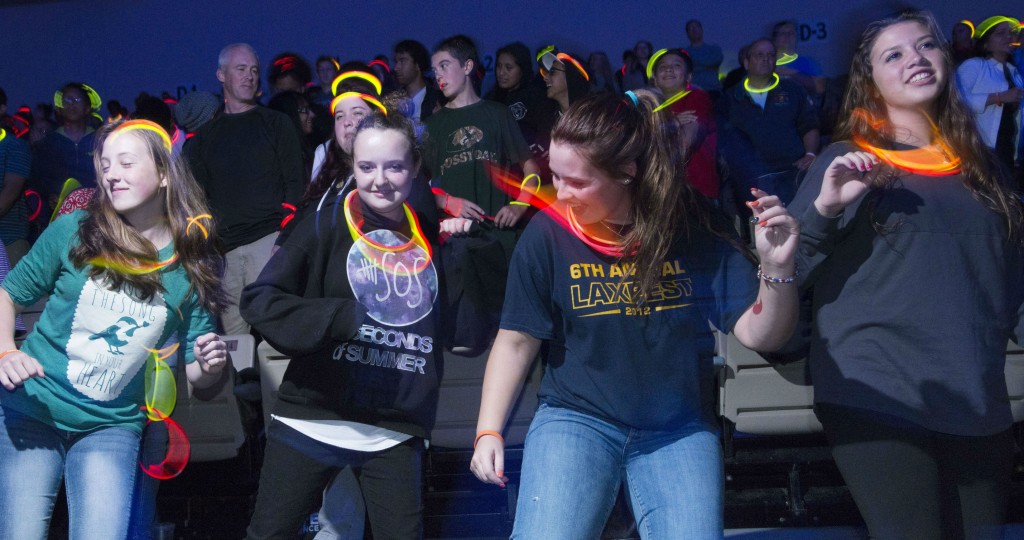 The inspiration inside proved to be a greater force than the wind and precipitation outside at the IGNITE Youth Conference on Oct. 2-4. Approximately 700 youth attended the second annual event at the Wildwoods Convention Center that had the theme of “fan into flame,” based on a Bible verse in 2 Timothy.

Featured speaker Gian Paul Gonzalez, a high school teacher in Union City, N.J. who became known for his “all in” speech that inspired the New York Giants to a Super Bowl victory, applied that same message to gospel teachings throughout the weekend. The result is that several hundred youth made a first-time commitment or renewed their commitment to Jesus Christ.

“This weekend was a real eye opener for me,” said Natalie Hopkins, who attended the event with Christ UMC of Piscataway and is a senior at Piscataway High School. “When they called everyone down and asked if you wanted a deeper relationship with God, it was like a tidal wave for me.”

On Saturday night, Gonzalez encouraged IGNITE attendees by using an example of a shark. The shark is relentless and even though it fails sometimes, the shark doesn’t stop becoming what it is meant to be. Gonzalez offered each young person a shark tooth to take as a reminder to persevere during difficult times. Brian Deery, a high school junior who attended with the Sparta UMC youth group, said the weekend was a special time for him.

“I think it was kind of like fate for me, because I hadn’t planned on being here,” he said. “I felt a real need to know my purpose. I know I need to set goals and I need to go for them and I need to be ‘all in’. When he started talking about the sharks, it let me know that just because you fail once or twice, that if you are ‘all in’, you can’t give up.”

Gonzalez shared that there were times in his life that he was not “all in” and that the end result was not a good feeling to have.

“I needed to make the choice that I needed to go after life the way God created me to,” Gonzalez said. “I can’t go deep with God unless I’m all in. If you go halfway in on something, and then give up, that leaves you with an empty feeling.”

That “all in” spirit seemed apparent from the opening of IGNITE. Even though the heavy wind and rain in Wildwood flooded one of the main roads coming into the beach town, more than 600 out of the 750 registered to attend made it in on Friday night. The rest came on Saturday morning.

“The fact that so many braved the weather meant a lot to everyone involved,” said GNJ Director of Worship Eric Drew, who was the primary planner for the event. “We knew with the talent lineup that we had and with the preparation and prayer put into this event that God was ready to move in a big way.”

While Gonzalez was the featured speaker for the weekend, Preston Centuolo served as emcee and gave the Saturday morning message.

He reminded youth that even though society likes to compare people to each other, the only true measure is against yourself.

“You don’t have to be the greatest, you just have to be your greatest,” he said. “And that’s because you are connected to The Greatest.”

Other highlights of the weekend included musician Phil Wickham and his band leading worship, comedian F.U.D.G.E., rapper KB giving a high energy concert to finish off Saturday night, the Ground Zero Masters Commission and Kurtis Parks leading worship on Sunday morning.
Young people in attendance were encouraged to turn the Convention Center windows into prayer walls by writing inspirational words and prayer requests. They also had the opportunity to attend workshops, play basketball, volleyball and other games and attend a coffee house that featured several young performers from around the conference.

“It was a great weekend for us,” said Piscatway UMC youth leader Karen Griffith. “The speakers were all tremendous. The kids really liked what they said. We are ready to go back home feeling good and we are all feeling really motivated.”

Find out more about IGNITE here