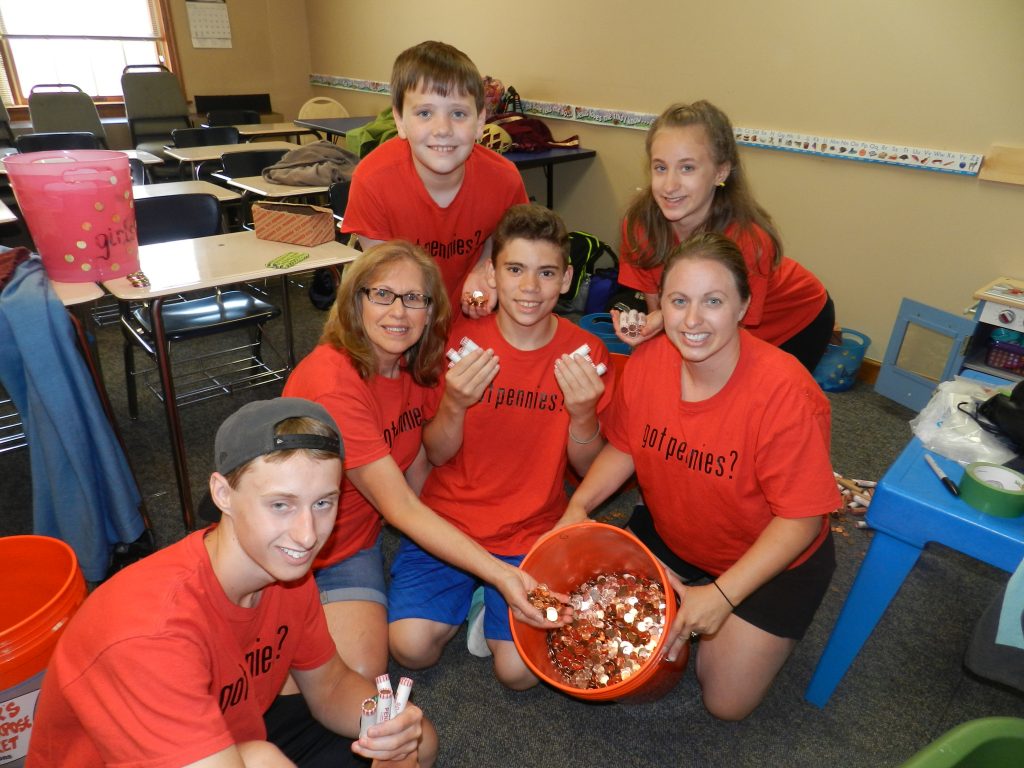 SICKLERVILLE – Pennies seem worthless. They cannot buy anything today – no more penny candy. But, if you ask any VBS kid from Sicklerville UMC, they will tell you pennies are very valuable. For over 30 years, they have searched high and low for every penny around. During the week of VBS this summer, mission leaders for the past 15 years, Jan Devoe and Cheryl Strohl, have taught that “pennies show us how God can take something small and make it into something big.”

The pennies at SUMC have definitely made something big. Over $30,000 has been donated to various missions. During the week of VBS, the Sanctuary became the staging area for a creatively elaborate tracking system and a contest between the girls and the boys.

The contest is taken very seriously. Even the youth and adults get involved. For several years, the youth have set an example for the younger kids by donating their entire paychecks in pennies or dramatically carrying in boxes or large containers full of pennies. Everyone enjoyed the theatrics and the lesson of generosity was well received. The children got to watch their progress all week through such elaborate sets as a rocket ship cruising toward the goal across the ceiling of the Sanctuary or a roller coaster dramatically climbing and then gliding to the finish. Jan Devoe and Cheryl Strohl created breathtaking sets to encourage the kids and teach them that giving can be exciting, which is what motivates every child to raid couches, cars, and laundry (with parents’ permission, of course) for pennies. One year, some ambitious girls set up a lemonade stand and asked for payment in pennies. One customer was so taken that he gave them $100 on the spot. The girls won that year, but the rivalry never overshadows the goal and the mission.

The focus on missions and the people who will benefit from the children’s generosity is because Jan and Cheryl drawn the group back every day – back to the reason for the penny hunts. Jan and Cheryl are a mother and daughter team who include their children/grandchildren in all parts of the process. The planning, set design and building, heavy penny bucket lifting, the bank trips, long days and late nights are the team effort of a family that exemplifies generosity in all they do. The work they do together is a tradition in the making and SUMC is blessed for it.

Many missions and missionaries have been blessed by the pennies collected during the VBS week at the church. This year was no exception. Over $2,000 was raised for Handivangelism ministries. That is more than 200,000 pennies, if you are counting. Pennies aren’t worthless especially when you put A LOT of them together. God has definitely made something big.