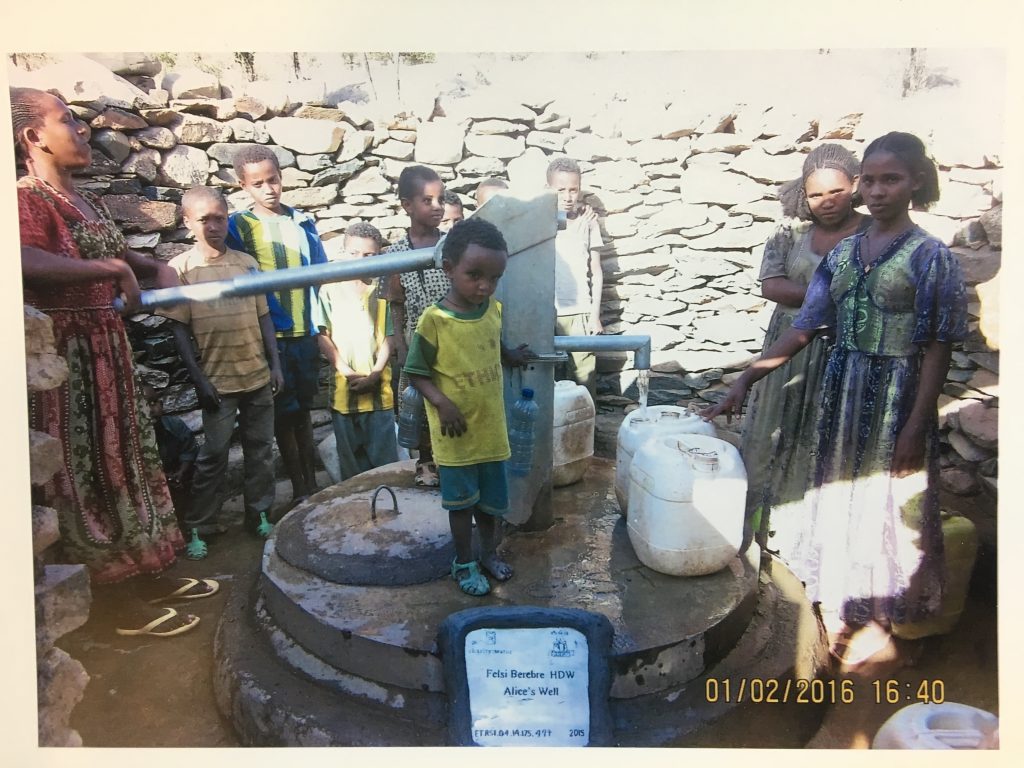 FARMINGDALE – Mention the name Alice Hassard to members of the Farmingdale First UMC community and what comes to mind is a unsung local hero who gave tirelessly of herself to those in need. Whether sewing quilts for the elderly and newborn babies or raising funds for those coping with disasters by providing warm blankets, Hassard, a past Farmingdale United Methodist Women President for many years, was well-known for supporting missions. So when Hassard passed away in August 2009, this treasured member of her church community had a project started in her honor dubbed ‘Alice’s Well.’

“Alice had a dream to build a well for a village in a third world country. She knew what a nearby source of fresh clean water would mean to the people of that country – especially to the women and the children,” Marie Andreen, Chairperson Mission Outreach and Member of United Methodist Women, said. “Alice was a woman who gave what she could, when she could, to whatever project was before her. Just weeks before her death she was sitting with me in the front yard of my mother’s home helping with a yard sale for the Mission Outreach Team. While sitting and talking with my aunt, she questioned me about what project could be undertaken by the Mission Team. A water project was on the top of the list. After her death, I was approached by members of the United Methodist Women about what could be done to honor her. A water project was the first thing that came to mind and so it began.”

According to Andreen, the Farmingdale United Methodist Women and Hassard’s family wanted to give the gift of pure, safe water to a village that lacks what “we all take for granted” as a memorial for her.

“The mission chosen by Alice’s family is to dig a well for people in an African village where there is no access to water, much less clean drinking water. Alice’s presence in our community was very much like clean water to drink, to bathe in or to wash clothes. She relieved systematic suffering wherever she went, even in the midst of being poor herself,” Dawn Richards, a former member of the Farmingdale United Methodist Women, said.

“Contact was made with organizations that build wells throughout the world. Charity:  water was the agency selected because the organization works closely with the villagers throughout the entire process and reports back to those who have given the money for it,” said Donna Jordan, former Farmingdale United Methodist Women President and current church member. “Charity:  water selects the village that they recognize as having the greatest need.”

According to agency, the water project funded in the Democratic Republic of the Congo allowed 250 people of Budondo-BF Mahere to have access to clean and safe drinking water. The project took 22 months to complete and for many, was a gift and an answer to years of prayer.

“It was a sudden realized and unexplained hope in a forgotten place where dreams of a better future had died long ago,” Scott Harrison, founder of charity:  water, said.

According to Jordan, the second well was built in Felsi Berebre, Ethiopia and completed in September 2016.

“We recently sent in money to pay for a third well in June 2017 which I was told would take about the same time to be completed as the other two wells – 18 to 22 months. You always have to consider the time line can vary due to circumstances beyond anyone’s control. This third well is a rehabilitated well to be built in Malawi. Now we are again in the process of raising funds for a fourth well. We are very fortunate to have so many sources of donations to Alice’s Well Project,” Jordan said.

“There were many who donated just a dollar or two, some who gave every month until we had enough. A young woman made many yarn covered coat hangers that were given with a five dollar donation.  A lifelong childhood friend Carol, who knew she was dying, requested that donations to Alice’s Well Project be made in her name. Many donations from many other groups of United Methodist Women who knew my aunt sent donations. My Aunt Alice would be amazed by this gift that is given to honor her. What better tribute than to give the gift of living water; clean, clear water. My aunt was a woman who knew what the widow’s mite was and gave it and more through her charitable endeavors as a United Methodist Woman, a Christian woman and a woman of this world,” Andreen said.