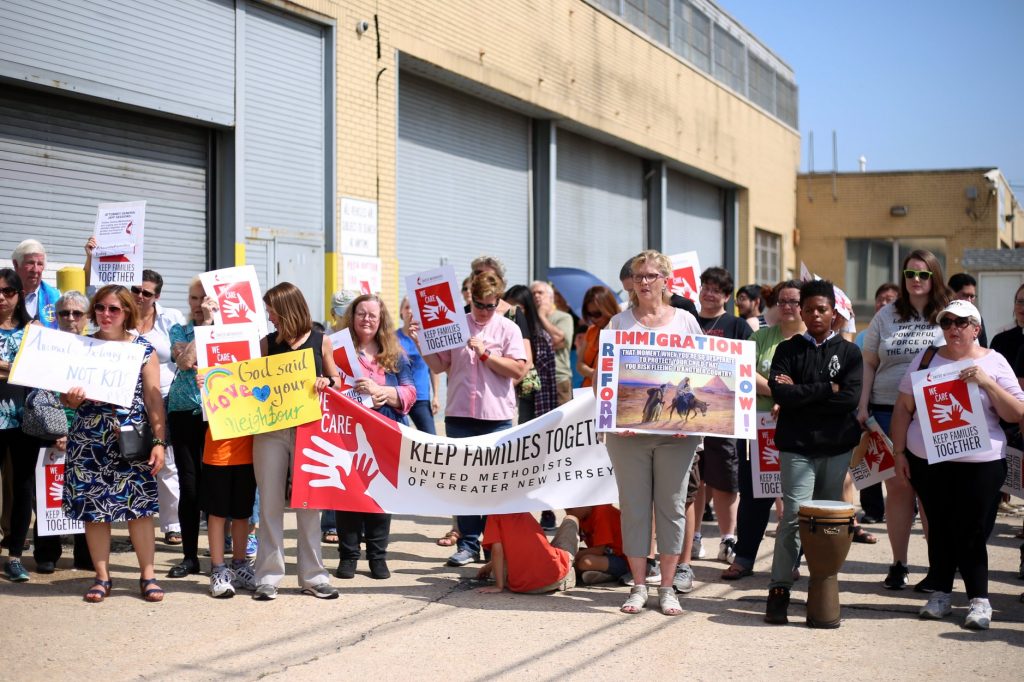 Nearly 100 community members and church leaders gathered outside the ICE detention facility in Elizabeth on July 28, holding signs of solidarity for immigrants being held inside the building across the U.S. Photo by Kamelia Ani

ELIZABETH – Church leaders and dozens of community members from across Greater New Jersey gathered on Saturday, July 28 outside the U.S. Immigration and Customs Enforcement Contract Detention Facility in Elizabeth to protest and pray for those being held after trying to seek asylum in the U.S. The crowd heard words of encouragement and calls to action by community activists and faith leaders, including Bishop John Schol. The rally was sponsored by the GNJ Board of Church and Society Immigration Task Force, Hispanic Committee, United Methodist Women (UMW) and Black Methodists for Church Renewal (BMCR).

The crowd of close to 100 protesters held signs and sang along with a choir from Asbury Park. They held hands and bowed heads in prayer; the silence punctured only by amen’s as they stood in the scorching heat of the day. Two security guards stood at the gate to allow rare visitors into the detention center.  When asked how he felt about the rally, one guard said he was just doing his job and it was up to the higher-ups to answer to the public. Across the street, a female guard stood by herself with hands clasped, almost moved to tears by the prayers and song.

“This is not a protest. This is inspirational,” she said. “The other protests we’ve had here lately have gone violent. People don’t understand it’s our job. These people are doing the right thing. When I go home I pray for all the people detained here.”

“These are the moments when pastors, bishops, and church members show the world that our faith extends beyond our church walls and that justice matters to us,” declared Rev. Dave Delaney, Chair of the GNJ Immigration Task Force. “We were blessed to have Mark Miller lead us in song throughout the morning because his song, ‘Make the Circle Wide,’ reflects what we believe as United Methodists. God’s love is for all; we are to love all; and we do care each day for all who are suffering injustices wherever those injustices might be occurring.”

Bishop John Schol inspired those gathered with a reflection of how Christians are to live our lives.

Harriett Olson, General Secretary of United Methodist Women, travelled from Washington, D.C. to take part in the vigil. She encouraged the group to act, attend rallies, and contact their government representatives.

Two women in the crowd seemed particularly invigorated by Olson’s words. Julia Aberget and Joanne Booth from Pennington are not new to the idea of protesting.

“We grew up in 60s and have that tradition of getting our feet on the ground, showing up and showing dismay and disappointment for what’s happening,” said Aberget. “There’s a vacuum in leadership in the country and the church can fill that vacuum. Rallies like this fill a need for people in the church to show loyalty to immigrants and to the gospel. Along with other neighboring churches, we’ve sponsored race and diversity forums discussing local issues. We can and should use the church as a tool for empowerment for those who do not have a voice.”

The crowd heard several speakers including Bishop William Stokes of the Episcopal Church of New Jersey, bowed in prayer as GNJ clergy lifted up prayers, and joined together in song as Drew University’s Mark Miller led music along with a choir from Asbury Park’s Spirit of Truth Vision Outreach Church.

One of the Prayer Rally’s most powerful moments occurred when one of the speakers asked the crowd to touch the wall of the detention center during a prayer. More than one hundred pairs of hands touched the walls sensing those who were on the other side and felt God’s Holy Spirit flowing amongst their neighbors who gathered with them for justice and for God.

“As United Methodists of Greater New Jersey, along with other people of faith and people of good will, we recognize, embrace, and affirm all persons, regardless of country of origin, as members of the family of God,” said Rev. Hector Burgos, GNJ’s Director of Connectional Ministries. “We are here because we care!”

Burgos encouraged attendees to continue advocating for children, young people and immigrant families and to develop awareness programs to educate congregations and communities about the importance of advocating for immigrants.

The speakers denounced the mistreatment of immigrants being held in facilities across the U.S. including the facility in Elizabeth. The crowd urged federal representatives to take steps toward the adoption of a fair and just comprehensive immigration policy that respects human beings who are escaping from torture, potential death, and inhuman conditions in their home nations.

“In our State of New Jersey, in Elizabeth, ‘strangers’ in our land are being held by our government’s Immigration and Customs Enforcement agency at a ‘for profit’ detention center,” stated Delaney.  “These individuals came to our nation believing that there was hope here, a possibility for a future, and a people believing the words of the Statue of Liberty have not been welcome. In ever increasing rates, human beings who have struggled to get to our nation have been arrested and detained.”

Leaders urged the crowd not to remain silent as those less fortunate themselves were mistreated, citing “Love your neighbor as yourself” (Matthew 22:39) and “You shall not oppress a sojourner. You know the heart of a sojourner, for you were sojourners in the land of Egypt” (Exodus 23:9). They also encouraged the power of prayer.  Drew Theological School Dean Javier Viera put forth a prayer calling those in government power to have an awakening and change of heart; that they should “allow the love of God to reflect in their treatment of all his children.”

GNJ’s Immigration Task Force remains committed to ensure United Methodists in New Jersey and other people of faith continue providing prayerful witness to faith traditions which consistently teach to love all and be welcoming. Those interested in working with GNJ’s Immigration taskforce can e-mail Delaney at pdatstpauls@gmail.com