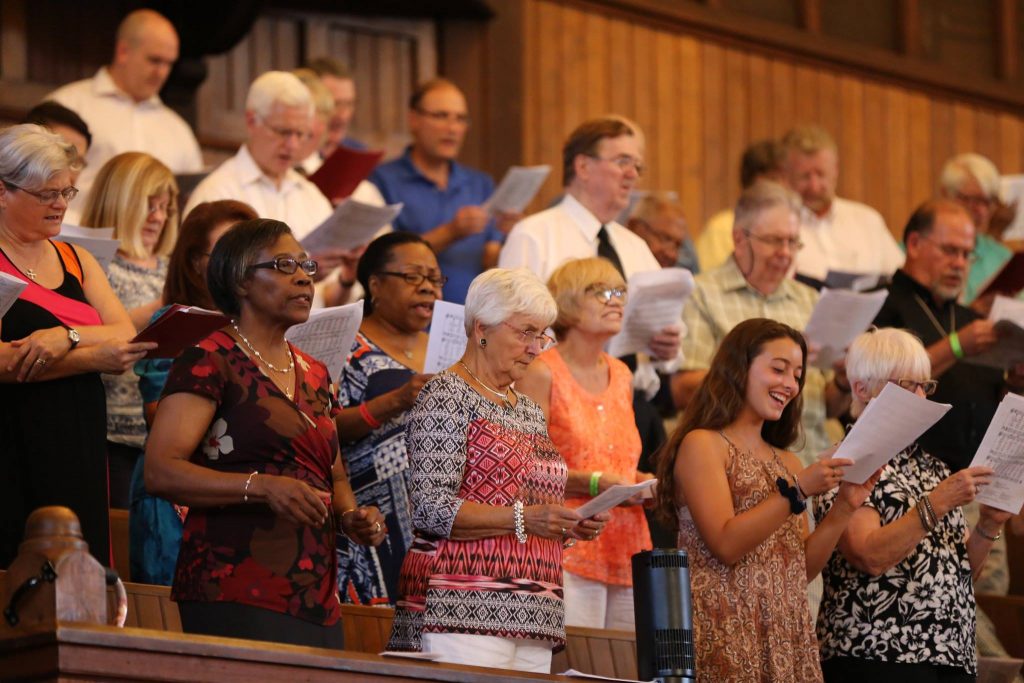 A choir made up of over 150 members of GNJ and the Ocean Grove Camp Meeting Association sang a blend of traditional and contemporary worship songs at a 'Night of Worship' on Aug. 6 inside The Great Auditorium. Photo by Josh Kinney

The evening of August 6 brought together GNJ clergy, laity, church members, United Methodists, Ocean Grove residents and vacationers, and bystanders from off the beach into the historic Great Auditorium for an uplifting night of praise and worship.

“We were in the choir,” said Rev. Paul Fenn of Buddtown UMC. “What a spiritual experience we had. Singing praises to our Lord and Savior couldn’t be more rewarding. Thank you for the opportunity to worship in such a beautiful church setting.”

A choir made up of over 150 GNJ clergy and laity, as well as members of the Camp Meeting Association, came together representing various ages, genders, and races to sing a unique balance of worship songs. GNJ Worship Director Eric Drew brought a praise band of young adult worship leaders and musicians from congregations throughout GNJ to lead the service.

“I loved being one of the oldest people in the band,” said Drew, noting that several of the band members had never been to the Great Auditorium before. “It is exciting to think about bringing new generations of worship leaders to such an iconic setting in the history of the United Methodist Church.”

For Drew, the event was one of the highlights of his summer.

“I love large platforms and congregations. It’s always fun to get big groups of people together to sing and worship,” he said, expressing his excitement in being a part of a significant milestone for the relationship between GNJ and the Camp Meeting Association. “For us, it is a truly special venue to come together and worship; it takes us closer to our roots and is sacred ground for many.”

Drew, who wrote and recorded a worship album entitled ‘Center of It All’ to be a resource for new, Wesleyan worship music, found joy in playing some of the songs.

“I know that churches are downloading and singing the songs in worship services on Sunday mornings, and it was also incredible to hear so many people engaging and worshiping with them in Ocean Grove,” he said. “As a songwriter, Ocean Grove is hallowed ground where Fanny Crosby and others wrote hymns and songs which became centerpieces of the Christian Church in the states. It’s exciting to think that myself and many other new generations of worship songwriters can carry the tradition of ‘singing to the Lord a new song’ which expresses the timeless message of the gospel in sounds and expressions of worship for new generations of followers of Jesus Christ.”

The event showcased a cohesive compromise that provided a space for the traditional and contemporary to exist in unison and within the context of a matchless historical venue.

“How many times do we talk about this through sermons, articles, and resourcing, but don’t model it?” asked Rev. Catherine Jordan-Latham of Monmouth Grace UMC and member of the evening’s worship band. “That night we showed that this can exist together. It wasn’t an easy process, but that’s the whole point because worship is messy,” she said. “But look what can happen if we adjust and stretch and make sacrifices! Was it perfect? Of course not, but for me, it modeled the possibilities of what could happen.”

Jordan-Latham found the experience of being on the worship stage looking out at different ages, races, and genders freely worshipping, fulfilling. A group of young people who came from the beach joined the crowd, lifted their hands in worship, and immersed themselves in the event.

“Seeing that reminded me of how present God is and how much God is working in situations that I have no idea about,” said Jordan-Latham, who advocated for making the event an annual tradition. “It also reminded me how God can touch the most unlikely of people. It’s still sitting with me weeks later.”

Bonnie Graham, a longtime member of the Ocean Grove Auditorium choir, felt blessed to participate and said that the evening was “proof positive that traditional and praise music can be presented at the same service, and they can complement each other beautifully.”

The worship experience was made whole by efficient ushers, and communion servers, which Jordan-Latham noted was equally important as making sure scriptures match worship songs.

“The beautiful array of genders and ages, clergy and laity, serving communion was moving,” she said. For some, the sacrament was a sacred tradition and for others, a sincere moment of raw brokenness.

“I had never been inside the Great Auditorium, but as a Methodist in the Northeast, I knew all about it,” stated Jordan-Latham. “There were some who were comfortable in that space and others who were a little uncertain, and those who were able to become comfortable during the actual event. But that’s the beauty of worship, because we have that on Sunday morning’s, too.”

Jordan-Latham recognized pastor friends and colleagues in the crowd whose facial expressions showed they were being ministered to.

“Seeing these people who give so much of themselves being fulfilled by this experience really says something, and it’s a reminder that we need to make spaces for moments and refueling and refilling,” she said.

Bishop Schol’s inspiring sermon expanded upon that very point; the tending of the soul.

“Night of Worship was a way to expand our congregations beyond the walls of our local churches,” said Jordan-Latham. “It was a way to have a shared experience that doesn’t have to be in our church but in the church.”