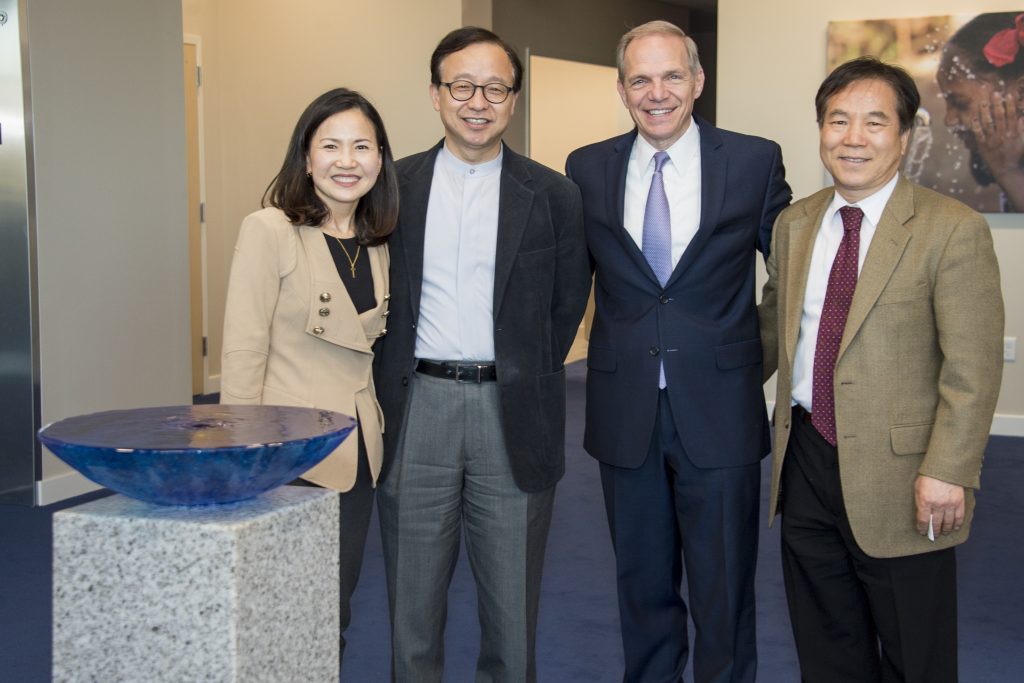 Entering the third year of the Mission Fund with approximately 50% of the goal reached, Bishop Schol invited the clergy and lay leaders for Greater New Jersey churches who have made the largest commitments to the campaign to join him in a special dinner on the eve of the dedication of the New Mission and Resource Center.

The invited guests included representatives from congregations who have contributed the most to date and those who have the highest average per worshiper.

“It is important to recognize not just congregations that have the resources to contribute large amounts but those congregations whose generosity has exceeded expectations in the average gift per worshiper,” said Bishop Schol.

The $12 million Mission Fund is a part of the Greater New Jersey strategic plan that was passed by the Annual Conference Session in 2013.  That plan called for congregations to contribute an average of $90 per worshiper in order to meet the goal.  To date, the average contribution per worshiper is $50.

Last month, Bishop Schol made a renewed appeal for the Mission Fund Campaign and together with his wife Beverly, increased his own pledge from $53,000 to $60,000 in honor of their 60th birthdays this year.

The Mission Fund was designed to raise funds in support of local, regional and global needs.  Congregations were asked to run a multiyear campaign that would help fund a local mission project and contribute toward the larger goals for A Future With Hope and Imagine No Malaria.

Vincent United Methodist Church in Nutley embraced the program.  Running from May to July of 2014, the campaign covered the first three Sundays in May with one highlighting A Future With Hope, one highlighting Imagine No Malaria and one highlighting a local project to move the ministry forward.

Vincent was one of the churches celebrated at the Bishop’s dinner in April and Reverend David LeDuk joined 9 other congregations that were equally lifted up.

“The local project we selected was to help a family in our congregation who has a special needs son.  They needed help with renovations in their home so that it could accommodate his wheelchair and he could have mobility and independence,” said LeDuc.  “We were astonished and delighted to receive 39 pledges totaling $64,125 for our efforts.”

While gifts are still coming in through the campaign, to date, Vincent UMC has contributed $45,122 with an average gift per worshiper of $460.43 putting them in the top 5 congregations in both the total dollars raised and the average per worshiper.

“God was powerfully at work among us through this campaign and will richly bless this ongoing effort of Greater New Jersey and our church,” said LeDuc who attended the dinner with his wife Karen.

Bethany UMC in Wayne was another church celebrated during the dinner.  In a special announcement at the first anniversary of Superstorm Sandy, Associate Pastor Hoo Sug Lee announced their commitment of $400,000 to the campaign.   To date, Bethany has already fulfilled more than $100,000 toward that pledge and Reverend James Gisung Lee represented his congregation at the dinner.

The other churches recognized for total amount pledged include Trinity UMC in Hackettstown, First Korean UMC in Cherry Hill and Arcola UMC in Paramus.

Churches recognized for the average amount raised per worshiper included Allentown, New Sharon, Drakestown and Wenonah.  A full list of churches and their average contributions can be found below.  For more information on the Mission Fund, please see www.gnjumc.org/missionfund.