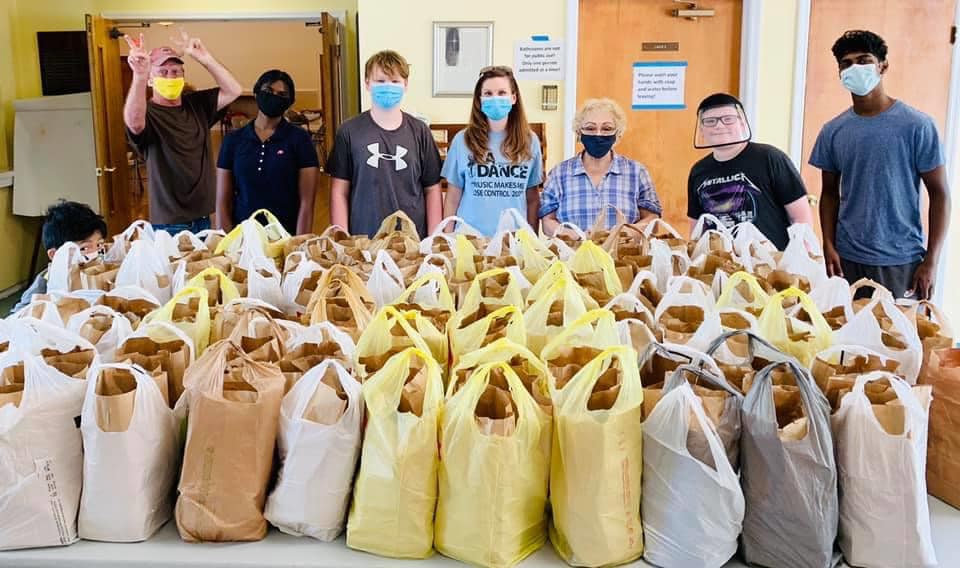 Connectionalism has always been an important part of the United Methodist Church. In part, it is what links the hungry to food and connects the sad and less fortunate to laughter. Ultimately, it’s what connects us to one another and to God. But the unexpected changes caused by the pandemic have amplified the need to connect and not just over a wireless network. In the face of adversity, networks of ministries and missions, both within and outside the United Methodist Church, have become stronger and stretched wider because of these connections.

“I really believe in the connectional value of the church. We’re never alone,” said Rev. James Lee who leads Wesley UMC. “One of the things I love about the church is that there are always people I trust and can reach out to.”

When it came time to consider the use of the money they would have received from the Payroll Protection Program (PPP), the people of Wesley UMC saw their blessings as an opportunity to help others and pay forward the blessings they had received.

“It moved the hearts of the people in our church leadership,” said Lee. “We were lucky to be able to give back.” Wesley UMC was one of 15 GNJ churches who recently donated the value of 10 percent of the funding it received or would have received through the CARES Act back to the COVID-19 Relief Fund for congregations who were denied funding.

At Wesley UMC the tapestry of connection stretches from beyond the churches in GNJ and all the way from South Plainfield, NJ, to Nyagidha, Kenya.

“We think locally and globally,” said Lee who likes to embrace the philosophy that God calls us to say “no” to the very good things, so that we could say “yes” to the best things.

The connection with a small village on the shores of Lake Victoria in western Kenya called Nyagidha began in 2007 when a Wesley UMC member’s mom started attending and sharing stories of her husband’s village in Kenya whose children needed help. A successful campaign was hosted to provide water tanks for 20 households and a larger tank to serve the full community.

Over the years the church has contributed to the Nyagidha community’s health, education and life with Christ. In 2009 after Pastor Lark McCalman visited the small village to discover the inordinate need for childcare, Wesley UMC’s Friends of Nyagidha was formed to work with the village, identifying needs and ways to raise money to help support them. A year later the Child Care and Education Centre for the village was officially opened, which provided a safe place for adults in the community to leave their children while they went to work.

When GNJ’s Palisades District Superintendent Rev. Gina Kim became pastor, she organized a trip of about 12 people to travel to Kenya in 2012 to foster the mission.

“Each year we added another school year to the school. We formed relationships with Kenyans, and they formed a support group for those helping them,” said Kim who noted that the “Today is my favorite day” line she often says and uses in her email signature was derived from the village when she heard a group of children singing the song of the same name.

“It has become even more apparent today that the world is indeed my parish,” Kim said.

Today, over 300 children from pre-K to eighth grade are educated in the center, but the building’s structure made of corrugated iron is in serious disrepair and makes the interior temperature unbearably hot for teachers and students.

In spite of the limitations caused by the pandemic, in 2020 the congregation at Wesley UMC opened up its “Bricks and Books” campaign with a goal of raising $3,000 over a three-week period. That goal was eclipsed in September when $7,251.66 was raised.

“Every penny will go towards the bricks that will build 13 classrooms and the books that will provide education for the children,” said Lee. “It showed that with the right storytelling, people were moved to help.” He added that the plan is now to return to the village in 2022.

Closer to home, Wesley UMC is also changing lives. Every Friday a group of volunteers, led by Connie Palmer who is a member of mission, roll up their sleeves, pick up boxes of collected food and travel to nearby New Dover UMC in Edison to support that church’s strong food ministry.

This connection between two churches did not go unnoticed. When Centenary UMC in Metuchen saw how Wesley UMC was able to bolster the wonderful work that New Dover UMC was doing, they too knew they had to be involved.

“Now all three of us are working together,” said Lee.

On Sept. 11, the trio shattered a previous record as they packed 438 total sandwiches

Donations can be brought directly to New Dover at 687 New Dover Road in Edison or can be dropped off at 526 Harrison Ave, South Plainfield. To view Wesley UMC’s campaign, visit https://www.youtube.com/watch?v=2IkNW2DWl4E.

Also among the 15 churches who have tithed a portion of their PPP funding are Hope Church in Voorhees and Trinity UMC in Hackettstown.

“An ounce of love is worth a pound of knowledge.”—John Wesley

If a picture is said to be worth a thousand words, a paraphrase from what the famous 19th century playwright Henrik Ibsen penned, then what are nine thousand random acts of kindness worth? For Pastor Heather Mandala of Hope Church in Voorhees and Mount Laurel, NJ, their worth has exceeded her expectations.

When the #HopeOutside initiative began last June at the Hope Church, Mandala and her congregation were blind to what the future held. But that didn’t stop them from moving forward with their plan to spread hope throughout their community, both individually and as a group, for three months. For the congregation at Hope Church, hope is “a meeting place.”

“It has been super exciting to watch,” said Mandala who added that the purpose of the program was to move outside of themselves and their homes. “By helping others, we are able to do this.”

Summers for youth at Hope Church have always been shaped by the idea of helping others, so #HopeOutside was a way to do so safely and differently than ever before.

The #HopeOutside initiative was divided into two parts: united focus and random acts of kindness. For the united focus part, each week a group was chosen to be blessed in some way. Starting with first responders and continuing with grocery store owners, fire and police officers, bus drivers and crossing guards as well as organizations like Urban Promise, the youth blessed others by doing things like baking cookies, sewing masks or buying and delivering lunches.

For the second part, individuals were challenged to do random acts of kindness. By late September more than nine thousand acts had been done. Whether it involved leaving a treat on the playground or taking in trash cans, these acts made a difference.

“When Haley and Elizabeth made lemon bars for a recently widowed neighbor, they had no idea how their little act of kindness would be treasured,” said one parent, Sandy Brown, whose daughter and her friend delivered the treat with a note attached to the man in June.

“They received a simple thank you, ‘I like lemon bars,’” Brown said. “In September when their grandma delivered soup to the same gentleman, he said, ‘I kept the card” that said, ‘Happiness is not by chance. Happiness is by choice.’ He reads it every morning to help face the day as he now lives alone. God works mightily through even small acts done in Love.”

The hope spread by the youth in Voorhees has apparently been contagious, as Hope Church welcomes people from 12 different states as far away as Naples, Italy, each week online.

“We have re-envisioned what the future looks like,” said Mandala who added that they will continue to worship online through the end of the year. “Every other week we have someone new.”

Also continuing at the church is curbside distribution of food from their food pantry in Voorhees, family ministries like “Kids Konnect, online resources for its Tomorrow’s Hope Preschool and virtual small groups.

To learn more about Hope Church, including other ministries like Hope Cares, Alpha and addiction recovery support groups, visit www.meethope.org/.

Bringing the Power Back to Small Voices in Jersey City

The origins of vacation bible school can be traced back to Hopedale, IL, when in 1894 a Sunday school and public schoolteacher named D. T. Miles started a daily Bible school to teach children during the summer. Four years later the “Everyday Bible School” was organized by the New York City’s Epiphany Baptist Church where Eliza Hawes, the church’s youth director, sought to provide religious activities during the summer for the large number of immigrant children living in the East Side tenements. The VBS was held at a rented beer parlor to accommodate those children.

Today, a VBS can be found in many churches in Greater New Jersey, most likely not in a beer parlor but likely still with plenty of crafts, snacks, games and smiles as congregations do their best to keep children connected to their community and God in the summer months. In 2020, VBS took on new meaning as children and churches faced the realities of COVID-19.

“They are brave, but they are afraid of what will happen in the future,” said Roeline Ramirez, the  Christian Education Chairperson of Trinity UMC in Jersey City who hosted a virtual VBS in August with music, stories, poetry and guitar. “We wanted them to know that it will be okay because God will empower you.”

The VBS 2020 theme was “Empowered Generation.” During the five days in August, the children ranging in age from one to 13 from Trinity UMC along with First Filipino-American UMC, Ridgefield Park UMC, Ignite UMC and some UMC and non-UMC churches in New York City, Maryland, Philadelphia and in the Philippines, joined together to learn more about God.

“God can empower them into becoming strong believers of Jesus Christ, especially in the midst of the current world pandemic,” said Ramirez who is a strong believer of following God’s lead and “listening to small voices.”

In 2014 Ramirez, who was living in her native country of the Philippines with her husband and two children, listened to the small voice of her daughter, Amara (with the middle name of Giop) who had been telling her nursery schoolteacher that she was moving to America. After some extensive research, Ramirez and her husband made the decision to take a trip to the United States. Six years later they are living in New Jersey, and in May Ramirez received a degree from the Unification Theological Seminary in New York City.

The collaborative effort to create the week-long VBS was enhanced by the donation of all the items needed by parents. These items were either delivered or put in the mail prior to the start of the VBS. Virtual certificates were mailed following the completion of the program. Lay members of Trinity UMC did the opening and closing prayers.

We pray and hope that all children will be empowered by God’s Spirit and they will become the “empowered generation” who will continue the faith in Jesus Christ that will be manifested in their life in the family, church, and community.,”

In addition to VBS, the children had registered were then treated to free basic poetry making classes and basic guitar classes via Zoom.

“It was challenging and hard for we are not experts in new technology. However, God really works in mysterious ways,” said Ramirez.

As the Trinity UMC congregation looks toward 2021, Ramirez said, they will likely do a hybrid program so that they can continue to connect to people throughout the world and include children from different faiths.

For a collection of VBS videos, including those featuring poetry and guitar classes, go to Trinity UMC’s FB page at www.facebook.com/watch/tumcjc/.