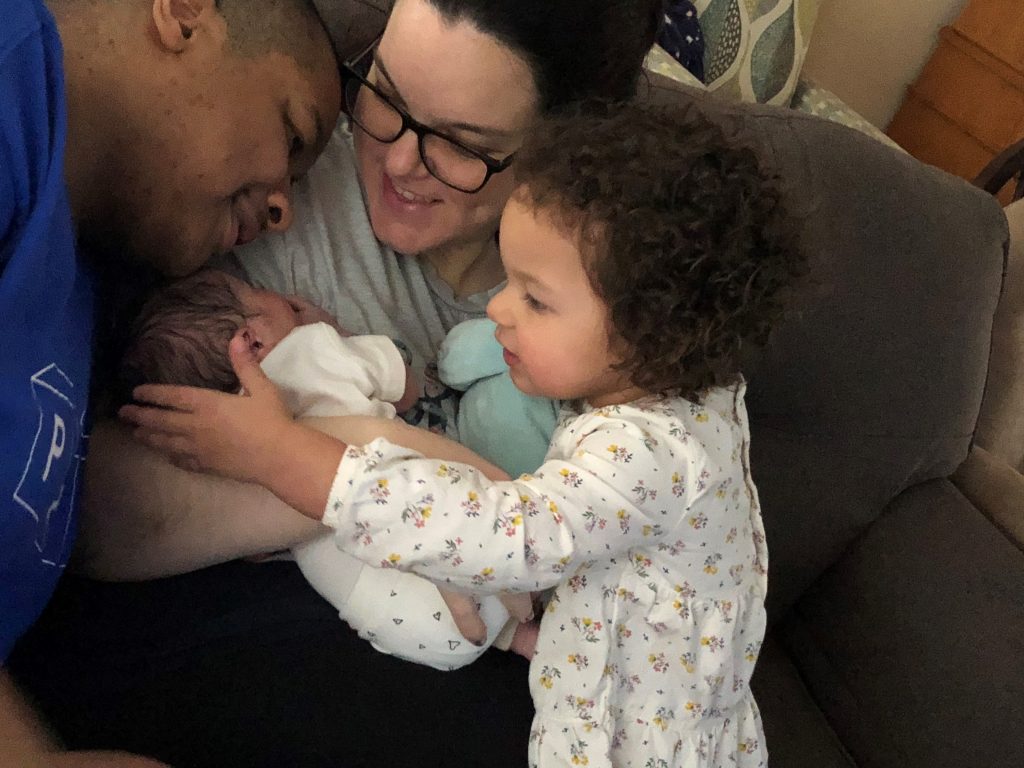 In these trying COVID-19 times, Rev. Jacqueline “Jacki” Pillot of Trinity UMC in Merchantville considers herself to be truly blessed as part of a strong church community. Pastoring during a global pandemic has proved to be no easy feat, yet Pillot has managed with both God’s grace and her supportive husband, Rev. Pedro Pillot of Fieldsboro UMC in Fieldsboro and Asbury UMC in Camden. And, throughout this past year of fear and uncertainty, this clergy couple of two young children have relied upon each other and upon Christ’s love to see them through any shadow of doubt they may have had.

“Being a pastor and a parent as well as a clergy spouse is difficult in the greatest of times so when the pandemic hit, it became even more challenging,” she said. “But once we got into the rhythm of who did this service live and who pre-recorded and when our support system could come and watch our little ones, it made it so much easier.”

Pillot, who recently gave birth to daughter, Lydia, now seven weeks old, also has a two-year-old daughter, Elba. And as the mother of two small children has learned, having a support system in place as well as understanding congregants has allowed her to parent and to pastor successfully these past 12 months.

“It helps that we have an amazing support system that has been so willing to step in and help out whenever we need. So not easy but like anything else having a routine has helped! It also helps to have congregants who were understanding of the fact that we are both pastors and parents and so in the midst of doing worship from home it can get stressful. We are so grateful to have churches who understood our need to be not only pastors in this time but also to parents. Having congregants who are willing to support our ministry not only to the church but to our family has been a huge asset and joy,” she said.

Pillot was born and raised in Chautauqua County, NY. She attended West Virginia Wesleyan College where she graduated in 2014 with a B.A. in Religious Studies and Gender Studies. She then went right to seminary at Drew University Theological School where she graduated with a M.Div. in 2017. She met her husband Pedro, while they were in seminary.

“We had the same friends’ group and had class together. We were both commuting from home to Drew and would make sure that the other got home safely from our late-night class. Our relationship evolved from there,” she said. “It is the greatest blessing that God has given either of us. We have not served at church together but in this line of work, it is hard for one of us to be appointed without the other church benefitting from the strengths we both bring. While we have not been appointed to the same church, we have talked about how interesting it would be to serve together because our strengths work well together. It would be an adventure for sure.”

Pillot is now in her second year under appointment at Trinity UMC in Merchantville, NJ. She is in her fourth year of appointed ministry.

Pillot became the pastor of Trinity UMC in July 2019. She said that the average attendance  on a normal Sunday morning is 15 to 20 people.

“I feel like as I learn and engage with the community and the members of the church, it is clear that the church has had its ebbs and flows like any other church. Our membership might not be growing, but since I started, there has definitely been more community engagement. I have done my best to provide opportunities for spiritual growth through Bible study and other opportunities to grow closer to God including at Home Worship Guides for the first few months of the pandemic as well as for Advent,” she said. “Since I got here, we have engaged in the community more. We joined the town wide yard sale, we handed out hot chocolate during the Christmas Parade and we have a thriving food pantry that gives out food once a month. We are trying to be more involved in the community at large and we are doing really well with finding the events that we could plug right into but with the pandemic it has not been easy.”

The life of ministry is indeed a family affair for Pillot. Her husband, Pedro leads worship in both Spanish and English at his two churches. Her father-in-law, Benny Pillot, who passed away two and a half years ago, was also a pastor for most of his adult life. He started his ministry in Puerto Rico where he had a church in Patillas, PR called el Santuario. And her mother, Carolyn Stow, is an elder in the Upper New York Annual Conference of the United Methodist Church where she has served rural and urban churches.

When asked what has been her greatest joy as a pastor, Pillot said that baptizing babies and watching little ones grow in their love of neighbor and love of God.

“I also enjoy being able to get to know people from all walks of life who are trying to grow in a relationship with God and with each other. Pedro and I have pastored successfully over the past year by the grace of God and the support of our families and our churches. Pedro would tell you that he has tried to teach his congregants the art of being together even if we can’t BE together. He says he has worked to impress upon them with the aid of Paul who says, ‘I wish that I could be with you in person but I am there with you in spirit,’” she said.

And with all the trials and tribulations that this past year has brought, Pillot firmly believes that God has blessed her to be “a pastor mama” and wouldn’t trade her callings “for anything in life.”

“I love being a mom and a pastor,” she said. “I can’t imagine doing anything other than what I am doing. I am so grateful that God has called me into both of these roles in life.”