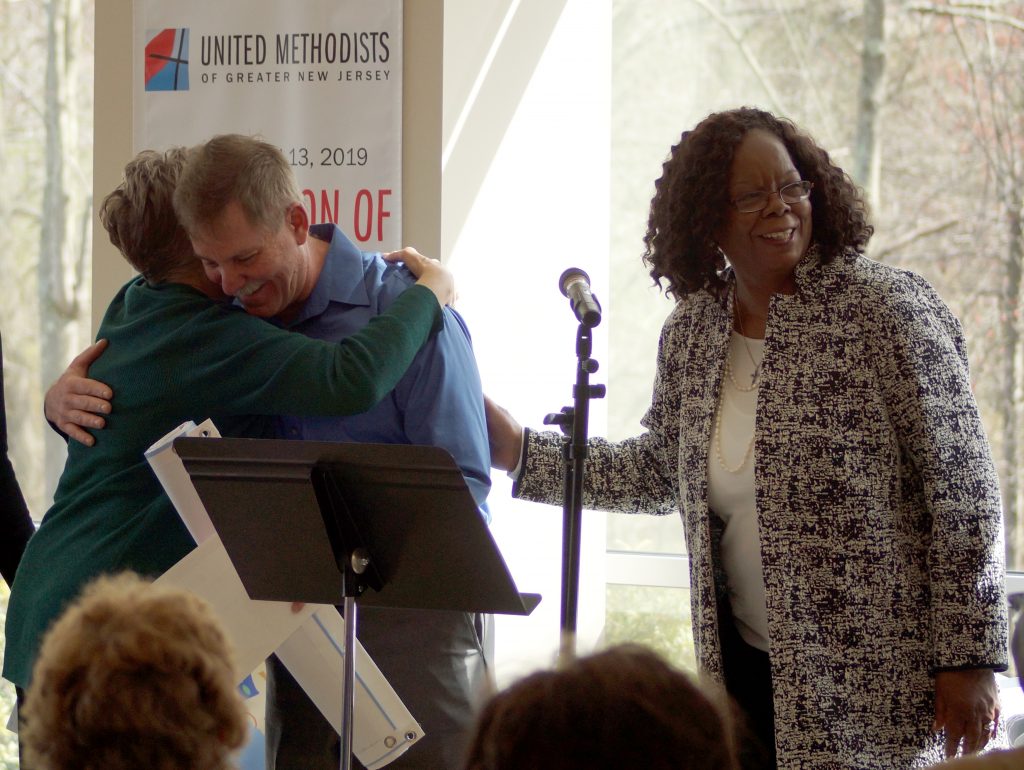 For 10 years as  GNJ’s Conference Lay Leader, Rosa Williams has been empowering and leading laity to help them serve in partnership with clergy in the local church. She has been instrumental in creating programs that were vehicles for their growth and transformation, all the while with a peaceful, determined nature that she has being guided by God.

“It has really been a journey. Every time God is always there,” said Williams who is a member of Galilee UMC in Englewood and has passed the torch to Judy Colorado who was elected Conference Lay Leader at Annual Conference in October.

“It was a call that came at such a time as this when I can share my gifts. God has put me in the capacities and has prepared me for this new role,” said Colorado who also serves on the board of GNJ’s Council of Finance & Administration, contributed to the new A Journey of Hope and is chief nursing officer/vice president for patient care services for RWJBarnabas Health-Monmouth Medical Center Southern Campus in New Jersey.

Williams has prepared the way for Colorado to take over by laying  a strong foundation of laity leadership over the past decade. In 2009 she was instrumental in creating the Laity Leadership Academy to equip laity with tools for ministry, which this year has been transformed into the Leadership Academy to accommodate both laity and clergy.

She also created the Lay Ministry Recognition Awards to recognize outstanding ministry. The awards honor creativity and innovation in transforming lives and making disciples of Jesus Christ. Among many other accomplishments, she was an instrumental part of the team who joined the NAACP, the Latino Action Network and others in a lawsuit that asked that State of New Jersey to take action to desegregate New Jersey public schools.

“It’s amazing what people can do and how intentional they can be,” said Williams. “God is pushing them, and when we equip them with the right tools, how many people they can pull with them. We need to keep encouraging them to do great things.”

Williams noted that both her mother and great grandmother were Methodist. She has carried what she learned during those developmental years with her in every step of her journey, looking toward God to give her guidance.

She recalled how each role she had led to the next one from the president of the Palisades District United Methodist Women to the District Lay Leader to Conference Lay Leader.

“I’m waiting for my next assignment from God,” said Williams, who is confident in the future, . “Judy is a great leader and will do a great job, I have no doubt.”

Colorado learned how to be a leader as a child while watching her grandmother be a strong civic leader in her community in the Philippines where she grew up.

“She always gave everything she had, and early on I saw that there were people in need,” said Colorado who recalled how prior to the opening of a clinic in her community, her grandmother opened up the family room of her house to patients who needed help.

Colorado emigrated to the United States in 1989, with her first job as a registered nurse at Methodist Hospital in Brooklyn. Her husband, Joseph, who is also a Filipino immigrant, realized after studying in college to be an accountant, his real calling was also to be a nurse. Together, they have three children and a passion to help others.

She sees both her secular and non-secular roles as intertwined: “It’s no longer a job. It’s my higher calling to help others learn and grow. God has been sustaining me all along.”

She has taken on many roles in the United Methodist Church, including district lay leader for Gateway North, chair of the Committee on Ethnic Local Church Concerns, a member of both the Laity Board and Connectional Team and a board member for the United Methodist Communities, but she said, “Along the way I learned to calm myself to be an empty vessel to be filled.”

Her hard work in creating better work environments and shaping the futures of fellow nurses has not gone unrecognized. She was one of 13 honorees by the New Jersey Institute for Nursing on its 2019 Divas and Dons Awards for her innovative work on redesign of patient care delivery model that achieved organizational turn around on patient and staff engagement and operational efficiencies.

Also in 2019, Colorado was one of 21 nurses honored by the Nurses with Global Impact on its third International Nurses Day celebration at The United Nations for her work in community engagement with social impact and mission at work in nursing.

As she enters her new role as Conference Lay Leader, Colorado said she hopes to listen, learn and assimilate for the first six months so that she can best align all efforts and work together. Her lifelong heart for mission and faith in God will be the vehicle on which what she learns will grow and thrive.

“Laity need to be courageous more than ever before. I hope I can bring encouragement and inspiration to them and most of all, let them know they are not alone.”

“Laity are a vital part of any United Methodist Church. They lead people to the love and grace of Jesus Christ and to serve the world. Rosa was that leader, and I’m grateful for her 10 years of service and the transformation she brought GNJ. I’m looking forward to see how Judy will bring her vast talents and passion for mission to this vital role.”