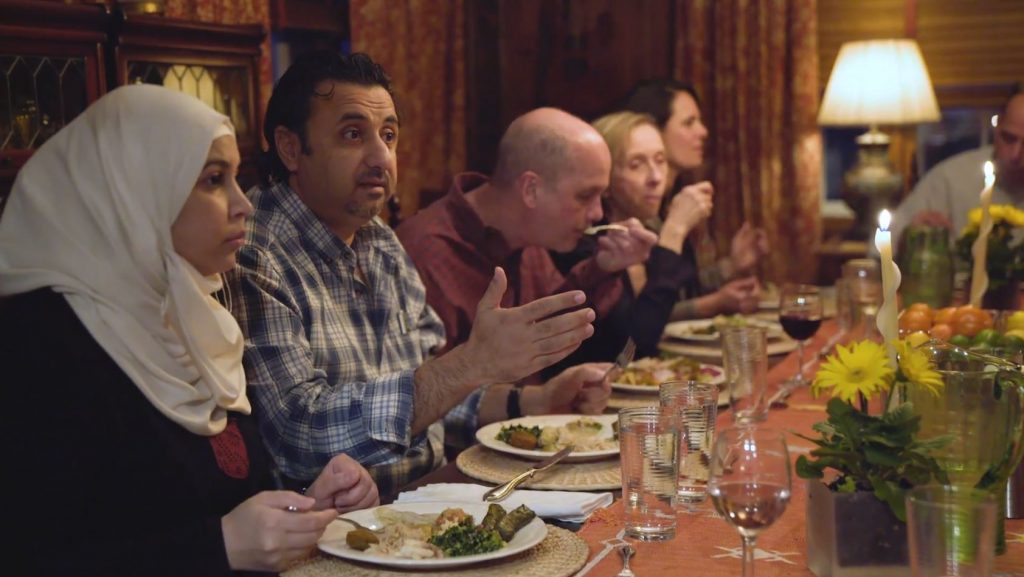 Abdul Alargha and his wife Rana share their story of fleeing war-torn Syria for refuge and a second chance at life in the U.S. at a Syrian Supper Club meal hosted by members of Morrow Memorial UMC in Maplewood. Photo by James Lee

MAPLEWOOD – Guests packed the intimate dining room inside the Farfan’s home in Maplewood, N.J., Morrow Memorial United Methodist Church members were hosting their first Syrian Supper Club with their friend Abdul Alargha who sat at the head of the table beaming, welcoming each guest, shaking hands, and introducing himself. With a quiet sigh, the once successful Damascus businessman turned refugee, and now asylum recipient, leaned back in his chair, gently clasping his wife’s shoulder. No longer destitute on the streets of Manhattan, Alargha was secure and settled in the welcoming embrace of New Jersey United Methodists who defied societal predispositions, fearful skepticism and political authorities to radically live the love of Jesus.

“We used to call this kind of relation in Arabic, is like brother but not from my mother,” said a smiling Alargha, describing his close friendships with the church members.

The Supper Club brings Syrians and their friends in the community together twice a month for a delicious meal cooked by Syrian women who earn money from tickets sold. After the meal, Alargha shared his story of escape from Syria and his separation from his family. In 2012, his various companies were closed by the Assad regime after they were deemed “threats.” Among them was a charitable organization in support of widows from the government’s brutal crackdown on widespread dissent. After security forces forcefully entered his workplaces and home, Alargha flew to New York on a business visa with $400 and a laptop.

“I remember waking up in-flight thinking, ‘what am I doing on this plane? Where am I going to go?’” he exclaimed. Hours prior, he was a prosperous entrepreneur with a beautiful house and hundreds of employees. Meanwhile, his wife Rana and three children spent a year and a half on the run, stealthily hiding from the regime’s authorities. When missiles rained down from the sky, Rana would shelter her children by saying they were fireworks and special effects for the filming of a movie.

In 2015, Alargha was granted political asylum in the U.S. with the help of several attorneys. The next day he began the process to retrieve his family.

Morrow Church was at the ready to help him with this process. The church worked with First Friends of New York and New Jersey, a refugee support agency, to facilitate the family’s settlement and adjustment process. The people of Morrow Church helped the Alargha’s find an apartment in Montclair where they could embrace the future.

“I kneeled on the ground and took my wife’s hand and held my kids’ legs when they arrived at JFK airport,” he said. “Sometimes I wake up at night and ask myself, ‘are they really here or is this some kind of imagination?’”

Alargha says the United Methodists are his main supporters who have been “like a solid wall” against his back.

“Everything we have is because of their support and we’re so grateful.”

After the Morrow Church had come to his assistance, Alargha returned the embrace by addressing the congregation during a worship service about his experiences as a refugee and joined youth from the church on a weekend trip to Washington, D.C. to meet with state legislators about immigration policies.

Employment remains the prime challenge for Syrian refugees including Alargha, who has taken on part-time work while he searches for a more stable job.

For Alargha, it’s enough for him that there are people who have a will to help.

“Even if they don’t help, just because they have this will, this is more than enough,” he stated. “As Jesus said, ‘break bread.’ I believe these United Methodists I have met represent Jesus Himself. We found open arms here. I can tell you, frankly and honestly, what I have received from this church for me is like I have received it from Jesus Himself.”

This story was published in the July/August 2017 issue of The Interpreter, the magazine of The United Methodist Church. You can find out more, subscribe, or view the story here.