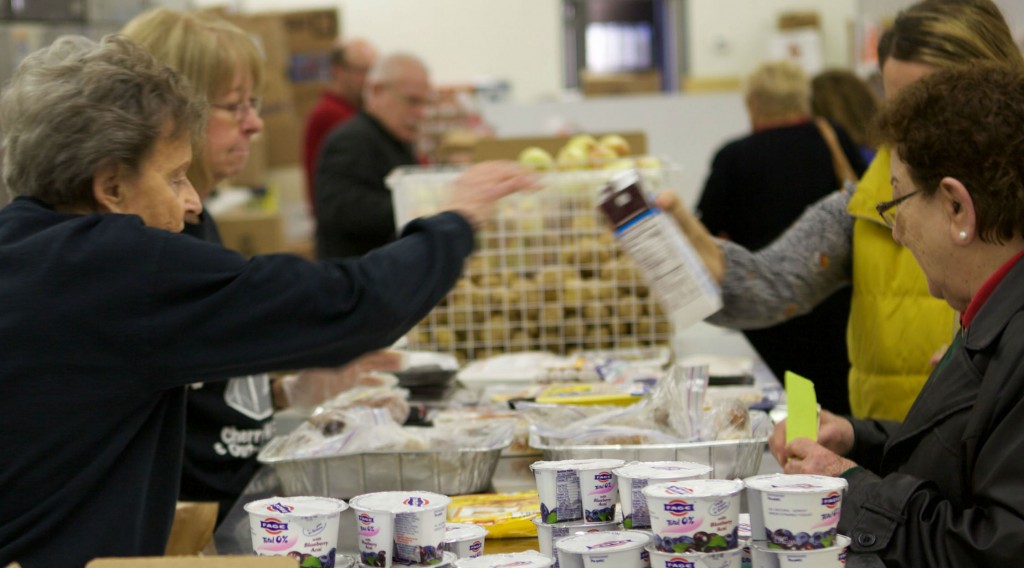 CHERRY HILL – They come with little or no money and sometimes with an empty stomach, too. Then they leave with a grocery cart of food and a heart filled with appreciation.

That’s been the mission of the Cherry Hill Food Pantry, which was co-founded by St. Andrews UMC in Cherry Hill, since it started in 2007. The pantry has grown from a small room in a church basement to a recently opened store front in a shopping center. The pantry is open twice a week, receives between 70 and 80 people each time it is open and has 900 families registered in its database.

“This is my fourth trip here and it has been so helpful,” said a woman named Abigail, who is retired and lives on a fixed income. “I’m on social security and sometimes my money runs out before the month does. They have been wonderful to me here.”

The families are allowed to come in once a month and each family representative is checked in by computer before being helped along by a volunteer to pick out the food.

“If we didn’t have this, I don’t how we would eat sometimes,” said another woman at the pantry in an early December visit. “Usually I use coupons when I go to another store to save money. Coupons are a big friend of mine. But this saves me probably a $100 or so.”

The pantry offers a wide range of food, including fruits, vegetables and frozen meats, as well as a large variety of non-perishable items. The food comes from the South Jersey Food Bank, Philabundance, several area supermarkets, two local restaurants and food donations from various organizations, including schools and sports teams, throughout the Cherry Hill area.

“All of the food is up to date,” said food panty board president Michael Doyle, who is a long-time member at St. Andrews. “The way we have it set up now, it kind of resembles a supermarket. Everything we have is given away.”

Doyle said there are now 13 churches of various faiths that help with the volunteer effort. The new site, located in a storefront just off the intersection of Brace Road and Haddonfield Road, includes six industrial size freezers and four regular refrigerators to keep the meats, fruits and vegetables cold. There is also a back entrance where food is delivered to a storage room where it is sorted.

“We saw this location and we went to the mayor’s office and he helped get us in here,” Doyle said.

This location did require putting in a new floor, purchasing shelves and also installing new lights. But the result was moving from a 1,900 square foot area at St. Michael’s Lutheran Church in Cherry Hill to a 4,200 square foot building. It’s quite different now than when the pantry first opened.

“We started out in a 10×10 room at Cherry Hill Baptist,” Doyle said. “We started out feeding five families and then pretty soon we were running out of food.”

While many places are willing to donate, it is the pantry’s responsibility to pick up the food. That means some volunteers have their SUVs full of food on some evenings and deliver it to the pantry. Doing the pickup as well as helping when the pantry is open can be a rewarding job.

“It’s very satisfying,” said St. Andrews member Ken Ferguson, who volunteers regularly. “I’m lucky enough that I have never been hungry. One thing I know though is that the Lord wants us to take care of people.”

Another thing that Doyle and other volunteers have noticed is that as time goes on the need continues to grow.

“This time of year, hunger is on everyone’s minds,” said Food Panty Executive Director Janet Giordano during the first week of December. “While we appreciate everything we get, we need to remember hunger goes on all year round. Hunger doesn’t take a vacation. People are just as hungry on Aug. 1 as they are in December.”

“We’ve just kept coming as a church group over the years and it’s been great,” he said. “It’s nice to be with the people. They are always so appreciative and it feels good to give them something.”