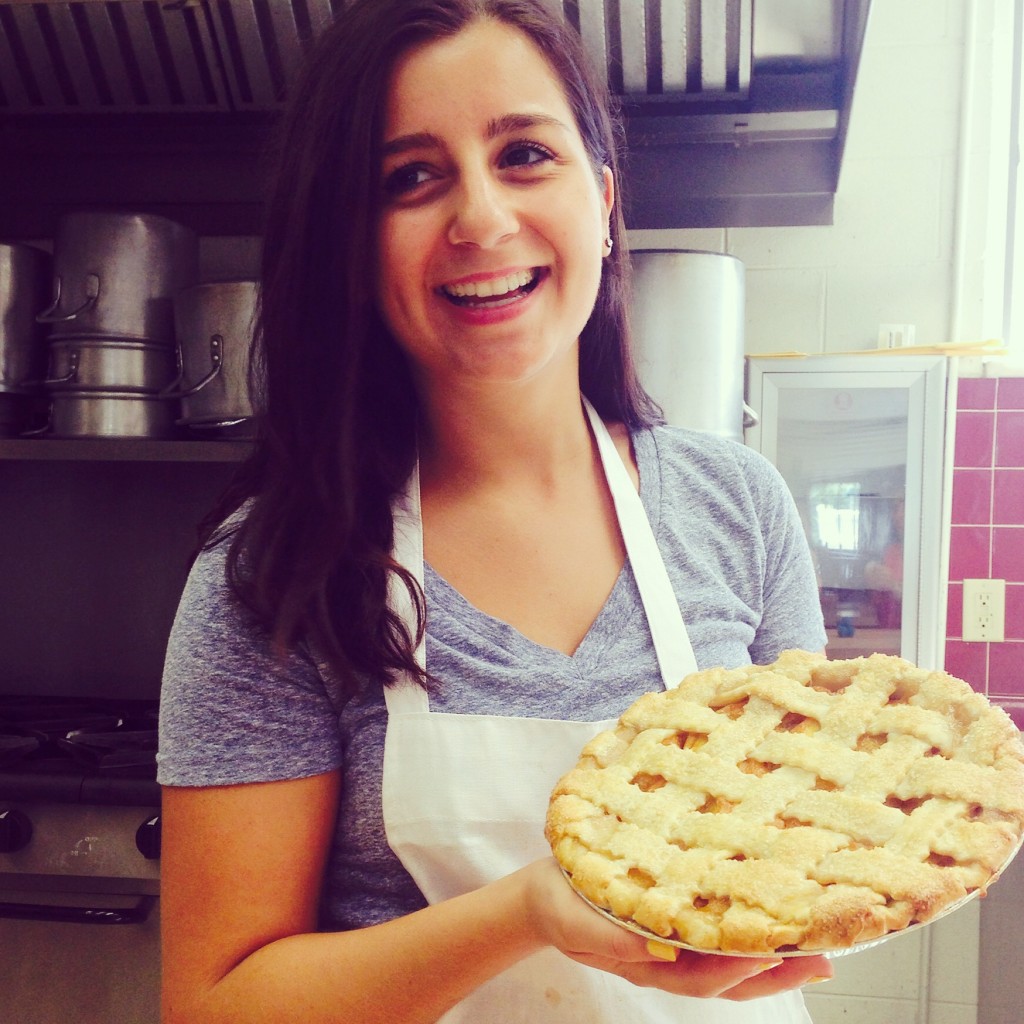 They call her the “Pie Girl.”

But behind the cute nickname and sweet pastries that Cat Gleason has made and sold is an unmistakable motivation to serve in a way that belies the sensibilities of most teenagers.Gleason, who along with her family attends St. Peter’s UMC in Ocean City, raised more than $20,000 for missions by selling her specialty pies at the Ocean City Farmer’s Market one night a week during each of the last three summers.

“All along it was not about me,” said Gleason, an Ocean City High School graduate who started school at the prestigious Culinary Institute of America in Hyde Park, N.Y., earlier this month. “It was about others and what I could do for people who needed the money.”

Gleason found her passion for helping people and pie making while volunteering at God’s Kitchen on the last Wednesday of each month at St. Peter’s.

“It is a lunch feeding program and sometimes my mom would let me skip school to help with that,” Gleason said. “I always knew how much I loved cooking and baking. I don’t remember the day, but we decided we should start selling pies. I took the two things I loved the most, helping people and baking, and put them together.”

The act of putting together the pies to sell each week was no small feat. Gleason and her family, usually her mom Karin, younger sister Grace and dad Rob, were regulars in the St. Peter’s kitchen on Mondays and Tuesdays to make enough pies to sell Wednesday night. The number of pies made sometimes reached 240, but Cat Gleason said it usually was in the 200 range.

“We would bake Mondays and Tuesdays and since the help was all volunteer, you couldn’t guarantee how many people would show up,” Cat Gleason said. “Some weeks we had up to 18 people and other weeks it would just be me and my mom and dad and little sister.”
No matter how many people showed up to help each week, the Gleasons made sure there was no shortage on the variety of pies. They included blueberry, peach, apple, chocolate, peanut butter, a bacon, spinach and tomato pie with three types of cheese, a macaroni and cheese pie and a pie layered with tomatoes and bacon. Gleason’s menu also included some made in quiche or cobbler style as well.

“Some weeks we would make too many because there wouldn’t be a lot of people at the market,” Cat Gleason said. “It was always hard to tell. But the pies were never just thrown out. They were given to someone, or sold through the church.”

The whole pie making idea didn’t just happen in a day. While Cat Gleason knew she wanted to do something with her love for baking, she experimented before her pie making volume hit full force. After she discussed the possibility with then pastor Rev. Brian Roberts, now the Cape Atlantic District Superintendent, they decided to test the pie market one spring.

“I talked with Pastor Roberts and he really liked the idea,” Gleason said. “He said let’s give it a trial run. The first sale we had was an Easter sale and we just had three varieties of pies. But that went so well, we decided to do it in the summer.”

The Gleasons went through the steps of first being able to reserve the kitchen at St. Peter’s for the pie making days, and then through the application process to get a booth at the Farmer’s Market, which is open from mid-June until mid-September. The other part of the process that benefitted the Gleasons is that Cat’s older siblings, Liz and Thomas also would join in at times. So while the pie making was to ultimately help others, it also helped bond the Gleason family.

“Without a doubt it did that for us,” said Karin Gleason. “Monday, Tuesday and Wednesday we would be together. We spent hours and hours together. Laughing and even fighting sometimes.”

Karin Gleason said it was their daughter Liz who first drew them into attending St. Peter’s about three and a half years ago.

“She was like, hey there is this really cool church I want to try, will you come with me?” Karin Gleason said. “When your teenager says something like that, you don’t say no to it.”

While that decision certainly influenced the Gleasons’ lives in many ways, just what it will mean for the long-term is impossible to measure. That’s because one day Cat Gleason hopes to have her own restaurant as well as a soup kitchen to help feed those in need.