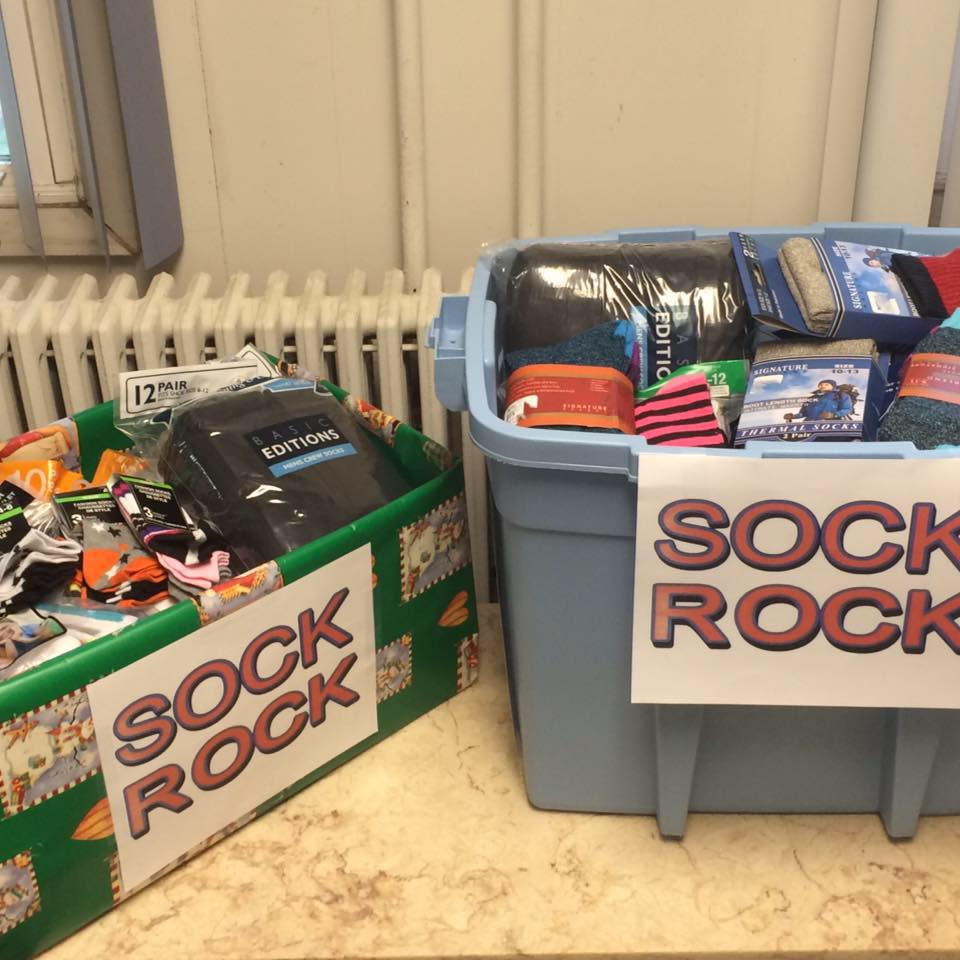 As Pastor Keith Roller of the Leesburg and Delmont United Methodist Churches in Southwest Cumberland County looked at his and his wife Bonnie’s living room and dining room recently, he was witness to an unusual but heartwarming sight – two rooms overflowing with socks of all shapes, sizes and colors. To any bystander, what might appear to be just a large collection of socks is actually a mission of love for this united couple who began their quest three years ago to help the less fortunate receive this least donated but most needed item.

“When people think about donating clothing, they generally go through their closet and pick out items which they no longer wear, are out of style or doesn’t fit. It often doesn’t cost them anything to do that. They generally wear their socks until they wear out or lose one of the pair. If they did donate them it would be akin to donating used underwear so need I say more? We have encouraged folks to physically go out and buy new socks for those in need. It really makes a difference to the people that receive them,” said Roller, who is also a practicing attorney and sole practitioner at Keith C. Roller, Esquire, P.C.

Dubbed “Sock Rock,” the annual event begins November 1 and runs well into the New Year. During this time, new socks are collected at various locations in three southern counties – Cumberland, Atlantic and Cape May. This year, sock “bins” were located in 22 different churches and businesses in the tri-county area. Roller and his wife designed and then provided “Sock Rock” posters and flyers to all the locations that had bins. They also placed posters and flyers listing the business and church locations in various locations in the three counties.

Roller added that “Sock Rock” is a faith-based organization dedicated to providing new socks, the most needed and least donated item, to the homeless and the less fortunate.

“The first socks were received this year from the Central Cluster of United Methodist Churches where I delivered the message at their annual Thanksgiving Eve service on November 23, 2016. We received nearly 1,000 pairs of socks from 11 churches that night,” he said. “We received approximately 300 more from the churches before Christmas. Just before Christmas I contacted and collected the socks from the businesses that participated in the event. The business bins collected almost 1,200 pairs. My wife and I then distribute the socks in the New Year to different locations that care for those experiencing homelessness and living in the margins of society in those same three counties,” he said

Roller continued, “This year we will deliver socks to Cumberland County Family Shelter and Trinity UMC in Cumberland County, The Atlantic City Rescue Mission, Covenant House in Atlantic County and ‘The Branches’ and ‘Family Promise’ in Cape May County. We are always open to suggestions to other delivery sites in the tri-county area.”

Cape Atlantic District Superintendent, Rev. Brian Roberts, said that he is excited about the difference this ministry makes; providing for people’s soles and souls.

“It conveys to those receiving the socks that people care and are caring for their souls. It is a simple idea that is making a mountain, literally of socks. Almost everyone can participate. Congregations and organizations quickly capture the vision and are energized as they see the mountain of socks to give away grow,” said Roberts. “It is a creative idea, much like the idea of filling a shoe box with gifts for children at Christmas.”

Roller said he was inspired by the Holy Spirit to do this for the first time in 2014 and he and his wife have done it each successive year in 2015 and 2016.

“This year was our third annual event. We collected 500 pairs the first year, 1,500 pairs the second year and 2,500 this year. I give God all the glory for inspiring me to start this ‘make a difference’ kind of event,” Roller exclaimed. He added, “My wife has helped me to make it all possible ever since. The sight of all those socks piled high in boxes and bags at the Thanksgiving Eve service brought tears of joy to the eyes of both us. We sincerely hope and pray that they will continue to be a part of ‘Sock Rock’ for many years to come.”

When asked what his hopes are for the 2017 “Sock Rock” event, Roller replied, “It’s too hard to think about that at this point in time. We are still so overwhelmed with this year’s response. All we can hope for is continued growth in the future as the Spirit leads us. Our goal is to one day hear that socks are no longer the most needed and least donated item. We truly believe that the body of Christ led by the power of the Holy Spirit can make that happen one day. Our God is an awesome God!”