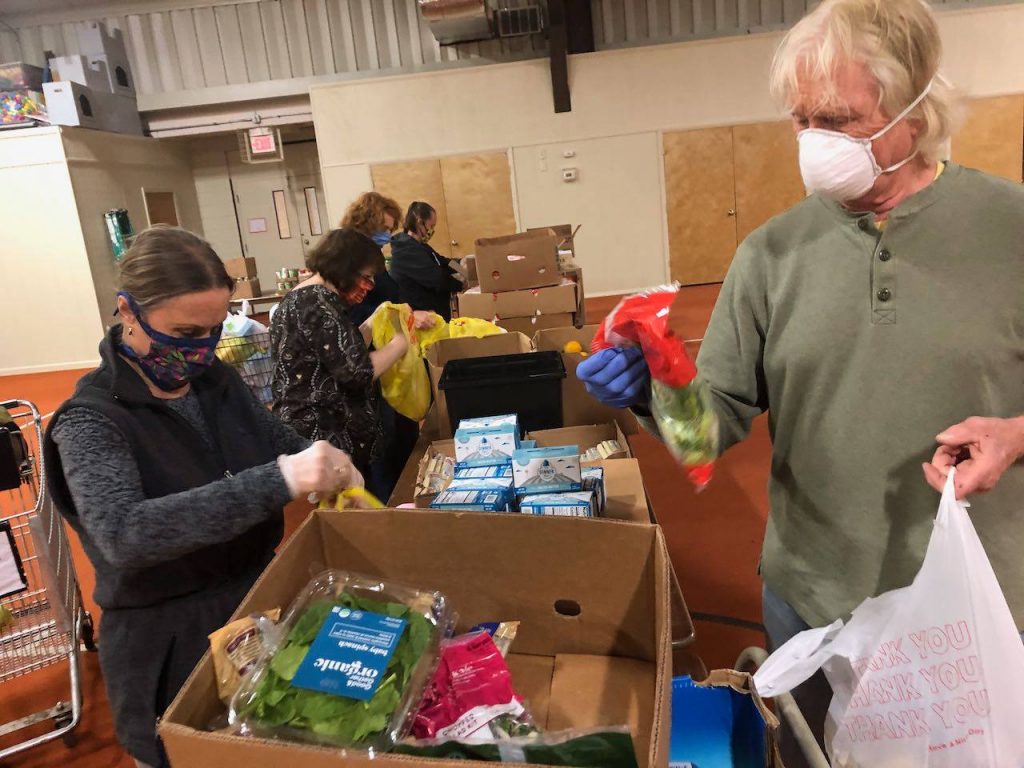 It’s five o’clock in the evening on Thursday, and amid all the plastic bags filled with pasta, sauce, canned vegetables, cereal, produce, eggs, meats, breads and a toiletry or two and the two banners welcoming both guests and donors, a line is forming, some people arriving by bus or car, others on foot. One man who was laid off from his construction job stands with his son. An elderly woman leans against her walker. A girl in flip-flops wearing a backpack looks eager to get to the front of the line.

Instead of arranging flowers as she has done for decades at a florist shop she owns with her husband, Gail Bechtoldt is working together with other members of St. John’s UMC of Hazlet to get ready to hand out pounds of food to the 85-100 families who now visit their food pantry. It’s the only one in town.

“We want them to eat like we do. We want them to know that someone cares,” said Bechtoldt who estimated that they are now feeding about 700 people on average every Thursday at 5:30-7 p.m.

She added that each night she and about eight other church members greet people who are diverse in ethnicity, language, faith and socioeconomic status.

“Some people are homeless who come to our pantry. Others come to collect food for someone else. We see all walks of life,” said Bechtoldt who added that printed materials they hand out are in two to three languages so that the language barrier does not impede the mission.

Bechtoldt added that St. John’s efforts has been a work in progress, deciding years ago that more needed to be done to help others.

“We said if we’re going to survive, we have to be a missional church and care for others.” Bechtoldt has been a member since 1961, serving in various capacities like lay leader, certified lay preacher and youth ministry leader.

The people of St. John’s have taken that aspiration and turned it into a reality over the years, forming a separate 501 (c) 3 that started the Jersey Shore Workcamp to repair homes in the area and a food pantry that three years ago fed about 15-20 families.

The people of St. John’s, led by Pastor Clark Lynn Callender, have also opened a thrift store and a community garden that they hope to build on in the next several months.

“We want to do whatever we can to help them,” Bechtoldt said. With masked faces and gloved hands, she and her daughter, Karrie Johnson who runs the church’s Sunday School, are often seen waving and giving heart signs to the people who come to them for help while her grandson sanitizes the carts.

Johnson has started to involve her students in the ministry by organizing food drives with the children and packing bags.

Now with so many people arriving in the church parking lot on one night, the need to supplement their supplies is magnified. Donations arrive each week from two local bagel stores, Costco in Marlboro, Target and the Shop Rite in Middletown as well as the Fulfill food bank in Neptune.

But sometimes that’s still not enough, so the volunteers have been seen rushing to local stores to pick up more supplies or accepting generous donations of food like pasta and sauce from local residents.

The pantry is located in the rear of the church at 2000 Florence Avenue. If you would like to donate food, the church accepts donations on weekdays in the rear drop-off, between 6 a.m. and 4 p.m.

For more information, visit www.stjohnsumchazlet.org/ or the church’s Facebook page.