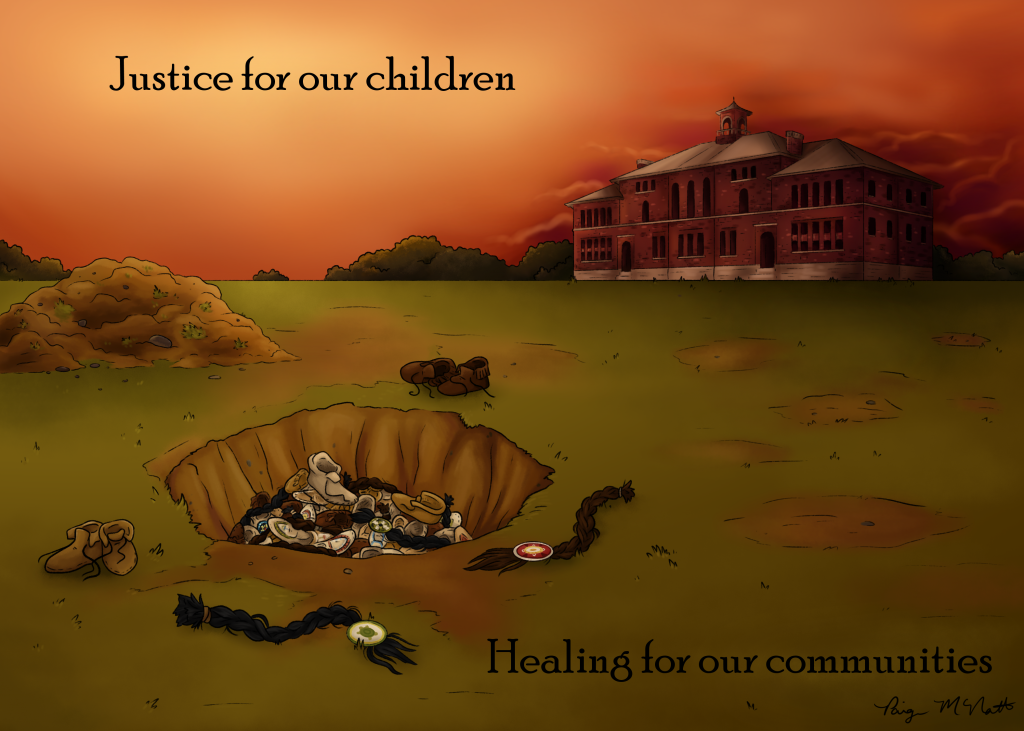 It is said that in the Native American culture, the natural world is sacred in both life and death. To harm a place of this sanctity, like a burial ground, would crush their beliefs. At a Native American ceremony, sounds of a steady rhythm played on a hand drum are heard, rocks are formed as a medicine wheel to honor the life, the smell of sage bundles burning wafts the air, and a willow branch or rosemary is laid sometimes with a ribbon tied to it for prayer. The word loss is never used, but rather it is often said, “He is not lost. We know right where he is.”

On August 13, the property of St. John UMC in Bridgeton, GNJ’s only Native American church, incurred thousands of dollars of damage to its property due to vandalism overnight–flag poles were pulled down, memorial garden flower boxes torn apart, a new memorial stone honoring veterans pushed over and grave markers in their sacred cemetery damaged. This reckless act in a small city plagued by gang violence and poverty caused fear among the congregation and community and more heartache in the wake of the recent death of their pastor, Rev. Roy Bundy.

St. John, which celebrates its 180th anniversary this month, is one of the city’s historic sites having been designated one in 2017. This should be a time of celebration in a sanctuary filled with memories and artifacts that speak to its long history of tradition, respect for their ancestors and a commitment to its community. It should also be a time when they take a bold look toward the future, but this recent act of violence has opened wounds that are many layers deep.

It also followed news that surfaced several months earlier of the bones of hundreds of children found near boarding schools across North America, uncovering the truth once again that between 1869 and the 1960s, hundreds of thousands of Native American children were removed from their homes and families and placed in boarding schools operated by churches and the federal government to “Americanize” them.

“We pray for the lost souls who feel it is okay to attack our Native American church, which means they have also chosen to attack our people,” members of the Native American International Caucus (NAIC) said in a statement. “Elders are afraid to visit the graves of their loved ones. Neighbors are nervous and have a right to feel frightened. But we will fight back. We will not be made invisible ever again. We are a people who honor our ancestors. We continue to seek their wisdom even after they have walked from this place to place beyond.”

Following the act of violence in Bridgeton, a letter from Bishop Schol and District Superintendent Glenn Conaway, called for prayer and compassion: “Throughout the pandemic, St. John UMC has been a source of hope and healing as each week they give food and clothing to more than 300 families. Many in the community of different ages, races and church affiliations have partnered with them to be a beacon of light. It is this congregation and tribe that have been invited into the local schools to share Native American history, customs and even their faith story.”

Our hearts go out to the congregation of St. John UMC and to our Native American family that has lived peacefully in this area for so many generations only to still find themselves victims of hate and vandalism.”

Rev. Conaway preached at the church on Sept. 19 to show his support and compassion for the congregation.

St. John was founded in 1841 by the Pierce brothers following the Indian Removal Act that was enacted in 1830 during Andrew Jackson’s presidency. The legislation required the Nanticoke Lenni Lenape to relocate.

“Many of the Lenape were pushed off their land by colonizers prior to Andrew Jackson’s formal mandate. Some of our ancestors moved from their ancestral land and began the long walk on one of the routes to Oklahoma territory,” said Cynthia Mosley, St. John’s lay leader, NAIC member and chair of the GNJ Committee on Native American Ministries.

Mosley, also a Lenape tribal member, added, “Others decided to stay on the land in Southern New Jersey and Delaware and hide in plain sight. Initially the most common way to avoid confrontation was to assimilate. Some Lenape assimilated with white communities while others joined Black communities. The church was safe from government interference according to the country’s new Constitution, and the church grew to be the center of religious and social life for Tribal families. They traded goods with each other at church. You met your wife, your husband at church. Old newspapers tell us of upcoming ‘ice cream socials’ at the church. The church was packed, standing room only from Friday night to Sunday evening. Those days were good in some ways because they drew us closer to each other. We hid in plain sight like this until the late 1950s. Civil rights affected us too, and we hid less and less over the years.”

But today, there are times when we feel invisible. Hiding is by choice; being invisible is something imposed on us.”

A Call for More Healing on October 6

In 1893, Congress allowed the Bureau of Indian Affairs to withhold food rations and supplies from parents or guardians who refused to enroll and keep their children in the boarding schools where abuse and poor medical services were rampant. Some families hid their children to avoid capture, and some children ran away from the schools.

In its letter following the boarding school news, the NAIC wrote, “How many more lost lives are needed before Native Americans are made visible? As the bones of the 215 children, some as young as three, found in a common grave at the Kamloops Indian Residential School in Canada are collected; the tally of missing and murdered girls, which is already 10 times the average, grows; and the echoes of historical trauma reverberate throughout Native American communities in North America, the call to address the horror of abuse against Native Americans is once again brought to the forefront.”

This unresolved historical trauma associated with the cultural genocide and years of stripping Native Americans of their culture, land and language so that the Indigenous boys and girls would become “Americanized” has wreaked havoc on Native American families. The stereotypes of the compliant, noble savage or violent aggressor have become entrenched in our culture.

From addictions and domestic abuse to suicide and mental illness, insufficient reparations have taken their toll on Native American communities for generations despite efforts from others in the community to emphasize that you are not what happened to you. The pull from the past has proven to be much stronger in far too many cases.

As the Native American community once again recovers from a trauma and bridles the energy to move forward, the community is now looking toward October 6, the day the Boarding School Healing Project and the NAIC have called for a Day of Truth and Repentance for Our Children.

On that day in 1879, Gen. Richard Pratt took children from First Nations and opened the boarding school in Carlisle, PA. This action set off a radical movement that tore families apart, resulted in early deaths for many children and caused the historical trauma that still exists today.

“These concrete acts will begin healing, justice and reconciliation for families and communities to start healing,” said Ragghi Rain Calentine, chairperson of NAIC and member of the Indian Mission UMC in Millsboro, DE.

“Indian Boarding Schools forcibly silenced our children. Let us break the silence as our children speak the truth once again. They are honored with respect and love they did not receive from the Christians of the time.”

It is hoped that by recognizing this day, more awareness will come to the surface along with a rebirth of a culture long suppressed. The groups are encouraging others to create awareness by holding an event to remember those tribal children and to remember that another death happened, a spiritual death, for many children who had their culture and spirituality taken from them.

From collecting old shoes or moccasins to represent the children to wearing orange to represent both the sun as it sets and rises and domestic violence awareness to gathering a drum group and making birds that represent the spirits of children as they take flight, the groups are asking for the day of recognition with hopes it will start the healing process.

“We need to create a place where our children can thrive, live peacefully,” said Rev. Chebon Kernell, an ordained elder in the Oklahoma Indian Missionary Conference and executive director of the Native American Comprehensive Plan. “We have our own ideas, thoughts and plans. They are in the stories of my grandmother. They need to be heard.”

More ideas for October 6 can be found at the FB page for “Justice for Our Children: Healing for Our Communities.”

“The school is in the background with the children’s moccasins and shorn braids being buried with the truth in the foreground. I wanted to have dark, looming clouds in the sky behind the school to convey the darkness and pain that it represents. I chose to have “justice for our children” behind a yellow, more hopeful part of the sky. On the grass, there are brown spots to show that there are many other holes where the truth of the devastation has been buried, just like the one in the foreground of the drawing.”