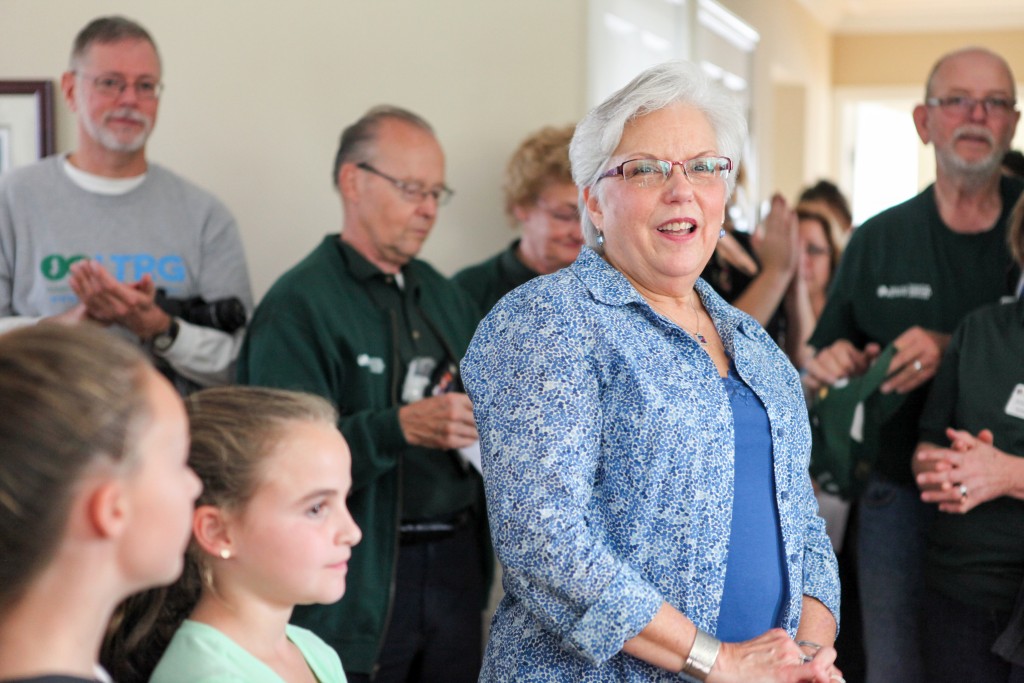 TUCKERTON – While the floods from Superstorm Sandy have long since receded, the damage from the Oct. 29, 2012 catastrophe is something thousands still face daily.

A Future With Hope, the Sandy recovery arm of the United Methodist Church of Greater New Jersey, and its partners, the Ocean County Long Term Recovery Group, Episcopal Relief and Development, and the Salvation Army had a third anniversary event to celebrate recovery and to let those still in need know they haven’t been forgotten.

“We’ve had a lot of success helping people recover and return home,” A Future With Hope Executive Director Bobbie Ridgely said. “But we know there are still thousands struggling in recovery and are here to continue helping them.”

A Future With Hope has helped by rebuilding 183 homes with more than 10,000 volunteers.  One of those rebuilt homes belongs to Tuckerton resident Jeanne DeMarsico. Her house had never flooded before Superstorm Sandy, but this time it was overtaken by nine feet of water, making her home a complete loss.

DeMarsico admitted during the celebration on Thursday at the Lighthouse Alliance Church in Tuckerton that for quite some time after the storm, she was at a complete loss on how to get help. “A Future With Hope came in and worked with me,” she said. “We sat down at a table and mapped everything out. It was worth every moment of delay, every moment of frustration, all of it. It took a lot of work and patience to make that happen.”

DeMarsico’s original home was demolished in March and she moved into her new modular home on Sept. 23. She hosted a house blessing as part of the third anniversary celebration and said having A Future With Hope and its network of skilled and caring volunteers was the biggest blessing.

Some of the volunteer groups that partner with A Future With Hope include Episcopal Relief and Development, World Renew Inc., Christian Public Service, International Relief Teams, Servants Inc., Presbyterian Disaster Assistance, Lutheran Disaster Response and United Methodist churches and groups from Greater New Jersey and around the country.

“The beauty of this experience was in all the people I met,” DeMarsico said. “The volunteers from World Renew and from all the different denominations that A Future With Hope brought in from all over were great.  Without the volunteers, this would not have been accomplished. It saved us a tremendous amount of money.

“Beyond that, volunteers came up to me and hugged me and said thank you for letting me do this. I stood back and said, you are thanking me? It was all coming from their heart to help someone come home.” The DeMarsico’s home was A Future With Hope’s first new home build and was made possible because of a partnership forged with Miller Homes to provide modular solutions to families in recovery.

Another partner in the recovery process is the New Jersey Department of Community Affairs, which provides financial resources for those in recovery. David Reiner, the DCA Deputy Commissioner of the Sandy Recovery Division, recognized the importance of partnerships at the third anniversary celebration.

“It’s really wonderful to see what all of the groups have done,” he said to the crowd of about 100 people. “It takes groups like all the people here today, like A Future With Hope and the Salvation Army.

“I want to let you know how important you are and how important of an example you are. It means a tremendous amount to those in recovery.”

Recovery would also not be possible without regular financial contributions. Major funders for A Future With Hope include the United Methodist Committee on Relief, the Hurricane Sandy NJ Relief Fund, the American Red Cross and the Robin Hood Foundation. There have also been hundreds of thousands of dollars raised by different groups, ranging from United Methodist churches, Jewish youth groups, Episcopal Disaster Recovery, local swim clubs and individuals and organizations from all around the country.

All of those donations helped A Future With Hope be named a top five Sandy recovery group by the Foundation Center, and to continue moving toward the goal of rebuilding between 300 and 500 homes with 20,000 volunteers. Salvation Army Major Betty Israel said at the anniversary event that all of the partnerships have helped lead to new avenues of recovery as well.

“Innovation happens because a lot of people out there are trying and doing different things,” she said. “Every time you hit a wall, you turn another corner and keep going. That innovation is a part of our collaboration.” Part of that collaboration comes from the political level as well.  Daniel Stampelkamp, a representative from New Jersey Senator Robert Menendez spoke at the anniversary celebration and pledged to continue to help those still in need.

“Three years after Sandy, it’s important to recognize and celebrate the progress made: families moving back home, boardwalks rebuilt, beaches replenished, roads and infrastructure repaired,” he said in a statement. “But, while New Jersey is well on its road to recovery, we cannot forget the individuals and communities left behind.  The work is not over for far too many. We need to make sure that government is responsive to the people’s needs and there to help, not make lives more difficult.”

Just how many people are in need is difficult to measure. Most reports indicate there are between 8,000 and 10,000 people who have not yet recovered.  A Monmouth University poll released on the third anniversary found that four out of 10 Sandy victims are still in the recovery process.

“We still see a lot of need,” said Keith Adams, the Sandy recovery coordinator for Episcopal Relief and Development. “We are still here to help and we want to be able to help everybody.” DeMarsico emphasized that anyone needing help in Sandy recovery should not get discouraged.

“My experience, yes it was hard and it was a long road, but I would do it again because of what I have learned and more importantly because of the good people I met,” she said. “It was a very beautiful and rewarding experience.”

CBS 3 in Philadelphia also reported on A Future With Hope’s Sandy recovery efforts. Click the links below to view news coverage.