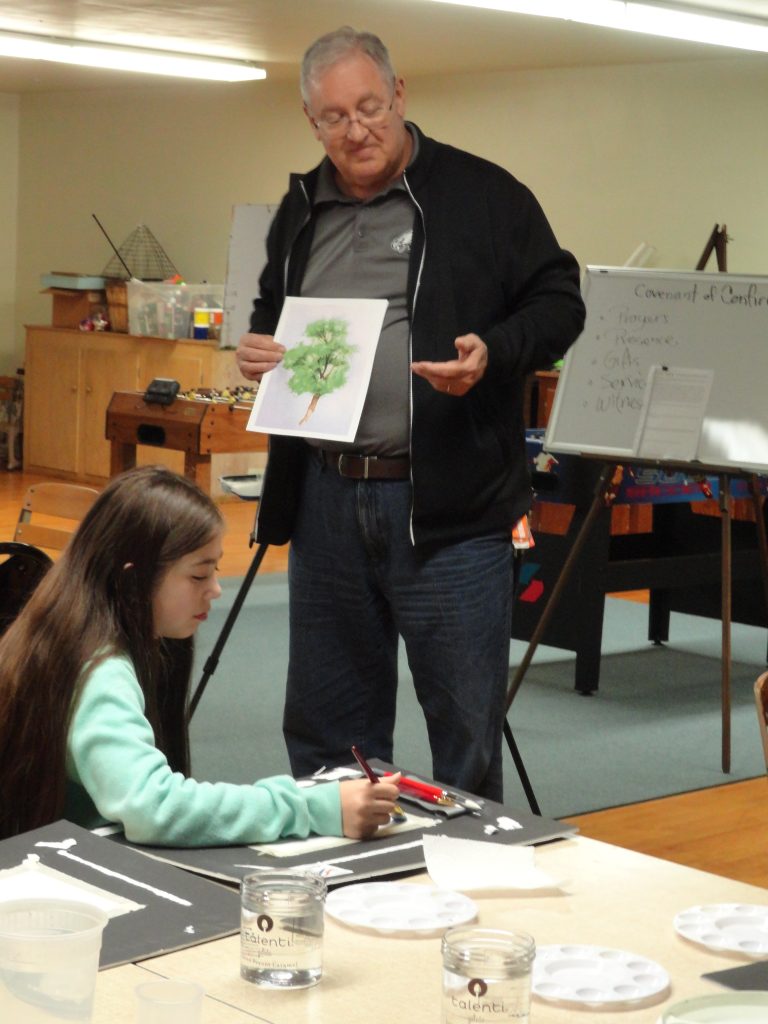 Rev. Dr. James Kim Crutchfield has taken his gift as a water color artist and turned it into a ministry for children at Broad Street UMC in Bridgeton. Photo provided

BURLINGTON- Rev. Dr. James Kim Crutchfield has served the Broad Street United Methodist Church in Burlington for the past seven years with a talent many of his congregants did not know.  He is a talented watercolor artist and recently, he decided to share his artistic abilities with his church’s youngest members.

“Art is a passion of mine and I love it!” stated Crutchfield. “I started the class originally because five children were already coming to the church while their parents practiced in the worship team which meets on Monday nights. Because they already had to be at church, my wife Stephanie, who is the worship team leader, suggested we do something to occupy the children’s time more beneficially. Parents and children were excited and several of them already wanted to learn watercolors. So I decided to have a Bible discussion and then offer sessions on watercolor painting for beginners.”

The Bible study and Water color class began in September and meets every Monday evening for an hour for young people ages nine to thirteen.  Crutchfield refers to the children as young artists. There is no fee for the class and all necessary equipment and supplies are provided including brushes, paints, palettes, water containers, water color paper and backboards.

“In the sessions we begin with a Bible discussion,” he continued. “We already discussed the two famous artists in the Bible – Bezalel and Oholiab from Exodus 31 and 35. We also looked at the brilliant artistic image recorded in Proverbs 25:11. After the Bible discussion we work on our paintings. I usually do a demonstration of a skill in watercolor painting. The children then watch and go to work on their own. Presently, the children have just completed their landscape scene of a dock on a river. They will matte their artwork and show it at the next coffee fellowship after service.”

Crutchfield said he became interested in art as a young boy, describing himself then as “of a quieter more subdued manner.”

“Mom took pity on me and every week, brought a pencil and paper so I could entertain myself… I sat next to her and drew furiously as everyone around me sang and danced and shouted. I became an artist in the Pentecostal Church,” he said. “I painted in oil and acrylics as a teen but it wasn’t until I served as the pastor of Hopewell UMC that I took a watercolor course in an adult program. Years went by as my family and I worked as missionaries. Upon returning I began enrolling in the Coastal Maine Art Workshops in Rockland and Belfast, Maine every summer. I appreciate what good teachers do to impart skill and encouragement.”

Crutchfield considers his painting class to be a ministry.  They look at scripture that have relevant lessons that speak to youth.  The selected texts raise a few questions.

“I try to get into the world of this age group and form lessons that help them process their experiences in the light of the Gospel. Because God is the Creator and has endowed human beings with creativity, I believe art is an avenue of expressing glory to God. Children should be immersed in the visual arts, painting and sculpture, music and poetry and the intuitive dimension of life,” he said. “Developing the right brain helps bring wholeness to people. Children’s brains are not just little receptacles to be crammed full of information for feedback and regurgitation. The church has a long tradition of addressing the whole person not just the rational, calculating and analyzing part of human intelligence. Watercolors tap into the right brain – the artistic, creative and intuitive dimension of our intelligence.”

When asked what he hopes the children are receiving in his ministry Crutchfield replied, “I hope that the kids will sense the fullness of life and the joy of existence Jesus brings to us. I want the children to be fully alive, full human, exercising their whole personalities. ”

For more information about the Broad Street UMC’s painting class for children contact Crutchfield at 609-949-4308 or visit www.broadstumc.org