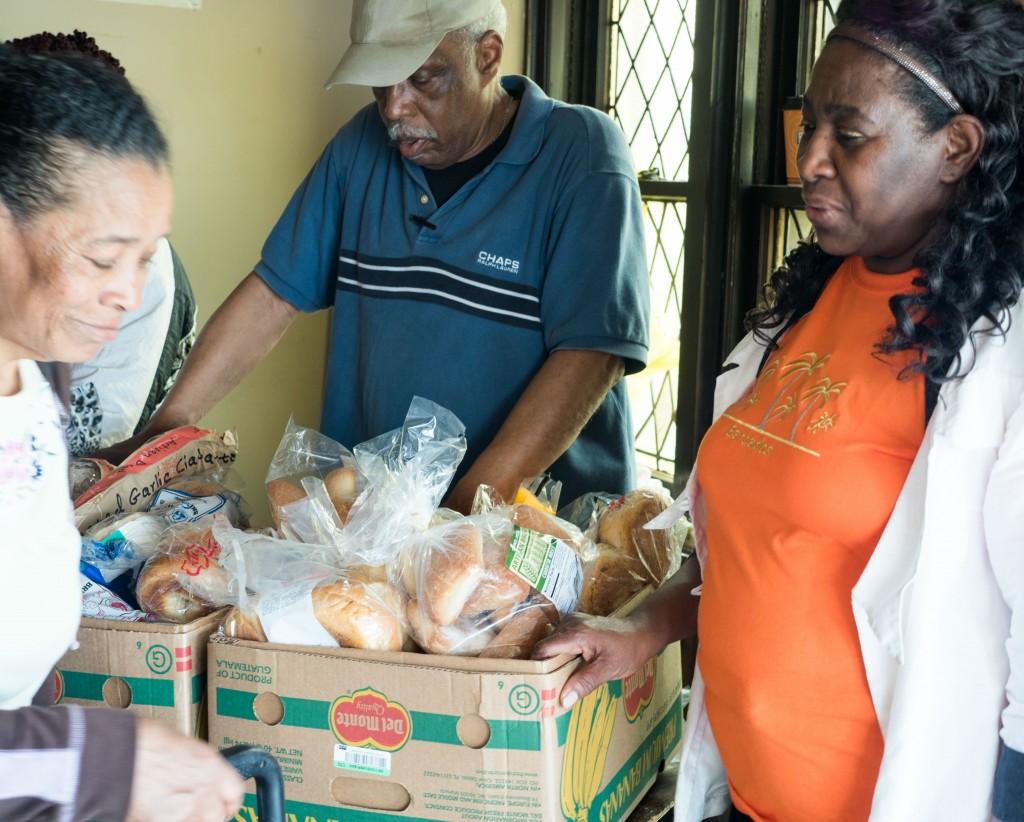 Audrey Audain got her answer to prayer. It just wasn’t exactly what she thought it would be.

Now Audain and the United Methodist Church in Orange is helping answer the prayers of the hungry by providing physical and spiritual food for 150 to 200 people each Monday at the church. They call it Manna Monday and it has been made possible due to a partnership with Table to Table, a nonprofit organization that delivers food for free.

“I had been praying that we would have a place to just get some good food,” said Audain. “Then the Lord said call Table to Table and they came out right away.”

Table to Table came and inspected the church to make sure it met its requirements. About a week later, the first truck load of food was delivered to the church. The first delivery was in July  and Manna Monday has been going strong ever since.

“A woman from their organization came here to check us out and look at everything,” Aubain said. “She said we were good to go. She asked me how soon would I like some food delivered here. I said, ‘how about on Monday?’ She said the truck would be here the next Monday and it was.”

But once the answered prayer of food arrived, Aubain realized she wasn’t finished praying. The church put a sign up to tell the neighborhood that free food was available. However, there wasn’t an organized way to distribute it.

“The first time was a little bit chaotic,” Aubain said. “People would just come and the next day we still had food left to give out. So I just prayed and asked God to give me a way to hand it out. Now we put people in chairs in three rows of three and then let them come up and get the food.”

The people needing the food don’t simply sit in the church’s fellowship hall and wait their turn. Before the food arrives, they participate in a worship service that includes music, prayer and testimony from those in attendance.

“I think it is uplifting to them to have a worship service before they get their food,” said Tieasha Lewis, a volunteer helper for Manna Monday. “They can come in here and get their spirits lifted up.”

Orange UMC Senior Pastor Prescott Butler serves communion at the service on the first Monday of each month. Those who attend say getting some spiritual nutrition is just as important as the food they receive as they leave.

“I like coming here because I can receive spiritual food,” said Edward Banks, who has started attending Sunday service at the church after coming for Manna Monday. “That kind of food keeps you full. That is food for the soul and food from the Lord. And this food helps, too.”

Banks spoke that last sentence as he got in line to pick up his variety of food for the day. There are assorted meats, vegetables, fruits, breads, desserts (sometimes even cakes) that are usually available. Aubain says there are no questions asked and there is no ID needed to pick up the food. She said the idea is to try and give out as much as possible each Monday.

While the Table to Table truck usually comes late in the morning, Aubain and her volunteer staff stay at the church throughout the day as some people cannot come to pick up the food until late in the afternoon or early in the evening. It’s the kind of dedication that makes Butler proud of his church.

“It’s no accident that this church will celebrate its 185th anniversary this year,” Butler said. “Our members understand that they are here for a reason. They love to come out and help in the feeding of the community.”

Butler also pointed out that people who attend other churches show up to help with Manna Monday, making it a true community effort.

Manna Monday wouldn’t likely be possible, or at least nearly as successful, without the efforts of Table to Table. The organization was started in 1999 as the first food rescue program in North Jersey. Its mission is to take unused food and deliver it to those in need in quick order. According to a 2012 USDA report, 40 percent of food in the U.S. is not eaten, but one out of every six people in America do not have enough to eat.

The uneaten food comes from more than 60 grocery stores, restaurants, country clubs, hospitals and other organizations. The food is delivered for free in a refrigerated truck on the day it is donated. The quick turnaround for the food is important as it is delivered within a day or two of expiration dates. The quick distribution of the food is one key element of a successful program.

“The food we get is going to expire the day we pick it up, or the next day,” said Table to Table Director of Recipient Relations and Community Affairs Julie Sciaino. “We keep a record of the temperatures for when we pick up the food and that’s something we really try to watch.”

Table to Table also makes occasional unannounced visits to all of its recipients to make sure the food is being handled the right way.

“We do pop in and check to see how they are doing,” Sciaino said. “Ninety percent of the food is gone within the first hour.”

Part of the good news is that Table to Table and its five trucks are on the road five days a week delivering food. Sciaino said they are still taking applications from groups that want to give out the food, but with 80 such places to deliver to now, they have a waiting list. And she says, Orange UMC has become a model partner.

“They have taken the program and ran with it,” Sciaino said. “It is so much fun to hear everything they have accomplished. I love to hear when a church becomes a community.”

And Aubain loves the kind of feedback she hears from the people who regularly come to each Manna Monday.

“There is a woman who comes here and she said before she started coming, she knew who God was,” Audain said. “But now she says she knows God. That’s why we are here.”