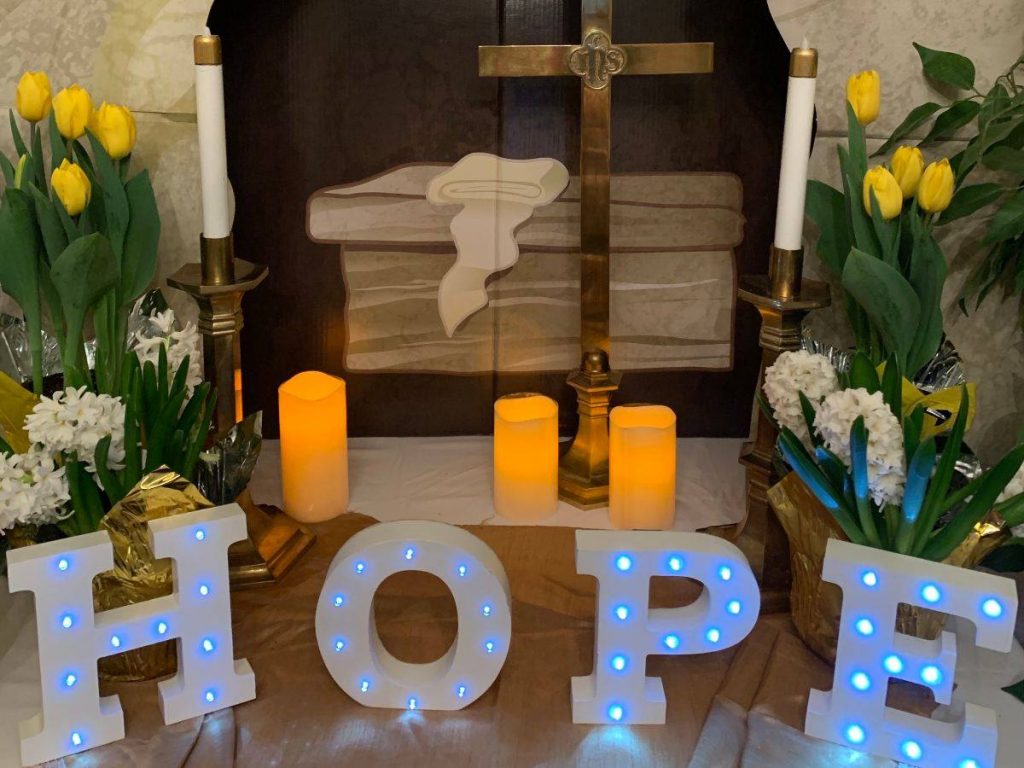 The once beautiful open-air courtyard in the entrance of a New Jersey hospital has been replaced by locked doors, warning signs and a police officer. Reflecting and radiating the hope and courage that lies within, however, are sporadic sounds of The Beatles song, “Here Comes the Sun” played over the PA system to signal that a COVID-19 patient has recovered as well as sporadic “clap-outs” and signs everywhere showing the previous day’s recovery numbers. Albeit small gestures, the impact is powerful.

As George Harrison wrote in 1969, sometimes all it takes is a ray of sunshine to brighten a day and offer some hope. Much like the Beatle touted the power of the sun, these glimmers of light are sometimes what sustain us in difficult situations.

Throughout Greater New Jersey, there are people like Don Gebhard, Diane Dyson and Stephen Faller, United Methodist deacons who are working every day to share that light with others in hopes of minimizing suffering and sustaining a more abundant life.

They are the dedicated people who are on the frontlines of the COVID-19 health crisis—chaplains, doctors, nurses, health aides, counselors and other support staff who courageously help others, often at the expense of their own fears, frustrations and hurting.

Don Gebhard takes strict precautions every night he returns home from his full-time role as a chaplain that he started in January at Hackettstown Medical Center. He called this crisis “a marathon, not a sprint,” so whatever measure he needs to take is what he is prepared to do.

“It’s so difficult not being able to hug someone whose mask is soaked with tears, often not allowed into the patient’s room,” said Gebhard. “This suffering has no boundaries with so many layers. It’s raw humanity, big time grief—the love with no place to go.”

He added that the only way to comfort people is with his words, sometimes only over the phone, so every day he struggles to find the words that bring the most solace.

Gebhard, who serves at Trinity UMC Hackettstown and had been a university chaplain for 15 years before taking on this new role, comforts patients as well as family members and staff who represent many different faiths, backgrounds and socioeconomic classes.

He noted that the need has exponentially grown as evidenced by the hospital’s wellness support line, which has been receiving triple the amount of calls as usual.

“The mental health piece of this is inordinate,” said Gebhard, who said he has instituted wellness walks and prayer times in the hospital chapel for staff in an effort to help them cope and heal.

In the face of such adversity, Gebhard said he is renewed by the sporadic “clap-outs” when a patient recovers and is heading home, or the recent recovery of both a mother and son after the son saved his mom doing CPR just weeks earlier. And then there are the texts he receives from colleagues, friends or family members like his friend and fellow chaplain, Randy Parks, or the freshly-cooked meals he and his colleagues receive from local restaurants or the many homemade masks and head coverings they have received.

“It’s this kind of kindness that sustains us,” he said. “We are grateful for each and every one of these moments and for the anchoring and strength I get from God. I feel like I was prepared for this journey.”

Handwritten notes and cards are what also keep Diane Dyson going in the face of death as a nurse at Hunterdon Medical Center in Flemington. A nurse since 1985, Dyson had previously been working in a step-down unit in the hospital, but when the number of COVID-19 patients pushed the total number of patients to three times as much, she was transferred to work with COVID-19 patients in a cardiac unit that had recently been converted into an ICU.

“This is for sure the hardest part of my career,” said Dyson, who noted that she has seen more people die from this virus than in the entire eight years she has worked at the hospital.

“As a deacon, it has always been part of my role to offer people a spiritual aspect, to consider their spiritual needs. Now I also do this for the families.”

Dyson, who also serves Bloomsbury UMC, recalled recently how she set up a Facetime with the daughter of a 71-year-old man who was a patient. “It was difficult but so necessary for the family.”

“Sometimes I feel like I’m spread so thin, but my calling is to be a nurse and to care for people spiritually and holistically, doing whatever it takes.”

When not caring for the sick, Dyson said she takes long walks and spends time with her husband, Drew, who is a full elder and executive director of the Princeton Senior Resource Center, to help rejuvenate so that she is better prepared for her next 12-hour shift. She also recently had communion with friends via Zoom and took a brief departure from the stark reality to jokingly lament about the poor timing she and Drew had in joining a gym just one month earlier.

For Stephen Faller, who is a chaplain and a clinical pastoral education supervisor at a large Trenton hospital, going for long walks to work through his frustrations is not possible so he spends his time at work on a scooter. Faller has cerebral palsy, which prevents him from being on his feet in large environments like a hospital for long periods and make new ways of doing ministry like those involving Zoom more difficult.

“I’ve dedicated my whole ministry to face-to-face connections,” said Faller whose foray into chaplaincy began over two decades ago and specifically in New Jersey following the 9/11 tragedy.

“This is upending ministry. When 9/11 happened, I was in a tiny chapel with 15 seats packed with about 80 people. That kind of support obviously can’t happen today.”

He added that without that connection, bringing meaning is very difficult. “My goal is to find ways to serve the people who need it most,” said Faller who added that doctors and nurses who are actively being traumatized every day need help.

He added, “We have to think outside the box all the time.” One way he is doing that is by setting up giveaways for the National Day of Prayer on May 7, which ironically coincides with National Nurses Week (May 6-12), in hopes of boosting morale.

“It’s all about reimagining how this can work.”

In his own personal life, Faller said he worries about the safety of his wife, Heather and their two daughters, so he has been living on the first floor of their house while the rest of his family lives on the second floor.

“I have spent hours Zooming people I love since February. It has been rough.” As an alternative, Faller said he is looking for an RV so that he can further limit his exposure to them.

With the COVID-19 caseload in New Jersey hospitals eclipsing 100,000 in April and the prospect of a vaccine at least a year away, the future is filled with uncertainty. But the burden those on the frontlines are carrying as they light the way for so many needs to be lifted by those away from the frontlines for at least several months to come.

Until we reach the other side of this pandemic, people throughout GNJ are supporting them the best way they know how, deeply rooted in Christ.

Clergy resources can be found on GNJ’s COVID-19 resource webpage under “Clergy Care.” GNJ will continue to feature GNJ heroes on the frontlines. If you have a story idea, please share it with Heather Mistretta at hmistretta@gnjumc.org.