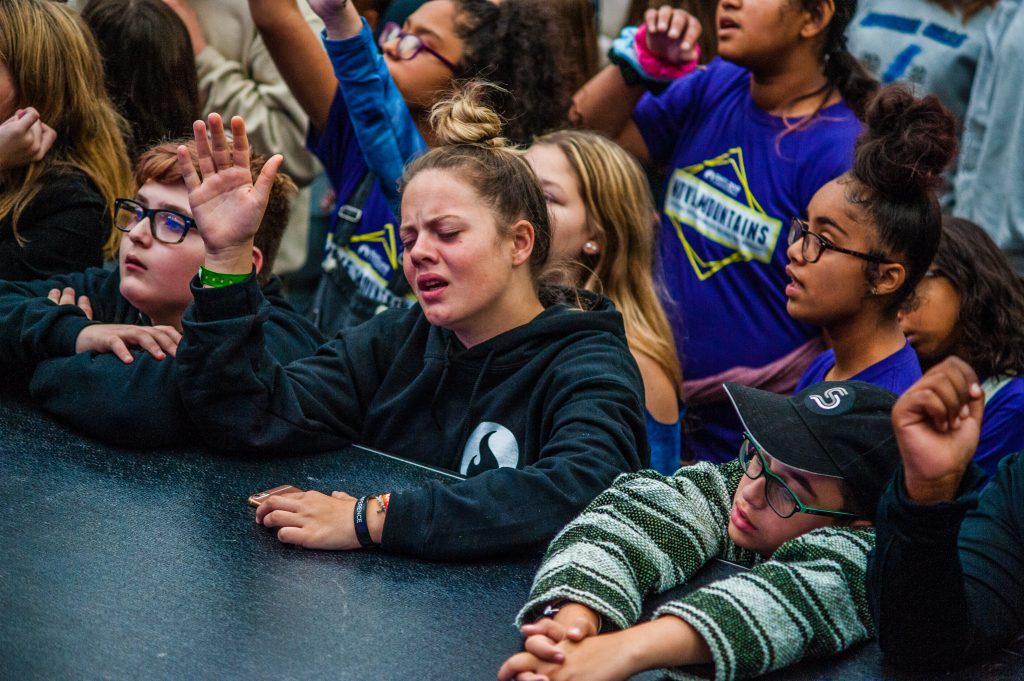 More than 1,300 people gathered in the Wildwoods Convention Center this past weekend to “move mountains”…and diapers as part Next Generation Ministries’ 2019 IGNITE Conference, an annual event designed to help teens connect with God in a fun and inspiring way.

“This event never ceases to amaze me,” said Eric Drew, executive director of Next Generation Ministries. “From our talented musicians and hysterical improv guys to our enlightening workshops and diaper bundling party, I’m leaving today with a full heart and a hoarse voice. Can’t wait to get our IGNITE Communities going on November 17!”

Kicking off the event on Friday night were the Panic Squad, an improv comedy troupe who first started making people laugh in the mid-1990s. They also performed on Saturday night to a packed convention center.

“Improv fits us. We’ve never performed the same scene more than once,” said founding member Andrew Bright who like the others in his group encouraged spontaneous participation from the audience…and got it.

Grammy-nominated Britt Nicole revved up the crowd as she performed her hit singles all the way from Nashville Friday night, and the Australian trio known as Verses shared their latest hits derived from scripture, telling the teens to embrace who they are right now because God loves them.

But the weekend wasn’t all loud music and laughs. IGNITE also tapped into the more contemplative sides of the teens who attended. There was a small group time on Saturday morning where adult leaders and their teens were encouraged to have healthy discussions and learn more about each other, and husband and wife team, Joanne and Glenn Winzer hosted a reflection room where teens were able to express themselves in solitude and with no judgment.

Workshops, which provided teens with good opportunities to step outside their comfort zones, ranged from names like “Here I am, Lord” by the UM Army, “Know Your God-Given Purpose” by ARISE and “Relationships” by Nicole & Jevon Caldwell-Gross to “What Does Hip-Hop Have to Do with Jesus” by Rev. Kermit Moss, “Songwriting & Rapping the Word” by New City Kids and “Art, Dance, Believe” by Christian Drama School of NJ.

“It’s all about empowering our youth to be leaders and to not be afraid to pursue their dreams,” said Annie Joseph, the music director at New City Kids who encouraged teens to rap scripture while drumming on a five-gallon bucket.

Amid all the fun and learning, teens helped bundle up nearly 24 thousand diapers as part of The Maker’s Place’s mission project that is dedicated to helping families in Trenton. The nonprofit’s founder Michael Reed had a truck parked outside to deliver the mounds of diapers back to the city.

Rounding out the weekend was a bonfire concert on the beach Saturday night by ARISE, a network ministry for worship leaders, musicians and like-minded people, followed by a group communion service to commemorate World Communion Sunday that morning.

Finally, guests were invited to keep the fire going by signing up for the new IGNITE Communities, which will begin on November 17 at four different locations throughout New Jersey.

“This event helps me tremendously every year,” said a 17-year-old attendee. “My life has been full of trouble this past year, but I came here and feel like I belong.”