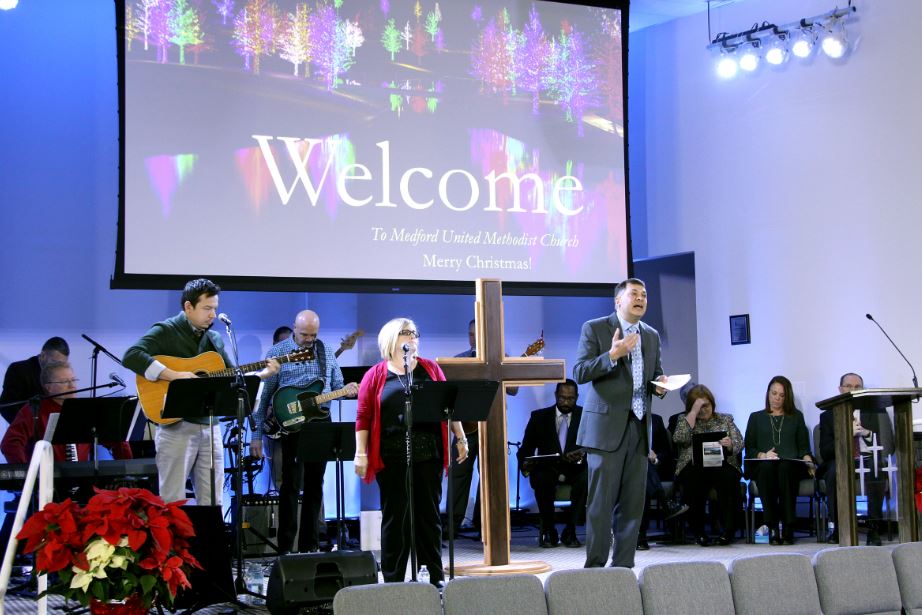 After 14 years of steady perseverance and faith, Medford UMC celebrated the opening of its Family Life Center with 400+ attendees. Photo provided

MEDFORD – The process began in 2004 and has been quite a journey for the congregation, but after 14 years of tremendous perseverance the Medford United Methodist Church’s Family Life Center was dedicated with more than 400 attendees on December 17, 2017.

Bishop John Schol consecrated the building during the church’s worship service and preached at the service.

“One of the cool things we did was a liturgy where we passed several items representing our mission, our vision, and our history, up to the stage including a chair from our original building that was constructed in the 1850s,” said Medford UMC senior pastor Rev. Joe Monahan. “During a service two years ago to culminate our capital campaign for the building, we passed many of the same items from the existing building out to a tent on the site of the Family Life Center near the main entry. At the dedication service, we were able to pass these items to the altar area.”

“Our children participated in passing the items to the stage, the choir sang in the service and our praise band led worship,” Monahan added.

The Family Life Center is a multi-purpose facility that was built for worship, recreation, dining and fellowship. The overall building footprint is 9,900 square feet. An open house for the community was held in early January.

The building seats approximately 400 for worship and about 320 for dinner. As for recreation, it is set up for high school regulation volleyball and half-court basketball.

The building is currently being used mostly for worship and youth programming though it has hosted several district events.

“We have had interest from several different community organizations including some art groups and local camps. We have also been approached about potentially hosting a voting location in the new building. We are sorting through who the right partners are for us and how to prioritize usage. We hung a large (12′) high) backlit cross and flame on the building and since then, the inquiries have increased dramatically.”

“The latest campaign gathered commitments of over $1 million and we are still collecting those pledges that will wrap up in February 2019,” said Monahan. “We worked with Horizons Stewardship on our last campaign and when we are done we are projecting a mortgage of about $600,000.”

The process of having the center built has been a long one with much work to navigate approvals not only at the township level but also from Burlington County and from the Pinelands Commission.

“It was very challenging and required a tremendous amount of perseverance,” he said. “Along the way, we had to conduct three capital campaigns to raise the money and we also had to undergo three redesigns to create a project that met our needs and was affordable.”

Church member Gordon Curtis was the project manager invested in the effort from the beginning. Bill Frame led the original building committee and church member Michael Pagnotta was the original architect.

“Ultimately it wasn’t Mike’s plan we built but he and Bill helped us get the approvals needed which was super important,” stated Monahan. “In terms of the actual construction, we did the site and utility work phase in the fall and winter of 2015, then the building construction itself began in May 2017 and was completed in December.”

The Family Life Center is located on the church property which is comprised of the main church building, sanctuary, fellowship hall, offices and an education wing housing a preschool and other classrooms.

“We built this church in the early 1970s and added the education wing in the early 1980s,” Monahan said. “Also on the property is what had been the parsonage – it is now called The Annex and we use it for the youth programming and small group ministry.”

The original Medford UMC was at another location in the village of Medford from the 1820s until the 1970s when the church moved to its present location.

Monahan explained that the center was largely driven by a need for more worship space. Contemporary worship was held in a hall that held only about 140 people comfortably.

“Since we opened we have had 150 to 200 in our contemporary worship service each week,” he said. “It was also really important to us to provide a space where our youth could have a good time to play sports and games. We think this space provides us with an excellent opportunity to connect with and partner with the community in new ways.”

And now that the Family Life Center has finally come to fruition, Monahan recollected that one of the most important parts of the construction process was prayer.

“Throughout the process we took the building itself very seriously and thought through details carefully,” he said. “But we also understood that the building was really just a container for ministry. We had a ton of creative ideas around prayer. Our Associate Pastor Kathleen Stolz also played a huge role. We surrounded the construction with prayers – written on structural steel, hidden in the wall, and painted by children on stones we scattered around the foundation. The prayers were tangible reminders along the way of how God is faithful to us when we persevere in prayer and faith. There were many times when I heard, ‘This will never get done.’  At times, I thought that to myself. But God is faithful.”

For more information about the Family Life Center at Medford UMC click here or call 609-654-8111.