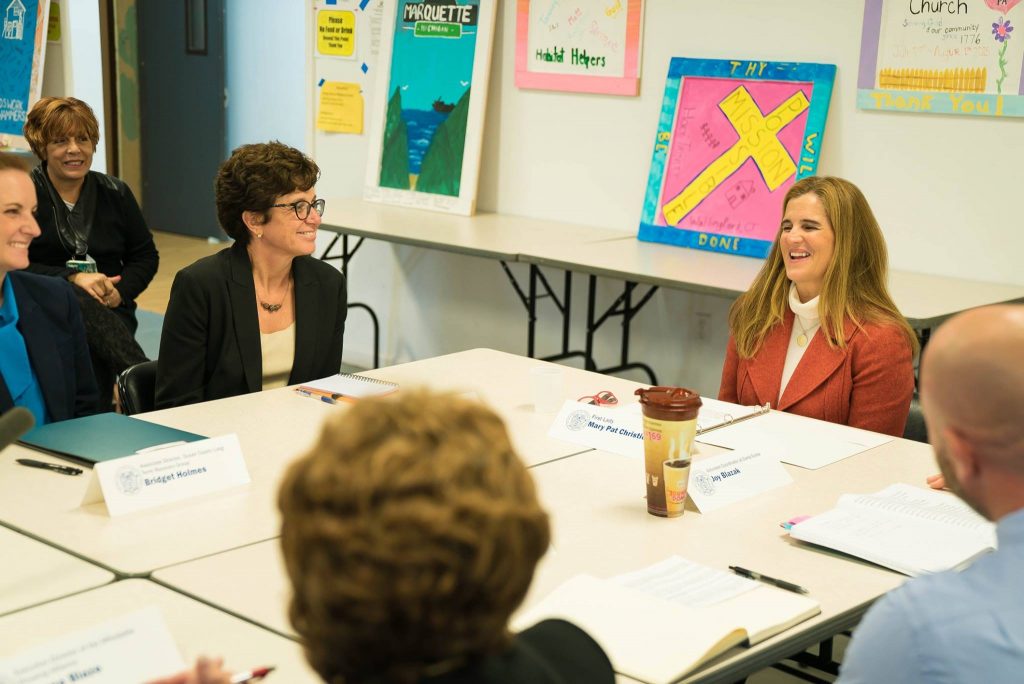 The roundtable was held on Oct. 25 at Camp Evans, a former military installation in Wall Township that with the help of a $125,000 Relief Fund, has been transformed into a volunteer host center in case of future natural disasters.

“Camp Evans has been a tremendous launching point for Sandy recovery efforts in Monmouth County,” said Mrs. Christie. “I’m proud to see first-hand Sandy Relief Fund grants in action with the culmination of this volunteer host center. It’s unbelievable that five years after Sandy, volunteers from around the country continue to come to New Jersey to bolster our recovery. What began as a means to help New Jersey rebuild after the storm has evolved into a committed partnership of individuals and organizations working together to make a difference in the lives of all those impacted by Sandy.”

In creating the HSNJRF, Mrs. Christie’s objective was to form a nonprofit that would have a sustainable, long-term impact, focusing on programs to address unmet needs of communities affected by Sandy.

“A Future With Hope and United Methodists are grateful to the tens of thousands of donors who contributed to New Jersey in the aftermath of Superstorm Sandy,” said Ridgely. “Because of their generosity, along with the fiscal stewardship of Mrs. Christie and her staff, A Future With Hope and our partners continue to help homeowners on the long road to recovery.”

Kevin McGee, Director of New Jersey Recovery at SBP, Inc., praised the relief fund’s help in empowering the rebuilding of homes for the most vulnerable members of communities in Monmouth and Ocean counties.

“Simply stated, the Relief Fund’s willingness to partner with local nonprofits on the ground has resulted in returning safety and security to hundreds of families who otherwise would not have been able to return home.”

A total of $41 million was raised by the HSNJRF from over 35,000 donors worldwide. Contributors included corporations, foundations, foreign countries, community organizations, and individuals. Ninety-five percent of funds, totaling $37.8 million were efficiently distributed in support of 109 nonprofit organizations throughout New Jersey

HSNJRF funding and accomplishments include:

250,000 total New Jersey residents helped through the grants provided by the Relief Fund

2.5 million meals were delivered to those affected in the aftermath

3,060 households were provided with mental health and emotional support service

The NJHSRF responsibly distributed all funding entrusted to it and closed in March of 2016. It was the largest philanthropic funder of New Jersey’s recovery.

This story was adapted from a press release issued by the office of Governor Chris Christie on Oct. 25, 2017.